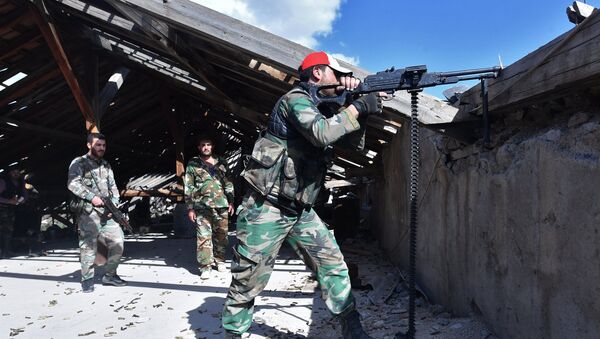 The Tiger Forces (Qawat Al-Nimr) of the Syrian army, established in 2013, participate in the most severe battles on the frontline. The elite unit had previously participated in an anti-Daesh offensive in the south of Damascus.

The Syrian military command has decided to transfer the elite Tiger Forces army formation from Damascus to Homs province before the start of a major offensive against armed opposition militants, the Arab portal al-Masdar reported on Saturday.

Until now, the superior military formation had participated in an offensive operation against Daesh* terrorists in the southern parts of the Syrian capital.

Since the offensive against terrorists in Damascus does not currently demand the support of the elite unit, the Tiger Forces will be moved to the northern areas of the Homs governorate.

Two #ISIS slayers from Tiger forces, the most fearsome special unit of #SyrianArmy credited with all major breakthroughs against Daesh. From Palmyra, Homs, Aleppo to southern Damascus, they were first to hit the enemy area. pic.twitter.com/uthAbayZIf

​Anti-Daesh Operation in the Area

Meanwhile, the Syrian forces have stepped up their efforts to eliminate the last pockets of terrorists in Damascus, engaging in intense combat that included shelling and arms fire against Daesh militants in the southern districts of Damascus, the Reuters news agency reported Saturday.

Since April 20 the Syrian government has been pursuing an offensive in the area, following Daesh's refusal to leave the city.

At present, forces of the Syrian Arab Republic have defeated the last pockets of terrorists in Al-Aasali, Jura and Al-Hajar al-Aswad, as the SANA agency reported the day before.

The country has been engulfed in a civil war since 2011, with numerous opposition factions and terrorist groups like Daesh striving to topple the government of President Bashar Assad and to establish their control over the state.

Two principal powers have been supporting anti-terror operations in the region: the US-led coalition, conducting airstrikes in the area without Damascus's consent or a UN mandate, and Russia, which joined the offensive in 2015 upon Assad's request. A large portion of the Russian forces were withdrawn from the country last year after Syrian government forces regained control over the majority of the state's territory. Now the Syrian troops are eliminating the last pockets of terrorist resistance.