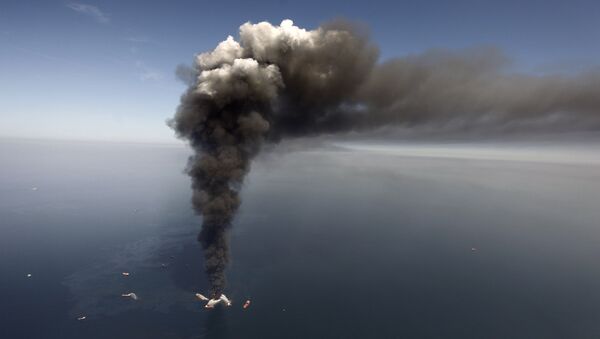 © AP Photo / Gerald Herbert
Subscribe
In a spectacular contortion of logic, British Petroleum - seeking highly-profitable licenses to drill for offshore oil in southern Australia - claimed that destructive chemical spills would be a boon to coastal communities.

Inequality Like You Mean It: 1% on Track to Control 66% of Global Wealth by 2030
In a bid for permission from the Australian government to drill for oil in sensitive marine habitats, fossil-fuel giant British Petroleum (BP) asserted that coastal towns would benefit from potential ecological catastrophe because local commerce would be boosted by subsequent clean up efforts.

The eye-opening assertion was part of an environmental-impact plan submitted in 2016 to Australia's National Offshore Petroleum Safety and Environmental Management Authority.

Since withdrawn following regulator scrutiny, the environmental impact plan seeking to support the drilling of two new offshore oil wells brought to mind to many the appalling ecological disaster of BP's enormous 2010 Deepwater Horizon oil spill in the Gulf of Mexico, according to smh.com.au.

The largest marine oil spill in history, BP's 2010 Deepwater Horizon explosion saw over 210 million gallons of crude oil dispersed over some 68,000 square miles of ocean, impacting the ability of an untold number of species both flora and fauna that relied on the shallow tropical waters to survive.

Government authorities studying the 2016 BP proposal identified many significant issues, including the assertion by the company that "in most instances, the increased activity associated with cleanup operations will be a welcome boost to local economies," cited by The Sydney Morning Herald.

BP went so far as to suggest to a federal Australian agency that fuel spills would be considered a "socially acceptable" price to pay for employment and economic boosts brought to far-flung coastal communities by fossil-fuel employment opportunities.

The Australian licensing body noted other objections to the drilling proposal, including its effects on tourism and sea-going mammals — particularly on migrating whales.

BP subsequently rebranded the formal drilling proposal and its surprising assertions as being akin to correspondence regarding an ongoing process, "given the project did not proceed," according to Smh.au.com.

BP has dropped attempts to gain oil drilling licenses in the region, transferring those leases to Norwegian-owned petroleum giant Statoil.