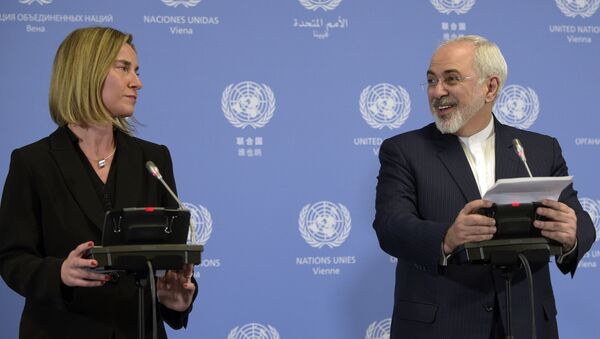 © AFP 2023 / HANS PUNZ
Subscribe
International
India
Africa
The US risks finding itself out in the cold if it continues to push its anti-Iranian agenda, Sputnik contributor Igor Gashkov writes. Calling upon its European allies to sever ties with the Islamic Republic, Washington has failed to take EU economic interests into consideration.

The Iran issue has deeply divided The United States and Europe: while Washington has declared Tehran a sponsor of terrorism, EU member-states continue to invest in the country's economy, Sputnik contributor Igor Gashkov writes.

"There is an immense difference between Europeans and Americans on this issue," Director of the Center for Middle Eastern and Central Asian Studies Semyon Bagdasarov told Sputnik. "A big contract was signed by Tehran and the French to modernize the [country's] entire aviation fleet. Paris and Berlin are actively investing in the production of Iranian hydrocarbons. European business has great prospects in Iran, and new sanctions threaten to frustrate cooperation. The interests of the US and the EU are diametrically opposed to each other here."

Hot Debate Around Iran Nuclear Deal on Final Day of Munich Security Conference
According to Gashkov, the United States is ready for a prolonged conflict with Iran. However, to thwart Tehran, Washington needs the EU's assistance. Addressing NATO members and allies at the Munich Security Conference, US National Security Advisor H.R. McMaster emphasized the necessity to cut off funding for Iran's Islamic Revolutionary Guard Corps (IRGC), which was designated as a terrorist organization by the Treasury Department in October 2017.

"When you invest in Iran, you're investing in the IRGC," McMaster said, as quoted by Defense News. "And when we look at the biggest trading partners with Iran, we of course see Russia, we see China. But we also see Japan, South Korea and Germany. It's time to focus business intelligence efforts to figure out who we are really doing business with, and cut off funding."

Furthermore, Washington has repeatedly threatened to exit the Joint Comprehensive Plan of Action (JCPOA), commonly known as the Iran nuclear deal, which was signed by Iran, the European Union and the P5+1 group of nations (the United States, Russia, China, France and the United Kingdom plus Germany) in July 2015 under the presidency of Barack Obama.

If the agreement is annulled and the sanctions regime against Tehran is resumed, the restrictions will deal a blow not only to the Middle Eastern economy, but also to European states' business interests, Gashkov noted.

Iran Vows to ‘Level Tel Aviv’ if Israel Attacks Iranian Targets
However, in contrast to its European allies, Washington has nothing to lose.

According to the journalist, in the Middle East the US relies on Israel and Saudi Arabia — Iran's longstanding rivals.

At the Munich conference, Israeli Prime Minister Benjamin Netanyahu addressed Iran's Foreign Minister Mohammad Javad Zarif, while demonstrating what he claimed was part of an Iranian drone shot down by Israel earlier this month: "Do you recognize this? You should. It's yours. You can take back with you a message to the tyrants of Tehran: Do not test Israel's resolve."

On February 10, Tel Aviv reported that it shot down an Iranian drone, which was followed by the Israeli Air Force (IAF) hitting several military targets in Syria. Once Israeli aircraft crossed the Syrian border, the country's air defenses opened fire, according to Syria's state-owned SANA news agency. As a result, an Israeli F-16 fighter was downed.

For his part, Iranian Prime Minister Zarif denounced Netanyahu's remarks as a "cartoonish circus which does not even deserve the dignity of a response."

In an exclusive interview with Sputnik, the Iranian foreign minister highlighted the importance of the JCPOA, stressing that "it's clear that if the US decides to withdraw from the deal unilaterally or break the deal, it will isolate itself, becoming an outsider."

Zarif underscored that European politicians oppose any revision of the Iran nuclear deal, adding that they "stand for preserving their own interests and agreements within the JCPOA."

"The international community, except the Trump administration, Israel and two or three Middle Eastern countries, understands that the JCPOA is an international agreement and not a bilateral treaty between Iran and the US," the Iranian foreign minister emphasized.

Iran Has No Military Bases in Syria - FM Zarif
Speaking to Sputnik, Irina Fyodorova, a senior researcher at the Institute of Oriental Studies of the Russian Academy of Sciences (RAS), stressed that the termination of the Iran nuclear agreement would not be in the interest of the EU and Russia.

"Revocation of the nuclear deal poses a danger for the whole world, since it will make it impossible to reach an agreement with North Korea, which has its own nuclear program and problems similar to those of Iran," she stressed. "And this does not correspond to the interests of either Russia or the EU. In addition, it is important for Europeans to return to the Iranian market, which is promising and growing, while the US is hindering this."

On the other hand, the termination of the Iran nuclear deal is strategically disadvantageous for the US, the Russian academic noted, adding that therefore Trump's stance has prompted fierce criticism on the part of the Democrats.

"Washington is now trying to restore its position in the Middle East, but the withdrawal from [the JCPOA] will hardly help [the US to reach this objective]. It will appear that the United States is incompetent: Under one president they conclude an agreement, and under the other they rip it up," Fyodorova concluded.