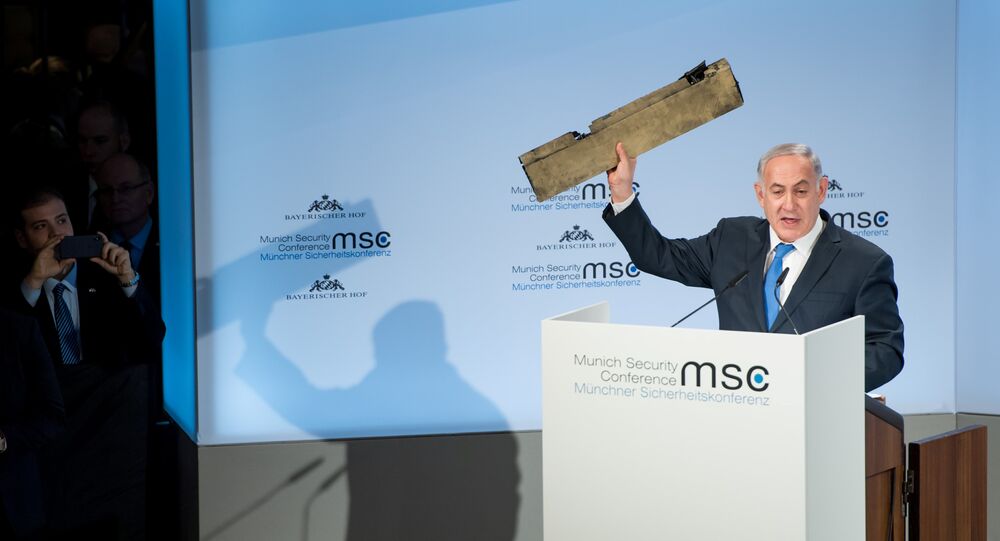 MUNICH (Sputnik) – Iranian Foreign Minister Mohammad Javad Zarif and Israeli Prime Minister Benjamin Netanyahu on Sunday traded barbs and threats, speaking about Iran nuclear deal and Tehran's role in the settlement of conflicts in the Middle East, during the final day of the 54th Munich Security Conference (MSC) in Germany.

The politicians discussed such major regional security issues as the Syrian settlement, the Palestinian-Israeli conflict, and the situation in the Persian Gulf.

Do Not Test Israel's Resolve

Netanyahu said on the final day of the MSC that he was aware of Iran’s alleged plans to unite Tehran and Syria’s Tartus to create a single state.

"Mr. Zarif, do you recognize this? You should. It's yours… Don't test Israel’s resolve," Netanyahu said.

During his speech at the MSC, Netanyahu criticized the Joint Comprehensive Plan of Action (JCPOA), commonly referred to as Iran nuclear deal. The multilateral agreement should be scrapped if Tehran continues its nuclear enrichment research, Netanyahu said.

"Such a radical regime would be unrecognizable in its aggression once it has atomic bombs and the means to deliver them. So you have to fix it. Whether you can do it within the deal, fine, if you can't, you should scrap it," the Israeli prime minister pointed out.

© Photo : Matthias Schrader
Pence: Europe Either Goes With US or Stays in 'Deeply Flawed' Iran Nuclear Deal
The Israeli official also called for tough sanctions against Iran to prevent Tehran from developing its nuclear program which, according to Netanyahu, is not limited to the peaceful use of nuclear energy.

Jubeir supported Israel’s stance on Iran nuclear deal, saying that the checks of the International Atomic Energy Agency (IAEA), which is monitoring the JCPOA implementation, are not enough, as they should also be held at Iran’s military sites, which is not stipulated by the deal.

The JCPOA does not contain Iran’s aggressive behavior, Jubeir pointed out.

Netanyahu, in his turn, noted that the Iranian alleged aggression contributed to the rapprochement between the Israelis and the Palestinians.

John Kerry, the former US state secretary, who has participated in person in the talks on the JCPOA, has however spoken in support of the deal during the MSC. The scrapping of the agreement might provoke a military conflict in the region, Kerry suggested.

Kerry also expressed disagreement with Israel’s claims that Iran would possess nuclear weapons in 10 years. The US ex-state secretary, however, noted that the JCPOA failed to cover a number of issues, such as respect for human rights in Iran.

Zarif, who has been addressing the MSC several hours after Netanyahu, called for a new security architecture in the Persian Gulf, which implies that there should be "a strong region, rather than a strong man in the region."

"We want a strong region. We do not want to be the hegemon in the region, as we believe that the era of hegemony has long passed regionally as well as globally," the official said.

© REUTERS / Ronen Zvulun
Netanyahu: Europe Must Preserve Nuclear Deal With Iran
The Iranian diplomat called for the new security architecture in the Persian Gulf to be based on various measures to strengthen trust between the regional players, from joint military visits and measures to increase transparency in the area of armament to notifications about holding military drills and decreasing defense expenditure. Zarif expressed hope that such measures could lead to the conclusion of the regional non-aggression pact.

Zarif called for a strong region where various countries, even those who have been rivals, coexist and contribute to security, noting that hegemonic tendencies by any regional and global power result in instability. The official went on to say that such situation is "not in goodness of anybody."

The official mocked a demonstration by Netanyahu of a piece from an Iranian drone allegedly shot down last week by Israeli forces, branding it a "cartoonish circus."

Speaking about the JCPOA, the Iranian foreign minister said that Tehran would not be the first party to withdraw from it.

"I can assure you that if Iran’s interests are not secured [in the framework of the JCPOA], Iran will respond, will respond seriously and I believe it would be a response that people will be sorry for taking the erroneous actions they did," Zarif noted.

© AP Photo / Ronald Zak
EU Reiterates Commitment to Iran Nuclear Deal after Trump’s Decision
In July 2015, Iran and the P5+1 group of nations — the United States, Russia, China, France and the United Kingdom plus Germany — signed the JCPOA. The agreement stipulates a gradual lifting of sanctions imposed on Iran in exchange for Tehran maintaining the peaceful nature of its nuclear program.

The deal was sharply criticized by the US President Donald Trump, who refused to certify that Iran was in compliance with the agreement in October but stopped short of pulling the United States out of the pact.

In January, Trump announced that he would waive sanctions on Iran as required by the JCPOA, but said this would be the last time. The US president also threatened to withdraw the United States from the deal if it is not amended and asked the Congress to address the flaws in the "terrible Iran nuclear deal."

The settlement of the Syrian crisis has also been discussed during the last day of the 54th MSC edition.

De Mistura said that the unity and sovereignty of Syria must be preserved to avoid the process of the country’s fragmentation into smaller parts.

"The biggest danger in Syria at the moment is fragmentation. And that it is terribly dangerous because, if we go into leaving it as such and not maintaining… the sovereignty of the country in unified way, we may get a thing to Balkanization or a chronic Balkanization [of Syria]," de Mistura said.

Summarizing the outcome of the MSC, which was held under the motto "To the Brink — and Back?" conference’s head Wolfgang Ischinger said that at the beginning of event he hoped that the outcome of the forum would have allowed to remove the question mark in the motto. However, the participants of the conference did not manage to resolve all issues on the international security agenda and thus Ischinger expressed doubt that the motto's question mark can be removed and underlined the big work ahead for ensuring international security.