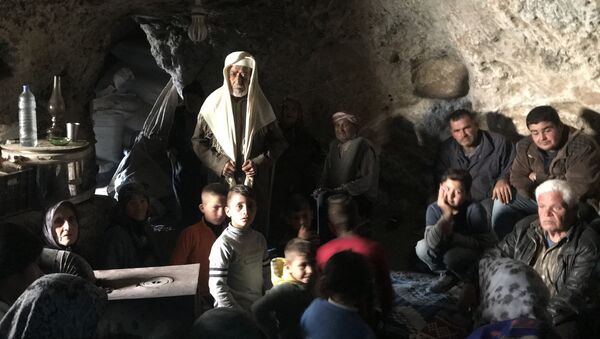 AFRIN (Syria) (Sputnik) - Residents of Jindires town in Syria's Afrin slowly and meekly left their dark basements after learning that foreigners were here, but stayed near their shelters, because Turkish artillery and air force units might strike anytime.

A RIA Novosti correspondent, one of the first journalists to visit communities in northern Syria, where the Turkish Armed Forces are conducting their military operation, learned about life inside mountain caves and danced with Kurdish children under a stairwell while military planes pounded Afrin.

On January 20, the Turkish General Staff said it had launched a military operation against alleged Kurdish terrorist units in Syria’s Afrin. Turkish military units are supported by militants from the Free Syrian Army. Syrian authorities resolutely denounced Turkish actions on their territory. Moscow urged the warring parties to display restraint and to respect Syria’s territorial integrity.

The first days of Operation Olive Branch saw all-out artillery barrages and airstrikes that hit all the main local communities, a village and Afrin, the capital of Afrin district.

Ankara Renames US Embassy Street After Turkish Operation Olive Branch – Mayor
The only local hospital boasting average equipment is receiving tens of wounded patients daily. According to authorities, almost 150 civilians were killed in the first two weeks, and about 400 were injured.

Intense fighting between Kurdish guerrillas and pro-Turkish forces is raging in border villages and on local heights. Information on casualties, frontline operations and successes is contradictory. According to the Turkish military, over 1,000 members of Kurdish self-defense forces have been killed. Local self-defense fighters report less substantial casualties of the Turkish Army and paramilitary units and provide video footage of knocked-out tanks and other armored vehicles. The situation at the front remains more or less stable. Turkish units have failed to seize the canton’s main communities, including Afrin and Jindires, and fighting has not spread to nearby villages either.

Aimed for Terrorists,  Hit Civilians Instead

Dr. Abdul, a pharmacist with a Soviet university degree, drives us to Jindires. We leave right after obtaining a permit to move within the canton.

Jindires is located about 19 miles from Afrin. We see countless olive gardens on both sides of the road. Afrin Canton apparently manufactures most of Syria’s olive oil and soap. Over 40 million olive trees grow here.

"Can you imagine? They called this Operation Olive Branch. This is sheer mockery! Here are our olive-trees, the symbol of peace. Let me tell you a secret: we are calling our operation against them Foxhunt. A real hunt is now on at the border, and you will see what’s going on here," Abdul said, as we approach the town.

Pentagon Sees No Indication of Turkey's Plans to Expand Olive Branch to Manbij
Jindires looks like a ghost town, with a car driving by from time to time. And the streets are almost empty. We park our car in the courtyards, under a roof and hugging the building’s wall.

"This seems more reliable, and we need the vehicle to leave this place," the smiling doctor explains.

Children, followed by adults, start slowly leaving the damp basement, and no one dares venture far away from the entrance.

"Please come in and see how we live. There are 80 of us here, mostly women and children, we have not showered normally for over two weeks, and we sleep on a damp floor because we are afraid of new attacks," a woman living inside the underground garage with her three children stated.

The underground shelter is divided into two sectors, with the Kurds, residents of the town, occupying the first one. The second sector belongs to Arab refugees who fled from neighboring governorates to Jindires several years ago.

All the light comes from LED flashlights, there are also two small gas cylinders with a burner, blankets, thin mattresses and some canned food inside the underground shelter.

Turkish 'Olive Branch': General Staff on Results of Offensive in Afrin
"We venture out during the day and come back quickly after collecting some food and personal items. We know that the attacks start at 3 p.m. and last until 5 p.m.; then they resume from 9 p.m. through 5 a.m. It is strange that there are no attacks right now," an elderly man explained.

A motorcycle with two self-defense fighters drives up to the shelter, and they ask to see our IDs and a document authorizing us to visit Jindires. After checking all essential documents, the duo’s commander radios to headquarters and apologizes for tight security measures.

"You see, two days ago, militants posing as refugees entered a neighboring community and tried to stage an act of sabotage there," Ali, a self-defense fighter, told us.

Ali agrees to take us to Old Jindires, the hardest hit during bombardments, via the safest route. We follow him single file, hugging the walls of intact buildings. I recall book illustrations about the siege of Leningrad when signs on the walls of local buildings warned people that this side of the street was most dangerous during artillery attacks.

Most homes in Old Jindires have been destroyed almost completely, with the bravest town dwellers inspecting what’s left of their homes.

Ali escorts us inside the mosque. "Look, they didn’t even spare the mosque," he said, pointing at the ceiling. Looking up, we could see three big holes punched by shells, and the Quran’s books, all covered with dust and concrete fragments. An unfamiliar old man sits down in the opposite section of the prayer hall and starts carefully wiping the dirt off the holy books. Turkish shells did not spare the local cemetery either and damaged some new graves.

SDF Forces Claim 308 Turkish Soldiers Have Died During Olive Branch Op in Afrin
After visiting the mosque, we decide to return to the car and drove off to find a village where Kurdish refugees are hiding inside mountain caves. Ali offers to help, and we go together. The young fighter insists that we call on his parents to have a snack.

I hear the sound of gunfire nearby while lunching with his parents.

"Unfortunately, there are many enemy agents here. It appears that they told the military about the presence of foreigners in Jindires; that’s why the artillery barrage stopped. But it resumed after we left," Ali noted.

The village where Jindires residents mostly fled is located in lowland surrounded by bald mountains. The village elder Khaltan Hassan Vasuk says some 10,000 people are living in the caves. The humanitarian situation is close to a catastrophe. There is a shortage of drinking water and food. Olive oil has become a staple for both locals and refugees. They pour it in aluminum flasks and hide it away, afraid that an ordinary storage could be bombed.

"Right now everything is relatively calm so everybody is outside. The weather is nice, they can breathe some fresh air. It is very humid in the caves and some children are having problems with their lungs and breathing. There is no hospital here, so we have to collect money and send someone for medicine. We hope the international community will finally open its eyes to what is happening and send us help, especially medication," Vasuk said, leading us to a cave near the village center.

Operation Olive Branch Could Actually Improve Turkish-Syrian Ties – Analyst
Several dozen people are living in the damp rock hollows. The cave has been divided in two parts. The one deeper serves as a shelter during air raids. The closer part is for sleeping.

"There is not much room here so they sleep both here and there. They lie down close to each other. It is warmer this way, and everybody gets some space. Look, does anybody here look like a terrorist? Why bomb us?" Vasuk asked in despair.

Abdul recalled that before the operation, a peace policy was imposed on the Afrin area. Nobody was allowed to carry around weapons, even the militia, in order to avoid the feeling of war. Police officers would hide their guns in covert holsters.

There are some 1.2 million people now living in Afrin, according to the officials, including 400,000 locals. Many moved to Afrin because for all the seven years of the war in Syria, the place had been considered an island of peace and stability.

"We really hope that Russia pressures [President of Turkey] Erdogan so that the war ends soon and we could return to work and normal life. We believe in Russia, it is our only hope," Vasuk continued as he was leading us outside.

We return to Afrin after sunset. There is still heavy machinery operating around the city borders. They are building fortifications and digging trenches.

"This is just in case the Turks somehow manage to break through to the city, which I really doubt will happen," Abdul explained.

We arrive at the hospital and go to the deputy director’s office. "Marhaba" we greet him in Arabic. "You can speak Russian. Everybody here speaks Russian," a doctor says who happens to have graduated from I.M. Sechenov First Moscow State Medical University.

Since the military operation started, doctors here have been working every single day. Many have given up their homes to refugee families while they are staying at the hospital and take turns sleeping in offices during rare free hours.

Wards are filled with heavily injured. Doctors try to treat people with minor injuries on the spot or release them once they have received medical help. Four operating theaters are constantly busy. Sometimes patients line up in the hallway waiting for their surgeries. Usually bombings begin after dark so nights are the busiest time.

Some 666 People Detained in Turkey for Criticism of Afrin Op - Ministry
We drink coffee and discuss latest frontline reports. Fierce fighting continues near the town of Rajo and the villages near the border town of Bulbul. The situation is different everywhere. Somewhere the Turkish forces are attacking, then the Kurdish militia strikes back. Afrin residents pray every day for the self-defense partisans to have enough strength to hold back Turkey’s attacks and not let them close to the city.

After a meeting with Russian colleagues from VGTRK broadcaster, Abdul suggests we all stay in one room of an impromptu hostel.

"It’s a bit tight, but all right if we don’t fight. I think this is what they say in Russia," he smiles.

Around midnight, a powerful explosion shakes windows and walls. We can hear noise and children crying in the hallway. Our cameraman, correspondent and us run outside and push through the refugees to the rooftop. We can hear aircraft in the sky but cannot see any explosions. After long minutes of waiting, there are two more strikes, very close. The city center is under attack.

We go down to talk to the people. Women and children are panicking. Dozens of people are squashed together hiding under a flight of stairs.

World
Situation in Syria's Afrin Provoked by US Actions - Moscow
"Are they coming to our homes to kill us all? What will happen to us? What if a bomb hits this house and we all die?" eight-year-old Vian asked me as she grasped my sleeve.

"Nobody will die. Our guys out there in the mountains will not let anybody hurt us. Why don’t you dance with him? See, he is not afraid. He will gladly teach you to dance like Russian children," a woman told her and looked into my eyes.

We start dancing to a tune on somebody’s phone and the people’s applause. Very soon younger people join us. The music resonates down the stairs and two following airstrikes do not seem so horrible anymore. Only crumbling plaster is covering Vian’s brown hair with a light coat of dust.