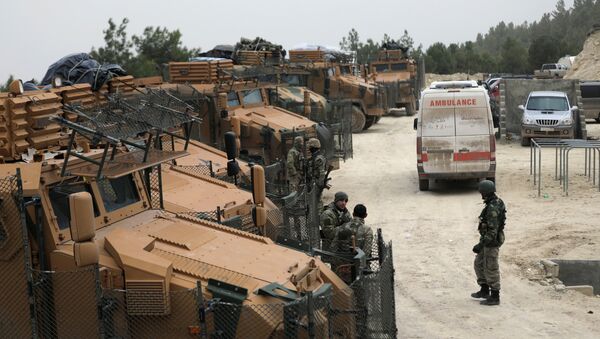 "The Turkish Air Force has hit 15 targets, including hideouts, firing points and weapons depots of PYD, YPG and IS terrorist groups during Operation Olive Branch. The aircraft participating in the operation have successfully returned to their bases. At least 74 terrorists were killed, bringing the total number [of killed militants] since the beginning of the operation to 897," the statement obtained by Sputnik read.

The Turkish General Staff commented on the development of the operation saying that the military advance was ongoing as planned.

Ankara started an offensive with the support of the Free Syrian Army forces in the Syrian Kurdish-dominated city of Afrin on January 20, aiming to protect its borders from what they call a "terrorist army," referring to Kurdish militants groups in the area. The operation dubbed Olive Branch primarily targeting the US-backed YPG, which are considered by Ankara to be affiliates of the Kurdistan Workers' Party (PKK), designated as a terrorist organization in Turkey and several other countries.

The Kurdish militants, who vowed to protect the Kurdish population from the Turkish army, continue to fight back: on February 2, six rockets from Afrin hit Turkey's southern provinces of Kilis and Hatay, injuring at least 11 people. A day before, another shelling of the center of Turkish Kilis wounded one civilian.

Commenting on the attacks in the Turkish border cities of Reyhanli and Kilis, Turkish Prime Minister Binali Yildirim stated that the Kurdish Democratic Union Party (PYD) had killed five Turkish citizens and injured over 100 more since the start of the country's military operation in Syria's Afrin district, firing 82 rockets at Turkish border districts with Syria.

Damascus, for their part, have condemned the operation, calling it an assault on Syria's sovereignty. Moscow has repeatedly urged all the parties to exercise restraint and called for respect for Syria's territorial integrity.

However, explaining the mission of the offensive, Ankara stressed that it was not aimed against the Syrian government, calling the territorial integrity of Syria its mutual goal with Damascus.