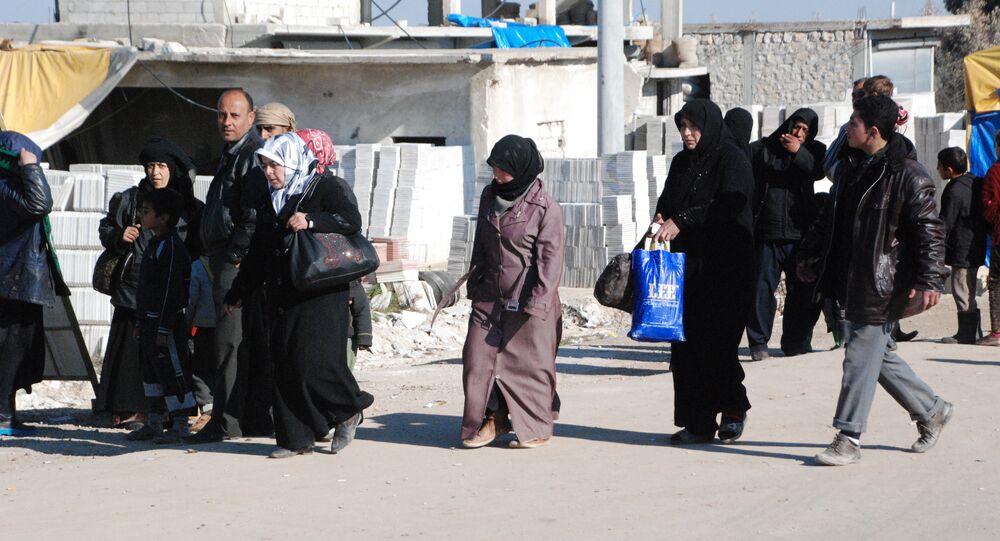 ANKARA (Sputnik) - A correspondent from Turkey's Anadolu news agency Sarp Ozer, who was covering his country's military operation in the northern Syrian district of Afrin, was injured on Friday, the agency reported.

A mortar shell exploded near Ozer, hitting him in a leg and arm. The correspondent was delivered to a state hospital in the southern province of Hatay and is reportedly in stable condition.

© REUTERS / Stringer
At Least 11 People Injured in Turkey in Rocket Attack From Afrin - Reports
Meanwhile, the Turkish forces have captured Darmik mountain in northern Syria during its military operation against Kurdish forces in Syria's Afrin district, local media reported on Friday. According to the Anadolu news agency, the Turkish troops raised their national flag on top of the mountain, which had been used by the Kurdish forces to shell the Turkish border city of Kilis.

On Friday, Turkish Foreign Minister Mevlut Cavusoglu criticized the Western countries over lack of their response to the alleged killing of Turkish civilians by shelling of the Kurdish forces from the Syrian border district of Afrin.

On January 20, the Turkish Armed Forces launched a joint operation with the Free Syrian Army opposition forces against the Kurdish forces in Afrin. The district is controlled by the US-backed the Kurdish People's Protection Units (YPG) and Democratic Union Party (PYD) militias, which Ankara considers affiliates of the Kurdistan Workers' Party (PKK), designated as a terrorist organization in Turkey and several other countries.

© REUTERS / Umit Bektas
Rocket Fire From Afrin Injures Civilian in Turkey's Kilis - Reports
According to the Turkish leadership, Ankara's ongoing Afrin operation is aimed at clearing the country's border with Syria from terrorist presence. Ankara considers the People's Protection Units (YPG), part of the Kurdish-led Syrian Democratic Forces, being linked to the Kurdistan Workers' Party (PKK), which is listed as terrorist organization in Turkey.

Turkish Prime Minister Binali Yildirim has said that the Kurdish forces have fired over 80 rockets on the Turkish border areas from northern Syria since the start of Ankara's operation.

The SDF has accused Ankara of staging attack against civilians living in the Turkish border areas and trying to frame the SDF to justify its own attacks on the SDF-held Afrin.

Turkey has repeatedly condemned the United States for providing various kinds of support, including arms deliveries, to the Syrian Kurds.

However, Damascus has also firmly condemned the operation as an assault on Syria's sovereignty. Moscow called on the parties involved for restraint and respect for the Syrian territorial integrity.

Afrin Canton Co-Chair: 'We Called on Syrian Army to Protect us'