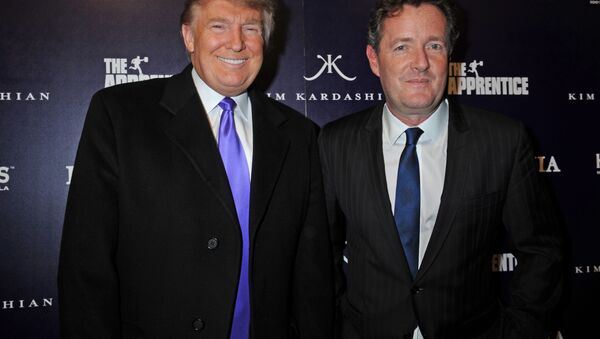 It’s a big news day: the much-discussed Nunes memo on FBI surveillance abuses was released and so was the White House’s similarly controversial Nuclear Posture Review. So why is everyone on Twitter talking about journalist Piers Morgan eating President Donald Trump’s ass?

That's it? That's The Memo? pic.twitter.com/Fx89EdzOSi

It's all thanks to BBC Two, which ran a four-minute segment where they mocked Morgan's Sunday interview with Trump as a puff piece when Morgan had the opportunity to ask hard-hitting questions. "Let's look at the staging of the interview," comedienne/host Rachel Parris joked. "Now, in a typical robust political interview… the two opponents face off with several meters between them, no furniture blocking their path, there's nowhere to hide."

"Whereas in the Trump interview, the staging hinted at a greater intimacy between the two men," she said before turning to the picture of Morgan nose-deep in Trump's sizable orange aft-end.

​Morgan was less than amused about the BBC using a photo of him sniffing the callipygian (an adjective that means "has a great butt"- use it all the time!) president's rear. "The BBC thinks this is OK to broadcast. But if it depicted high profile women, there would be outrage," he tweeted.

"If the BBC broadcast an image like this after a female journalist interviewed @theresa_may — all hell would break loose & people would be fired. Gender equality shouldn't just apply to pay — should it?" he tweeted again an hour later, once again alongside the photo.

Then he tweeted it for a third time. "So we can't have #gridgirls or #walkongirls because the imagery is 'demeaning'. But the publicly-funded BBC can broadcast this about 2 men?"

Amusing though this image may be to many people, can you imagine the BBC broadcasting it if the President was Hillary Clinton or the interviewer was a woman? #TheMashReport @BBCTwo pic.twitter.com/2mazoAzpwd

The BBC thinks this is OK to broadcast. But if it depicted high profile women, there would be outrage.
Why the double standard? pic.twitter.com/xcdxpEJD3E

If the BBC broadcast an image like this after a female journalist interviewed @theresa_may — all hell would break loose & people would be fired. Gender equality shouldn't just apply to pay — should it? pic.twitter.com/9xNqGPjZl9

So we can't have #gridgirls or #walkongirls because the imagery is 'demeaning'.
But the publicly-funded BBC can broadcast this about 2 men?
Any comment, @Ofcom? pic.twitter.com/ErOtK8Lvh6

He then retweeted other tweets of the image a bunch, too.

The Streisand Effect is where someone tries to hide something but it gets widely shared.
I want everyone to see exactly what the BBC did & share it. https://t.co/KMxC1BQXND

No, I want everyone to retweet it. That’s why I keep posting it. https://t.co/q3mlTwJ4Fo

​One would think anyone depicted worshipping Trump's generous curves would want as few people as possible to know about it, not more. But then, most people aren't famed interviewer and journalist Piers Morgan.

Morgan then got into it with director Paul Feig, responsible for an abomination even greater than the picture of Morgan eating Trump's ass: the "Ghostbusters" remake.

Well, thanks for making all my followers and me aware of this hilarious drawing that I wouldn’t have known about otherwise. https://t.co/7E7wYVt0We

No problem. Would you find it as hilarious if it depicted two high profile women? https://t.co/QmbqRgB4nO

Wow, you guys on the right really are the snowflakes that you accuse us liberals of being, aren’t you? Two powerful men get made fun of and you have to hit the “If this was women, everyone would be upset.” Yes, if it was two women, we would be. But it’s not. It’s you and Trump. https://t.co/NPqDUh23gw

​​Speaking of horrifying movies, Tom Six, director of the "Human Centipede" trilogy, has yet to comment on the photo.

Twitter, at least, had fun with the picture and Morgan's, uh, unorthodox response to it. Sputnik will leave the low-hanging "he made an ass of himself" joke to other, less distinguished outlets.

So excited to show my nephew’s 4th grade class how Twitter can be useful for reporters! And now to bring up famous journalist Piers Morgan’s Twitter feed on the overhead projec—