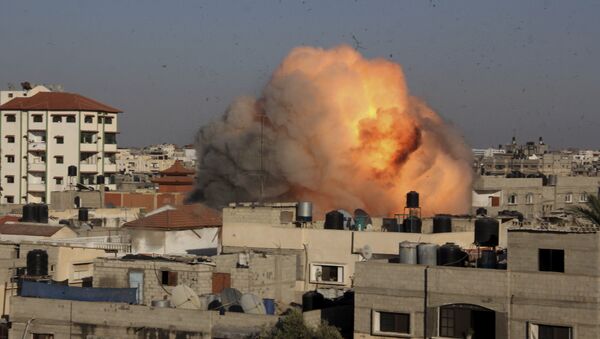 © AP Photo / Hatem Ali
Subscribe
TEL AVIV (Sputnik) - The Israeli Air Force hit a Hamas observation post in the Gaza Strip on Friday in response to a rocket shelling from the enclave against Israel, the press service of the Israel Defense Forces (IDF) said.

"Overnight, in response to the rocket fired at southern Israel, an aircraft targeted a Hamas observation post in the southern Gaza Strip. The IDF holds Hamas accountable for all violence emanating from the Gaza Strip," the IDF said on Twitter.

No information about casualties as a result of the exchange of fire has been provided.

Israeli Minister Says Egypt Might Impose Sanctions on Hamas
Rocket launches from the Gaza Strip have intensified following US President Donald Trump’s decision to recognize Jerusalem as the capital of Israel on December 6, 2017. In the wake of Washington's controversial announcement, which has been condemned by Muslim states and countries backing a two-state solution to the Israeli-Palestinian crisis, Hamas declared the beginning of the third "intifada," uprising "against the US and Zionist plans to Judaize Jerusalem." In response, the Israeli army has intensified its operations against Hamas, particularly, targeting its tunnels in the Gaza Strip. The Israeli authorities blame the Hamas movement for rocket attacks, demanding compliance with the ceasefire by all the Palestinian factions.