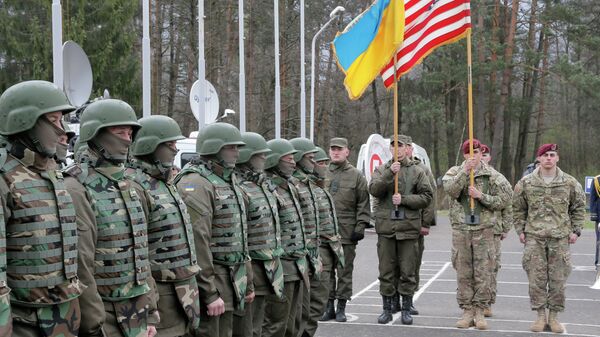 WASHINGTON (Sputnik) - The US State Department said Friday that the United States plans to give Ukraine military assistance to help protect its territorial integrity, in a move that is purely defensive and will not violate Minsk accords

"The United States has decided to provide Ukraine enhanced defensive capabilities as part of our effort to help Ukraine build its long-term defense capacity, to defend its sovereignty and territorial integrity, and to deter further aggression," spokeswoman Heather Nauert said in a statement.

Earlier this week, the US State Department has approved a licensed commercial export of particular light weapons and small arms from the US manufacturers to Ukraine.

"U.S. assistance is entirely defensive in nature, and as we have always said, Ukraine is a sovereign country and has a right to defend itself. The United States remains committed to the Minsk agreements as the way forward in eastern Ukraine," the statement read.

US State Department Confirms Licensed Commercial Export of Arms to Ukraine
Meantime, the United States has withdrawn favored trading status from Ukraine because Kiev authorities have failed to act vigorously enough to enforce intellectual property rights, the White House said in a press release on Friday.

"President of the United States Donald Trump decided to withdraw Ukraine from the General System of Trade Preferences (GSP) due to insufficient efforts from Kiev to protect intellectual property rights," the release said.

In a letter to the leaders of both chambers of Congress on Friday, Trump said the preferences would be suspended on a number of types of products imported into the United States from Ukraine.

US Defense Budget Earmarks $350Mln for Military Aid to Ukraine
Earlier this month, US President Donald Trump signed the country's defense bill, authorizing $350 million in military aid to Ukraine, half of which is conditioned on military reforms.

Lethal US Weapons in Ukraine: Kremlin Warns Against New Escalation in Donbass
Russia has objected to this, warning that arms deliveries to Ukraine would only escalate the conflict.

The move is likely to escalate the three-year crisis in the county's east. The warring parties signed a truce in February 2015 in the Belarusian capital of Minsk, brokered by Russia, Germany, France, and Ukraine. The Minsk Agreements charted a roadmap toward deescalating the fighting. Frants Klintsevich, a deputy chair of the defense and security committee at the upper house of the Russian parliament warned last month that US military aid to Ukraine could start an all-out war.