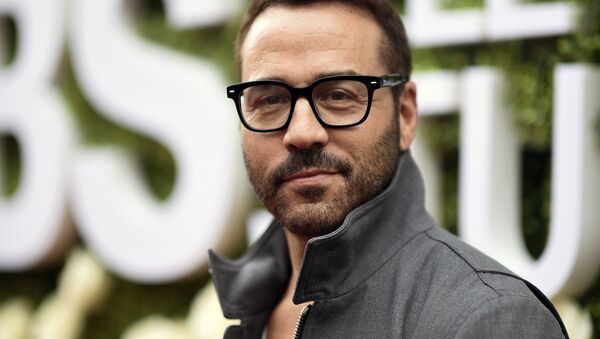 A recent investigation has revealed a darker side of Hollywood star Jeremy Piven, who is now fighting to debunk sexual assault allegations.

Jeremy Piven has become the next Hollywood star to be caught in a shocking sexual harassment row, being accused of committing sexual assault eight years ago.

Speaking to Buzzfeed, actress Anastasia Taneie, who worked as an extra on the set of "Entourage" in 2009, alleged that Piven assaulted her in a dark hallway, grabbing her, pushing her against a wall and groping her chest and genitals.

From Fatty Arbuckle to Harvey Weinstein: The Sex Scandals That Dogged Hollywood
She said that the actor only stopped when an assistant director walked past them and then told him to fire her for "coming onto him."

Explaining why she did not choose to come forward earlier, Taneie said that she "was scared at the time nobody was going to believe [her]."

"I didn't want to make a scene. I just wanted to go home."

"It was the most horrible thing I've ever experienced," she added.

According to Buzzfeed, Andy Lobo, another actor who worked on the set that day, stated that Taneie came into the common room in tears after her encounter with Piven and revealed that the Entourage star sexually assaulted her.

Piven, who rose to fame for his portrayal of agent Ari Gold in HBO's hit show "Entourage" from 2004 to 2011, has been also accused by two other women of improper sexual conduct.

The actor, however, has publicly denied the allegations.

Over the past few months, Hollywood has been rocked by numerous allegations of sexual assault that saw some of its biggest stars fall from grace.

Spacey Pulled From Upcoming Ridley Scott Movie, Faces New Accusations
Since October, Hollywood producer Harvey Weinstein has been accused by as many as 77 women of sexual assault and rape, being forced out of his own company and leaving his seat at the Academy Awards.

Subsequently, Oscar-winning actor Kevin Spacey was accused by a number of men of sexual harassment, dropping from a number of projects, including the fan favorite "House of Cards."

These were followed by the outings of celebrity comic Louis C.K. and filmmaker Brett Ratner.