State-of-Art Fortress: Chinese Army Prepared for All Eventualities in Africa 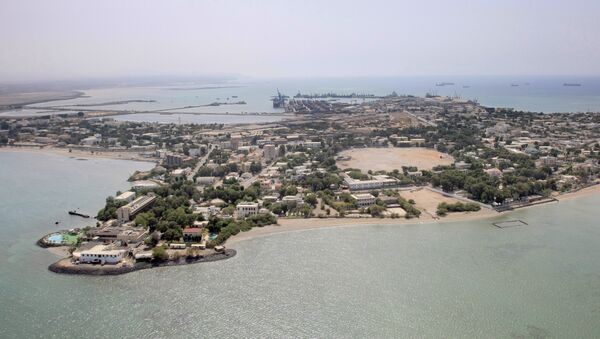 While constructing its first overseas military base in Djibouti, Beijing took into account the experience of Iraqi and Syrian military operations, creating a "fortress" with the sophisticated infrastructure capable of surviving a long siege, Russian military expert Vasily Kashin told Sputnik.

Beijing is strengthening its military in Djibouti, indicating that it is going to stay there long-term, Vasily Kashin, a military expert and senior research fellow at the Institute for Far Eastern Studies of the Russian Academy of Sciences, told Sputnik China, commenting on the People's Liberation Army (PLA) fire drills held less than two months after inaugurating its first overseas base in the region.

The expert called attention to the fact that China's new military facilities in the small African state resemble a "fortress."

"Judging from the released data, the [Chinese] object in Djibouti is built in the form of a fortress surrounded by a massive concrete wall with guard towers and fortified gates," Kashin said, "There are also two concrete barriers along the perimeter of the wall."

The expert noted that the wall was seemingly designed after a medieval castle, with a gallery inside which allows the military personnel to fire at a potential adversary.

According to Kashin, the Chinese took into account the experience of recent combat operations in Iraq and Syria, where cars and armored vehicles packed with explosives have become the main way of storming fortified positions.

"The Chinese base is prepared precisely for a scenario of total chaos in the host country when power is seized by the radicals," the military expert noted, explaining that the facilities are well-adapted for functioning under a prolonged siege.

Africa
Open For Business in Africa: China Launches First Naval Base in Djibouti
In addition to fortified walls the Chinese military facilities in Djibouti contain an expanded 400 meters long helipad. Kashin explained that the helipad is designed to receive parachute cargo containers from transport aircraft.

"Thus, the base can be supplied by air in case of blockade, when the airport located in Djibouti is unavailable," the expert clarified.

He stressed that all vital infrastructures for the base's personnel and services for Chinese ships visiting the military cluster are located within the fortified perimeter. It includes a berth capable of receiving 2-3 large surface warships (destroyers and frigates) simultaneously; storage for fuel, water and dry cargo; living quarters, a command post, hangars for military equipment, as well as places for meetings and mass events. The base also has underground facilities, Kashin remarked.

It is expected that the Chinese Special Ops equipped with the heavy helicopter Z-8F will allow Beijing to carry out special military operations — such as rescuing ships captured by pirates — within a radius of several hundred kilometers and to evacuate sick and injured military servicemen from Chinese vessels operating in the area of the Horn of Africa.

It was earlier reported that the base will be protected by a company of Chinese marines equipped with armored fighting vehicles, light weapons and anti-tank missile systems, while warships deployed near the base will provide air defense of the military infrastructure.

In fact, the Chinese project shows how to get the most out of the 36-hectares territory, rented by Beijing from the government of Djibouti, Kashin stressed.

"The design of the base provides maximum security for the object," he explained, adding that the only drawback to the Chinese military base in Africa is the absence of an airfield.

Why China's First Overseas Military Base in Djibouti is 'Only the Beginning'
For example, the US has its own airfield in Djibouti, which is used, in particular, for the deployment of military drones. At the same time the number of US personnel in the country amounts to 4,500 people.

He added, however, that China is planning to make significant investments in the construction of the second international airport in Djibouti and, if necessary, the PLA Air Forces will use the local infrastructure for its aircraft.

On Monday South China Morning Post reported about the first live fire drills conducted by the PLA at its newly opened overseas military base in the Horn of Africa last Friday.

The Chinese Defense Ministry described the Djibouti base as a naval logistics hub and bastion for support of "naval escorts in Africa and southwest Asia," United Nations peacekeeping operations and general humanitarian aid. However, according to the media outlet, the recent military exercises indicated that the PLA intend to be able to resist attacks from terrorists, pirates, local armed forces, and even foreign troops.

Djibouti is also home to the US Navy's Camp Lemonnier and the French naval base known as the Naval base of Heron.

The African country's close proximity to the Middle East and its position on the Bab el-Mandeb Strait, a gateway to the Suez Canal, makes the region especially attractive for global powers.

China inaugurated its Djibouti naval base on August 1, 2017 becoming the third foreign power having deployed its military contingent in the region.