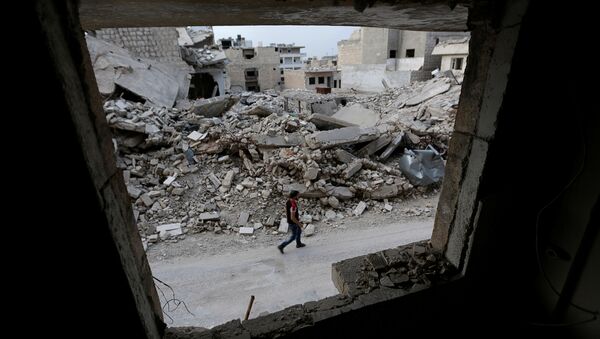 The work on the establishment of the safe zone in Syria's northwestern Idlib province will be complicated due to the possible difficulties in coordination of its parameters, Russian Foreign Minister Sergei Lavrov said Sunday.

Kremlin Positively Assesses Situation in Syria Safe Zones, Mentions Difficulties
MANILA (Sputnik) — Lavrov added that the de-escalation zone in Idlib was the "most complicated of the four zones about which Russia, Turkey and Iran had agreed in Astana in May."

"The work is currently underway on the third zone, the largest and probably the most complicated — in the Idlib province… It will not be easy to coordinate the parameters of the de-escalation zone," Lavrov told journalists on the sidelines of the ASEAN forum in Manila.

"We assume that [Iran, Russia and Turkey] as well as other players including the United States maybe have influence on all the militants, on all the armed formations, excluding of course, the terrorists, which do not fall within any agreements. If [Iran, Russia, Turkey and the US-led coalition] will simultaneously use influence on certain players, I believe the compromises contributing to the ceasefire and creating the conditions for the political process, would be found," Lavrov pointed out.

De-Escalation Zones in Idlib, 5 Regions to Solve '50%' of Crisis - Erdogan
On May 4, Russia, Turkey and Iran, the guarantor states of Syrian ceasefire, signed a memorandum on the creation of four zones of de-escalation in Syria, which include the province of Idlib and seven other regions. The four zones are expected to facilitate the delivery of humanitarian aid, help prevent future clashes and restore economic activity. The memorandum on the establishment of the four zones came in force on May 6.

The zones in southern Syria and in the Eastern Ghouta are already operating effectively while on Monday, the representatives of the Russian Defense Ministry and moderate Syrian opposition had reached an agreement on the establishment of the third de-escalation zone in the northern part of the Syrian Homs province.

On Saturday, a member of Syria's Tomorrow opposition movement told Sputnik that the efforts of Russia and Egypt will possibly make Syria's northwestern Idlib province the next stage of de-escalation in the country after the province of Homs.