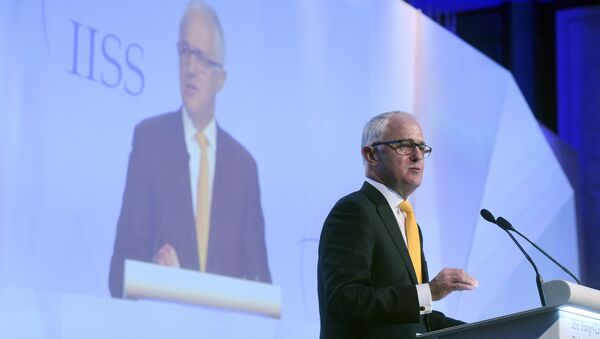 Asian allies fearful that Washington's new nationalism will leave them open and vulnerable to China, have begun to band together.

Echoing recent remarks by German Chancellor Angela Merkel, that Europe must not rely on the US, Australian Prime Minister Malcolm Turnbull remarked at a regional security conference that allies in the area "cannot rely on great powers to safeguard our interests," as Southeast Asian countries begin to discreetly discuss strengthening old alliances, as well as creating new ones.

During his opening remarks on Sunday at the Shangri-La Dialogue in Singapore, the pre-eminent annual security forum for Southeast Asia, Australian PM Turnbull stated, "We have to take responsibility for our own security and prosperity," according to Reuters.

The new turn in Asian diplomacy — away from the US — is seen to come in the wake of a growing mistrust of the administration of US President Donald Trump, particularly in light of Washington's withdrawal from the Trans-Pacific Partnership and his announcement of his intent to pull the country out of the Paris climate accords.

Government officials and expert analysts in the region fear that Trump will next pull back from the decades-long role played by the US in the region to safeguard smaller countries from being too heavily affected by Chinese military and economic influence.

Comments from US Defense Secretary Jim Mattis, however, asserted that Washington would continue to oppose moves by China in the region, especially with regard to Beijing's militarization of islands in the disputed South China Sea.

Attendees to the security forum nonetheless pointed to the unpredictable nature of Trump's policies, and noted their discomfort with the president's effusive praise for Chinese President Xi Jinping.

"I would like to know very clearly what are the true intentions of the new administration," said Malaysian Defence Minister Hishammuddin Hussein.

"We trust Mattis and we trust [US Pacific Commander Harry] Harris but at the very top? The trust gap is very wide," offered an unnamed Asian military officer, cited by Reuters, who added, "Our fear is driven by the reality that it is only the US that is powerful enough to set red lines with China."

"Countries look at the landscape and you adjust, and that's what good leadership does… you put yourself in a position so if there are changes, you are not caught completely off-guard," Ng said Sunday.

In addition to sovereign Asian nations, the signatories to the Five Powers Defence Agreement: Malaysia, Australia, the UK, Singapore and New Zealand, have recently deepened their ties to network military assets and increase counter-terrorism programs and maritime security, as reported by Reuters.

Regional security expert Tim Huxley suggested last week that US policy is now in "a period of, at best, uncertainty under President Donald Trump."

"Amid this uncertainty," Huxley added, "most states in the region are seeking to increase their military capabilities."