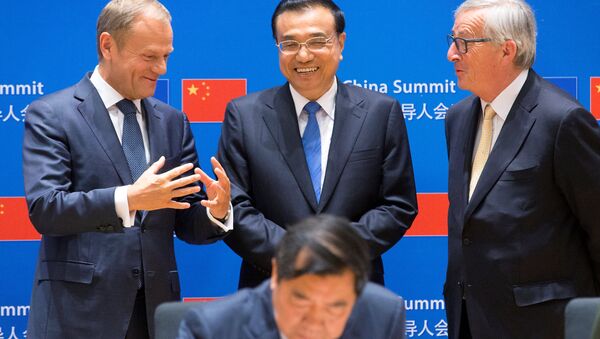 He made the remarks while attending the 19th China-EU leaders' meeting with European Council President Donald Tusk and European Commission President Jean-Claude Juncker.

China highly values its relations with Europe and supports the EU countries to choose their own path of integration, said Li, adding that he hopes the meeting could send a positive signal that their relationship remains stable and is steadily improving, and that they could respond to the growing global uncertainties with stability of their cooperation.

On economic front, Li noted that China and the EU have kept making new progress in their cooperation in recent years, urging the two sides to better align their development strategies, expand two-way opening up and push forward their negotiation on an investment agreement.

He encouraged the two sides to boost cooperation in such fields as infrastructure, aviation, information and network security, finance and renewable energy, among others.

The two sides also should take the opportunity of the "2018 EU-China Tourism Year" to further facilitate people-to-people exchanges, he added.

China, he said, is willing to work with the EU to promote the upcoming summit of the Group of 20 (G20), scheduled for July in Hamburg, Germany, so that it could make new contribution to spurring global economic growth and cooperation, and to improving global economic governance.

China will also strengthen cooperation with the EU on climate change and jointly work to implement the Paris climate deal, and the goals of the UN 2030 Agenda for Sustainable Development, said the premier.

Also at the meeting, Tusk and Juncker said preserving the current international system accords with the common interests of the EU and China, and those of the whole world, adding that global trading system should not be maintained in a selective approach.

The EU and China have enjoyed good cooperation on major international issues such as climate change and Iranian nuclear issue, said the EU leaders, adding that a stronger cooperation by the two sides in free trade, climate change, security, among others could contribute to world peace, stability and prosperity.

The EU attaches great importance to promoting its trade ties with China and supports the China-proposed Belt and Road Initiative, they said, adding that the bloc is willing to further deepen cooperation with China on inter-connectivity and expand two-way investment.

After the meeting, the Chinese premier and the EU leaders witnessed the signing of a number of cooperation agreements covering investment, intellectual property rights and technology.

At a press conference following the meeting, Li urged the EU to fulfill its obligations under Article 15 of the protocol on China's accession to the WTO and thus send a signal that international rules should be respected.

Flanked by Tusk and Juncker, Li said the Chinese side has noted that the EU is revising relevant laws.

China, Li stressed, hopes that the revised regime will be in line with WTO rules and non-discriminatory.

According to Article 15, WTO members should have stopped using the surrogate country approach to conduct anti-dumping investigations on China by Dec. 11, 2016.

Tusk and Juncker said at the press conference that the EU and China had serious discussions over Article 15 and other issues of common concern during the leaders' meeting, during which they have expanded consensus and narrowed differences.

Earlier at the meeting, Li said Article 15 is a "sunset clause" and all sides should honor the protocol on China's accession to the WTO.

As regards China-EU trade frictions, the premier believes that the two sides can manage them through bilateral and multilateral channels.

Li has just wrapped up his two-day visit to Belgium, where he attended the EU-China Business Summit, co-chaired the China-EU leaders' meeting, held talks with Belgian Prime Minister Charles Michel and met with Belgium's King Philippe.

Belgium was the second and last leg of Li's Europe trip, which also took him to Germany.