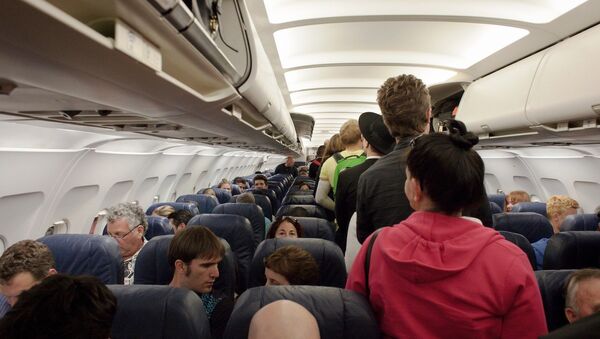 CC0 / Pixabay /
Subscribe
International
India
Africa
Delta Airlines has been forced to apologize after kicking a family off an overbooked plane in a row over a child's seat. At a Senate hearing Thursday, May 4, the airlines were threatened with a "Passenger Bill of Rights."

Senators from both parties say airlines must improve the way they treat their passengers. At a Senate hearing May 4, they also revived talk of a "Passenger Bill of Rights."

The hearing followed the United incident and a separate case where a mother with a stroller were bullied by an American Airlines flight attendant.

It's time for congress to get involved. We need a new passenger bill of rights.

But it coincided with a fresh PR blunder, this time from Delta, who were embroiled in an embarrassing episode involving a two-year-old boy and his parents being thrown off an overbooked flight.

"It's certainly impossible to ignore the public outcry," said Senator Roy Blunt, a Republican from Montana.

Democrat Senator Bill Nelson, from Florida, said air travelers often told him they "feel like they're being treated as self-loading cargo rather than as valued consumers."

"I take no pleasure in beating up the airlines, but in this case, it's warranted. The fact is we wouldn't be sitting here today if the traveling public believed the airlines cared more about them than their own bottom lines," he said.

@SteveForbesCEO Brian and Brittany Schear of Huntington Beach were thrown off a Delta Flight under threat of jail because #DELTA corp greed.

@thetoddwhaines Not so friendly skies Kids are better protected if they use a child safety seat on planes. FAA recommends that kids sit in childsafetyseats

Senator Nelson pointed out American Airlines had just announced it was slashing legroom in its new Boeing 737 jets to squeeze in 10 more passengers on each plane.

Brian and Brittany Schear were traveling home from a holiday in Hawaii when they were ambushed by flight crew who threatened them with "federal charges" after they declined to get off the plane.

The couple had just boarded a Delta flight from Maui to Los Angeles when a flight attendant told them their two-year-old son was not allowed to sit in a seat on his own. Another passenger filmed the entire incident and uploaded it onto YouTube, where it has already racked up more than two million views.

In the video clip Schear is threatened with arrest and possible jail time if he does not leave the plane.

"This is a federal offense and then you and your wife will be in jail and your kids will be in foster care," a female employee said to the couple.

Schear originally bought three seats on the flight — one for himself and his wife and one for their 18-year-old son, Mason. But in the end Mason ending up flying back to California earlier.

I would like #Delta to explain how holding a baby is safer than having it in a car seat pic.twitter.com/FtUT8WYIrc

So the couple decided that rather than having their youngest son on their lap they would strap him into the seat in his car seat.

In the video Schear tells the flight attendants: "I paid for the seat. This is ridiculous."

Delta said Friday, May 5, it was "sorry for the unfortunate experience" — which happened on April 23 — and offered to compensate the family.

Last month Dr David Dao was injured when he was roughly manhandled off a United Airlines flight from Chicago to Louisville, Kentucky.

This is What 'Mortal Kombat' United-Airlines-Style Could Look Like
Dr. Dao was paid an undisclosed sum last month after United settled his lawsuit.

United also revealed they were raising the maximum incentive for a passenger to give up their seat when a flight is overbooked to US$10,000.

But it will take a while for them to recover to the damage to their reputation, which was caused not just by the incident but by their CEO's ham-fisted response.

Oscar Munoz said only: "I apologize for having to re-accommodate these customers" and later emailed his own staff to tell them what a wonder job they were doing.

It was only after days of terrible publicity that Mr. Munoz offered a full apology to Dr. Dao.

President Trump described that incident as "horrible" but has otherwise played down the overbooking crisis, saying it could be solved by airlines offering more money to passengers to give up their seats.