Russia Builds Where US Destroyed 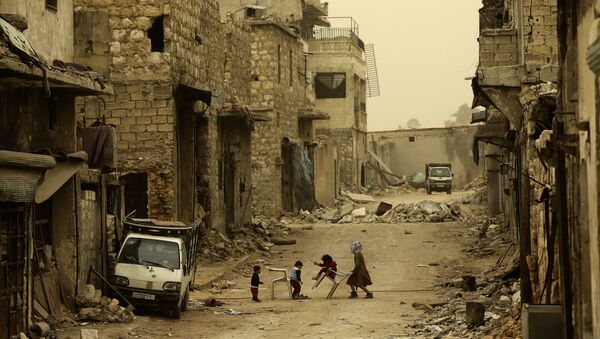 Finian Cunningham
All materials
Referring to ongoing peace talks on Syria co-sponsored by Russia, President Vladimir Putin said the negotiations marked the beginning of “rebuilding” this war-torn country, as well as other conflict zones in the Middle East region.

Already several rounds of talks have been held in Kazakhstan’s capital Astana between the Syrian government and opponents, under the auspices of Russia and Turkey.

"It is the first time that the conflicting parties have come to the negotiating table," said Putin, adding that there are "cautious grounds for optimism of achieving a full-fledged political settlement."

President Bashar Assad Hopes Syrian War Will End in 2017
It is notable that progress towards a peaceful resolution of the six-year war in Syria has been made in the absence of the United States and its European allies, Britain and France.

And, as Putin alluded to, the process of rebuilding Syria applies to the wider Middle East region, which has been ravaged by war, terrorism and sectarian bloodletting particularly over the past two decades.

It is Russia, under Putin’s leadership, which can take credit for this constructive path out of war. Whereas it is the US and its allies who are responsible for laying the region to waste and devastation from their criminal wars and regime-change plots.

American political commentator Randy Martin, who writes at worldburning.com, says a fundamental difference is because Russia is a defensive military power, while the US and its NATO partners are aggressors.

How Syria’s Economy Lost Billions of Dollars During War But Stays Afloat
He says: “From a physical geographic point of view, Russia is a neighbor to the Middle East region. But when you think about it, what reasonable purpose has the United States got to be meddling in the region? The US is, and always has been, only involved in the Middle East to exploit its vast oil resources. That goes too for the European former colonial states, Britain and France.”

The commentator added: “The only way that the US can sustain its presence in the Middle East is by exerting military force on others. In other words, to act as an aggressor, albeit under the cynical guise of being a protector.”

This contrasts with Russia’s policy, says Martin. “Russia has a genuine and mutual stake in peaceful development for the region. It uses its military power to stamp out conflict spreading so that the region can stabilize in coexistence.”

Syria is a classic example of this contrasting conduct between Russia and the US. Washington exploited Syria for a regime-change scheme, inciting war and sponsoring proxy militant groups to overthrow the government of President Bashar al Assad. That war, which ignited in March 2011 due to foreign interference, spread its flames to neighboring countries – until Russia intervened militarily at the end of 2015.

Moscow's Syria Campaign 'Breaks Chain of Color Revolutions' in Mid-East, Africa
Russia’s intervention in Syria has largely stabilized the country and dampened the conflict. A ceasefire brokered in December by Russia is largely holding and peaceful normality has begun to return for civilians in the former battleground city of Aleppo and other towns.

The peace talks underway in Astana and later in Geneva are hopeful harbingers for a lasting settlement.

Russia’s intervention in Syria, which was legal, having been approved by the Syrian government, was a principled exertion of military power to end a conflict and restore peace.

This is in stark contrast to the United States’ record in the Middle East. “Everywhere that the US has been involved in is marked by war, devastation and failure,” says Randy Martin.

“Afghanistan, Iraq, Libya, Syria, Yemen and so on. This is because the United States and its European NATO allies have no moral reason to be in those countries,” notes the political commentator. “They are only there out of selfish, exploitative calculation, and so must forcibly impose their presence through military power, either overtly or covertly.”

Obama’s 'Red Line' on Syria Was a 'Colossal Mistake' - Former Security Adviser
It is no coincidence, says Martin, that the US-led wars and covert conflicts in the Middle East began soon after the collapse of the Soviet Union.

Recall that in 2007, former US General Wesley Clark made the notorious disclosure that the Pentagon had plans dating from at least 2001 to roll over seven Middle East countries. In addition to Afghanistan, these target countries included: Iraq, Syria, Libya, Lebanon, Somalia, Sudan and Iran.

Washington’s imperialist roadmap for the region, aided and abetted by European surrogates, was motivated not only by designs on plundering resources. It was also motivated by a calculation to deprive Russia of ever recovering any influence in the strategically important region.

“Full spectrum dominance has been a guiding strategic plan for the US government since the dissolution of the Soviet Union,” says Martin. “It mandates the US to ensure that Russia should never regain its power to thwart American interests.”

This drive by the US to destroy large swathes of the Middle East seems indeed to have been partly about ensuring that countries would be turned into failed states and American vassals. It is significant that most of the targeted countries were historically allied to Russia.

Putin: 'Russia Will Not Support Any Sanctions Against Syria'
However, these best-laid American plans appear now to have come unstuck. That is because Russia has gained a newfound sense of confidence in its global role, as well as a fearsome array of new military power, under Putin’s leadership.

Russia has used its military prowess in a principled and responsible way to end conflict in the region. Syria was the line in the sand. It’s as if Putin said to the Americans and their European surrogates: enough is enough of your nefarious schemes.

Even those Middle Eastern states normally thought of as American clients, such as Turkey, Israel and Saudi Arabia, have shown a respectful deference to Russia. These countries may not have liked the way Russia hampered their regime-change intrigues in Syria. But nevertheless, they seem to recognize and respect Russia’s principled defense of its ally. Also, the halt to conflict in Syria that Russia brought about is in the long-term interests of the whole region.

Last week, the Turkish and Israeli leaders made separate visits to Moscow in a show of respect to Putin, despite their political differences and opposition to Russia’s alliance with Syria and Iran.

Russia has evidently emerged as the main player in the Middle East because of its political integrity. Moscow wants to create a region that is multilateral, mutual and peaceful. This is the complete opposite of how Washington and the Europeans operate.

Assad Says Wrong European Policies Towards Syria Led to Spread of Terrorism
Perversely, but tellingly, Washington is trying to portray Russia as the aggressor, when in fact it is the Americans who fit that pernicious bill. The Americans and their European sidekicks have nearly destroyed an entire region, with flames of terrorism and sectarianism. But it is Russia that has managed to quell the violence and is now set to rebuild the region.

All across the war-riven region, countries from as far apart as Libya to Afghanistan, from allies and foes alike, such as Israel and Iran, all recognize that Russia is the only power that is showing true leadership. Russia is genuinely trying to bring the entire region out of conflict based on the principles of sovereignty and respect.

Russia is building and restoring where the United States and its European lackeys have destroyed. The widespread kudos Russia is gaining in the region is the measure of its successful leadership.