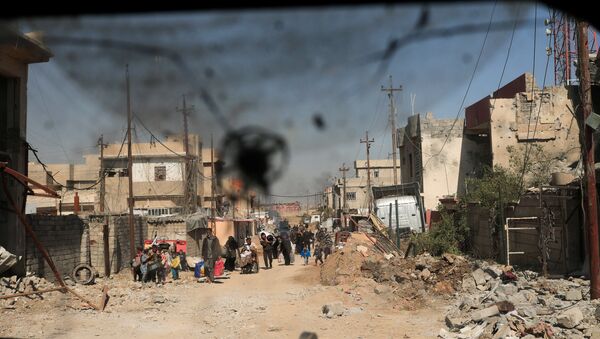 Of late, feminist Sweden has been trying to re-establish its image as a citadel of equality, following the damage done by the wave of sexual assaults that made international headlines. In this connection, a series of tweets by a renowned war reporter have hardly made things better for Sweden.

Magda Gad, a celebrated Swedish war correspondent made her fellow Swedes' blood boil by sensationally claiming in a series of tweets that Iraq's war-torn Mosul was a safer place than Sweden, shattering PR-efforts by Sweden's 'feminist' government.

​"There is no law on the Islamic veil here, and it's safer for women to be outdoors than Stockholm," Magda Gad tweeted from Iraq.

In another post from the battle-scarred country, Gad shockingly claimed a weekend night spent in Stockholm's Civic Square to be much messier.

​"Apart from the war, it is peaceful. In cities unaffected by the war, no one bothers you when you walk the streets, it's very quiet," Gad wrote in another tweet, possibly alluding to the rise of crime in Swedish urban areas.

See Not, Speak Not: Sweden Continues to Hide Immigrant Crime Statistics
Magda Gad has been reporting on the war against Daesh (ISIL/ISIS) in Iraq for the Swedish tabloid newspaper Expressen since June 2016. On Facebook, she shared her pessimism about Iraq's future and wondered if peace will ever be reached in the Middle Eastern country, plagued by infighting, terrorism and sectarian violence.

Fourty-one-year-old Magda Gad is a Swedish war correspondent who has collaborated with Expressen, Aftonbladet and Svenska Dagbladet. In her coverage, which mostly focuses on wars and disasters, she aims to "highlight what has been left darkened" and "lend a voice to people who do not have one." Gad is also co-founder of the Blank Spot Project, which is a news page focused on longform reports from places with little to no journalistic coverage.

No Means No: Sweden Slams Arab Police Chief in Twitter Row Over Female Sexuality
Iraq's second-largest city Mosul was captured by Daesh in June 2014 to become an Islamist stronghold. The joint offensive by Iraqi government troops with allied militias, Iraqi Kurds and international forces, dubbed Operation "We Are Coming, Nineveh," has been underway since October 2016, following less successful Mosul offensives in 2015 and 2016. Daesh forces are outnumbered 1 to 10 and are facing a bitter defeat. According to an estimate by the International Organization for Migration (IOM), more than 400,000 people have been displaced in the siege of Mosul.

Last month, a picture of Sweden as the "rape capital" of Europe was conjured up by US President Donald Trump and former UKIP leader and founding member Nigel Farage, who both claimed that uncontrolled migration has led to a dramatic surge in sexual crimes. Evidence to back this startling claim, which gainsays Sweden's feminist image, rests upon comparative international statistics that suggest that Sweden has 63.5 reported rape incidents per 100,000 citizens, twice as much as in Belgium, which is the closest European country based on those numbers. Swedish authorities, on the other hand, have been at pains to disprove the image as a "rapist's paradise." The most popular arguments include a broader definition of rape and an alleged lack of social stigma in reporting rape.