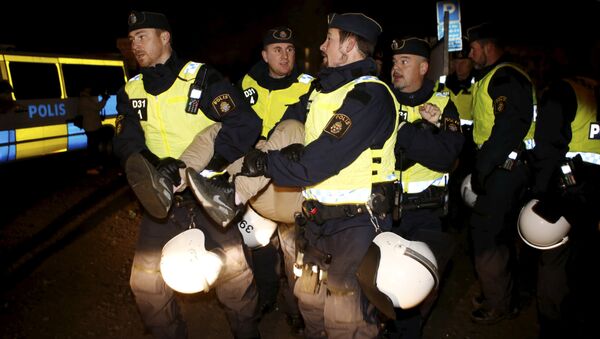 Almost everything in life is constantly weighed, counted, measured and recorded. Nothing escapes the state's keen interest, and Sweden is no exception. Nothing except immigrant crime, which is rather strange, considering Swedes' propensity for transparency.

More Swedish Women Haunted by Fears of Rape
For over a decade, Sweden has not published regular statistics on criminals' origin. A recent study showed that Swedish women were experiencing greater insecurity and were deliberately staying at home to avoid sexual harassment led many immigration-skeptical Swedes to the conclusion that the recent wave of immigration was to blame. However, there are no fresh figures on the percentage of crimes committed by the foreign-born to rely upon, as the last investigation of this kind was carried out by the National Crime Prevention Council (BRÅ) in 2005.

Right-wing populist Sweden Democrats thus have demanded a new investigation on this matter in parliament, however, they only received the additional support of Center Party MP Staffan Danielsson, who turned out to be a dissenter in his own party. According to Danielsson, it would be counter-productive not to release such a report, because Sweden has since experienced mass migration which may have changed the situation.

"People believe that Swedes almost don't commit any crimes at all, only the foreign-born do. Apparently, this is not true. Facts are needed. This is the only thing I'm after," Staffan Danielsson told Swedish national broadcaster SVT.

"There is no rational reason for refusing to update the data on immigrants' overrepresentation in crime. A researchers' mission is to enlighten, not to obscure. Besides, BRÅ will not be able to hide their statistics for eternity, which has already damaged the authority's long-term credibility. No straight shooter would willingly darken the statistics," Sanandaji said, as quoted by Swedish news outlet Nyheter Idag.

However, a clear parliamentary majority said no to the perspective of tasking BRÅ with updating its crime statistics according to the criminals' country of origin, SVT's survey revealed.

Last February, Justice Minister Morgan Johansson already declined a similar idea. According to him, a report on perpetrator's origin would not "amplify the potential to improve Swedish society." Today, Johansson stuck to his guns once again. According to him, there is no need for a new study, because it allegedly would not shed any new light on the problem.

"Numerous studies have been carried out in Sweden and in the world, and all show pretty much the same thing: that minority groups are often overrepresented in crime statistics," Johansson conceded to SVT, yet explained the lopsided statistics with strictly socioeconomic factors.

Sweden's Feminist Gov't Funnels Millions Into 'Yet Another' Equality Authority
Johansson's view was backed by senior criminologist Jerzy Sarnecki, who argued that Sweden, instead of carrying out yet another potentially pointless study, should investigate the reasons for such an imbalance instead.

Remarkably, the very debate about the necessity of fresh statistics on migrant crime sparked an outrage on Swedish social media. Aftonbladet's columnist Ehsan Fadakar went on to call SVT "useful idiots" for merely providing an arena for the infected debate.