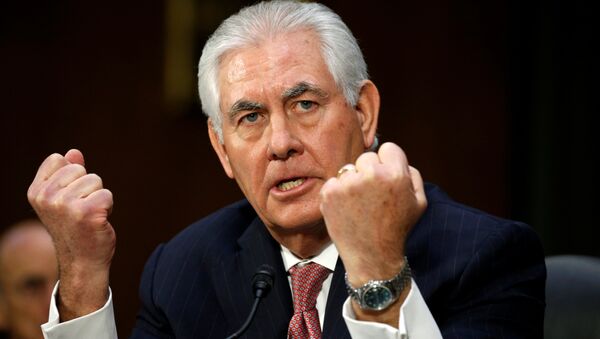 During his confirmation hearings before the Senate Foreign Relations Committee on Wednesday, Donald Trump’s nominee for US Secretary of State, Rex Tillerson, called Russia a danger and advised that sanctions against Moscow should be kept in place. Radio Sputnik discussed this with David Schultz, Political Science Professor at Hamline University.

“When he was running for President, Donald Trump made lots of statements and promises not just about Russia, but also about NATO, China, Mexico, and now his appointee [For Secretary of State] is sending mixed signals that are not just upsetting Russian listeners but are also leaving many Americans confused about who Donald Trump really is,” David Schultz said.

Tillerson's Tactic: What One Should Expect From the New US Secretary of State
He added that previously Trump used to make some significant overtures to Russia in terms of resetting bilateral relations, but Tillerson’s statements made during his confirmation hearings seem to suggest a continuation of the Obama administration’s foreign policy regarding the Russian Federation.

Rex Tillerson said on Wednesday that he would keep US sanctions against Russia in place and that he was considering new penalties related to alleged Russian meddling in the US presidential elections.

“I believe there could be additional freezes on Russian assets in the United States, more embargoes in terms of US technology transfers and cooperation on some other issues, including bilateral trade issues,” Shultz noted.

He added, however, that it could just be “a position set before the Senate to make them happy and win confirmation.”

At the same time, Rex Tillerson criticized President Obama’s sanctions on Moscow that cost ExxonMobil hundreds of millions of dollars in lost profit.

When asked how this corresponds with his calls for new restrictions, Schultz said that every new US administration tried not to deviate too much from the previous administration’s policy.

Anti-Russian 'Mantras' Voiced by Tillerson 'Unlikely to Become His Policy'
During the hearings Rex Tillerson also mentioned some areas where the US and Russia could cooperate. When asked to comment on this, David Schultz said that both countries have shared concerns about addressing the terrorist threat.

“For many years the two countries have enjoyed mutual economic benefits of working together and have also enjoyed significant cultural exchanges. I think there is a basis for cooperation on a variety of areas, that the US and Russia have shared global interests and that the existing differences between us should not become an impediment to cooperation.”

When asked what US-Russia relations will look like when and if Tillerson becomes US Secretary of State, David Shultz said that, judging from what he said during the confirmation hearings, he did not expect any significant changes in Washington’s relations with Moscow.

“But I still see a potential for the two countries to sit down at the bargaining table to try to figure out how to work out their differences,” David Schultz said.

Rex Tillerson’s statements came as somewhat of a surprise to many. Not only has Donald Trump indicated during his campaign he looks forward to improving ties with Russia, he has even been criticized for nominating Rex Tillerson as an overly Russia-friendly man.

Moreover, in the middle of July Trump said that he would consider recognizing Crimea’s reunification with Russia and even lifting sanctions earlier imposed on Moscow.