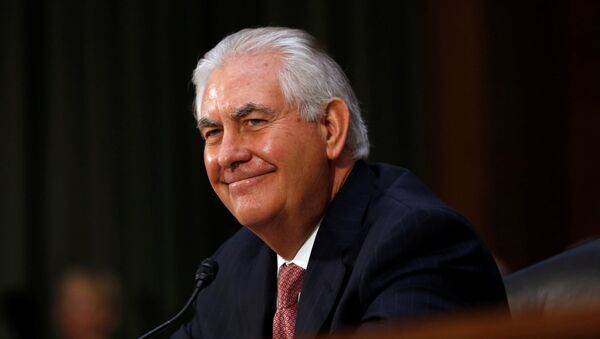 Rex W. Tillerson's statements in support of the US' anti-Russian sanctions made during the Wednesday confirmation hearing resemble nothing so much as usual US establishment's mantras, Professor Alexander Mikhailenko told Radio Sputnik. Mikhailenko dubbed sanctions an "outdated tool" and assumed that Tillerson will pursue a more realistic policy.

Tillerson Says US, Russia Have ‘Scope for Discussion’ Over Fighting Daesh
The Senate Foreign Relations Committee confirmation hearing was no walk in the park for Rex W. Tillerson, nominated by US President-elect Donald Trump for Secretary of State.

The US mainstream media calls attention to the fact that the nominee faced fierce resistance from Rubio.

"Rubio's vote could make the difference in Tillerson's progress, as Republicans have only a one-vote margin on the Senate Foreign Affairs Committee and Democrats may not support him," Nicole Gaouette of CNN reported Thursday.

Meanwhile, in the course of the hearing Tillerson stressed that he supported anti-Russian sanctions including the controversial Magnitsky Act, the US' tough position in regard to Crimea's reunification with Russia, and agreed that the alleged "targeted bombing" in Aleppo by Russia and Syria "violated the international order."

"While Russia seeks respect and relevance on the global stage, its recent activities have disregarded American interests," Tillerson told the Committee on Wednesday.

Tillerson: US to Recognize Crimea Annexation if Accords Struck With Ukrainians
According to Alexander Mikhailenko, professor of the Department for Russia's Foreign Policy of the Russian Presidential Academy of National Economy, Tillerson's rhetoric largely complied with the US establishment's stance toward Russia.

"It is necessary to understand the essence of the event," Mikhailenko told Radio Sputnik, "Tillerson had to go through these hearings to assume the position of Secretary of State."

"So, I think that in this situation any politician would have refrained from saying contradictory things. He said what they wanted to hear from him — usual mantras of the current US [foreign] policy… But I do not think that this will be his policy," the expert emphasized, expressing hope that Tillerson's strategy would be more realistic.

Tillerson: US Diplomacy Ineffective if Not Backed by Threat of Force
Mikhailenko highlighted that during his speech Tillerson pointed out that Russia has its own ambitions and that cooperation between Moscow and Washington should be founded on mutual interests.

"[W]e need an open and frank dialogue with Russia regarding its ambitions, so that we know how to chart our own course… Where cooperation with Russia based on common interests is possible, such as reducing the global threat of terrorism, we ought to explore these options," Tillerson underscored.

"There are common threats that Russia faces because of terrorist organizations… I think there is a scope for discussion… We would have to see what Russia's posture is," he stressed.

It is important whether or not Tillerson's words will be heard by the US establishment, the Russian academic noted.

"The Republicans say that they will protect the US' national interests. But will they respect [national] interests of other [countries], including Russia? That's the question," Mikhailenko pointed out.

Commenting on the existing consensus regarding anti-Russian sanctions among US policy-makers, the Russian academic dubbed the measure an "outdated tool."

"I think that both the outgoing and the next US administration clearly understand that anti-Russian sanctions are creating a deep rift between the United States and Europe. [These sanctions] are hitting Europe and the Americans are benefitting from this. Sanctions are an outdated tool. It's time to talk about cooperation," Mikhailenko concluded.