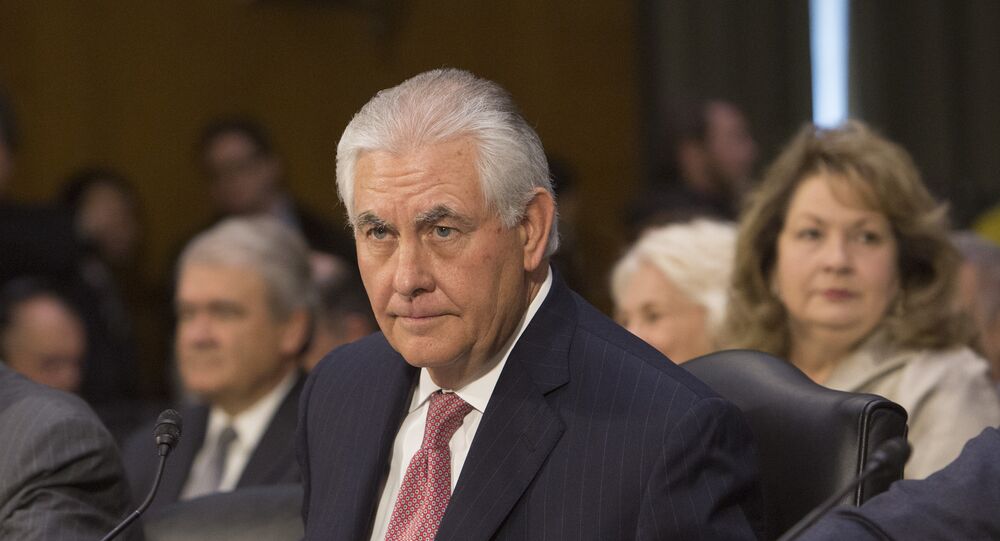 US Secretary of State nominee Rex Tillerson said Moscow was seeking respect on the global stage but its recent actions disregarded Washington's interests.

WASHINGTON (Sputnik) — Russia seeks respect on the world stage, but its recent actions have disregarded US interests globally, Secretary of State nominee Rex Tillerson testified before the US Senate Foreign Relations Committee on Wednesday.

"While Russia seeks respect and relevance on the global stage, its recent activities have disregarded American interests," Tillerson stated.

The United States needs to have an honest discussion with Russia about its goals in order to develop a relationship, he said.

"[W]e need an open and frank dialogue with Russia regarding its ambitions, so that we know how to chart our own course," Tillerson stated.

Russia should be considered a danger to the United States, but its actions are not completely unpredictable when it promotes its interests, Tillerson said.

"Russia today poses a danger, but it is not unpredictable in advancing its own interests," Tillerson stated.

Tillerson said that he supports the Magnitsky Act which sanctions individuals over alleged human rights violations in Russia.

"Yes, I do," Tillerson stated when asked whether he supports the law. "I will ensure that, if confirmed, myself and the State Department will comply with that law."

The United States should look to cooperate with Russia on issues of common interest such as on combating terrorism, Tillerson said.

"Where cooperation with Russia based on common interests is possible, such as reducing the global threat of terrorism, we ought to explore these options," he stated.

It is fair to assume that Russian leadership knew and authorized the alleged breach of Democratic National Committee (DNC) computer systems during the 2016 US election, Tillerson said.

"I think that's a fair assumption," Tillerson stated when asked if he believed Russian leadership would need to authorize such an operation.

"I would not use that term," Tillerson stated when asked by US Senator Marco Rubio whether Putin was "a war criminal."

The United States and Russia are unlikely to become friends, but the relationship between the two countries can be improved and Moscow can be made a US partner at times, Tillerson said.

"We are not likely to ever be friends. We do not hold the same values," Tillerson stated. "There is scope to define a different relationship that can bring down the temperature around the conflicts we have today."

Tillerson added that "dialogue is critical, noting that the United States needs to "move Russia from adversaries always to a partner at times."

The United States should maintain the current state of sanctions against Russia until President-elect Donald Trump’s administration develops its diplomatic approach toward Moscow, he said.

"It’s important that we keep the status quo until we are able to develop what our approach is going to be," Tillerson stated. "It will be all part of the approach — that is part of the incentives, on the one hand, or part of the greater pressure on the other — that will be an important element of developing that first conversation with Russia."

Tillerson to Be 'Informed, Independent Advisor' to Trump

Kerry Expects to Meet With Trump's Pick Tillerson in Near Future