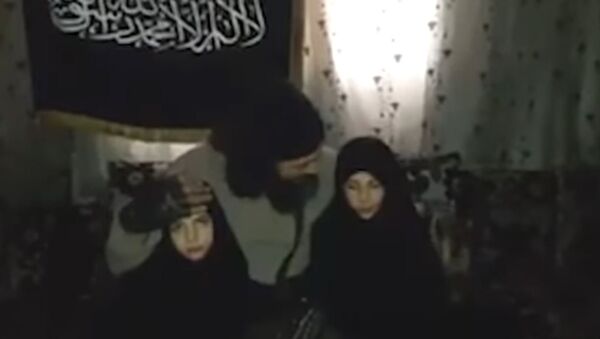 © YouTube/Kum Kum
Subscribe
Recently-surfaced footage shows al-Nusra and al-Qaeda operative Abu Nimr persuading two young children to become so-called martyrs, one of which may have been involved in the recent suicide bombing of a Damascus police station.

"You want to surrender so that you’re raped and killed by the infidels? You want to kill them, no? We're a glorious religion, not a religion of humiliation, isn't that so darling?" Nimr urged.

Al-Nusra, recently rebranded as Jabhat Fatah al-Sham, constituted part of the rebel opposition that fell to the Syrian government in the liberation of Aleppo. While it is not known where the video was filmed, a reference to green busses points to Aleppo, where the infamous vehicles have shuttled civilians and rebels to the Idlib province.

The children, Fatimah and Islam, look terrified. The heart-wrenching video shows a macabre and sinister side of the rebel forces. Mainstream media outlets have covered the rebels in an ambiguous way, to the point of being “completely decontextualized” from the real picture of Syrian rebel groups, according to a US journalist who spoke with Sputnik Radio program By Any Means Necessary upon returning from the war-torn country.

Last week, an eight-year-old child entered a police station in al-Midan, Damascus, claiming that she was lost, before terrorists set off explosives attached to the child’s body using a remote-controlled device. The only death resulting from the detonation was the girl. Many consider one of the children in the video to be the girl who died in this tragedy.

000000
Popular comments
These savages need to be exterminated.
Tim - USA
22 December 2016, 02:12 GMT1
000000
Time to END their reign of terror. Russia needs NO ONE and stop whining all day about west help , blah , blah Just prep few columns with T90's on front. They get IN and get this BARBARISM Practitioner's a trip to the UNDERGROUND. Russia could begin a joint effort with EEU CIS anti terror. Using CSTO . Then ADD ASEAN, SCO, BRICS and some others. Don't forget MERCOSUR, Cuba and many others that will join. ONCE there, clean Syria.. FAST. Or prep columns and go clean and retake Syria. Firstly, no RADICALS can be with mercenaries. This is so DANGEROUS, because Russia is dealing, BUT cannot ID RADICALS sneaking, that will take DAMASCUS and KILL opposition as they done too. The BEST is to DEMAND civilian FREE movement. Those opposing, are terrorists holding civilians HOSTAGE. So do an ALEPPO operation. BUT all taken cities MUSTY be evacuated 100% and barricaded. The effort will work IF Russia SHUT IT and work.
cast235
22 December 2016, 02:22 GMT
000000
Newsfeed
0
New firstOld first
loader
LIVE
Заголовок открываемого материала
Access to the chat has been blocked for violating the rules . You will be able to participate again through:∞. If you do not agree with the blocking, please use the feedback form
The discussion is closed. You can participate in the discussion within 24 hours after the publication of the article.
To participate in the discussion
log in or register
loader
Chats
Заголовок открываемого материала
Worldwide
InternationalEnglishEnglishMundoEspañolSpanish
Europe
DeutschlandDeutschGermanFranceFrançaisFrenchΕλλάδαΕλληνικάGreekItaliaItalianoItalianČeská republikaČeštinaCzechPolskaPolskiPolishСрбиjаСрпскиSerbianLatvijaLatviešuLatvianLietuvaLietuviųLithuanianMoldovaMoldoveneascăMoldavianБеларусьБеларускiBelarusian
Transcaucasia
ԱրմենիաՀայերենArmenianАҧсныАҧсышәалаAbkhazХуссар ИрыстонИронауОssetianსაქართველოქართულიGeorgianAzərbaycanАzərbaycancaAzerbaijani
Middle East
Sputnik عربيArabicArabicTürkiyeTürkçeTurkishSputnik ایرانPersianPersianSputnik افغانستانDariDari
Central Asia
ҚазақстанҚазақ тіліKazakhКыргызстанКыргызчаKyrgyzOʻzbekistonЎзбекчаUzbekТоҷикистонТоҷикӣTajik
East & Southeast Asia
Việt NamTiếng ViệtVietnamese日本日本語Japanese中国中文Chinese
South America
BrasilPortuguêsPortuguese
NewsfeedBreaking
08:18 GMTAs Iran Nuclear Talks Resume, Will Israel Ever Exercise Military Option?
08:04 GMTOmicron Variant: Panic Grips Indian Officials as Passenger From South Africa Tests COVID-Positive
08:01 GMT'Omnibus of Omnishambles': Boris Johnson Facing SNP Motion of Censure in Parliament
07:41 GMTKeane & Carragher Engage in War of Words Over Cristiano Ronaldo's Place in Man Utd's Starting XI
07:40 GMTNetizens Split as Indian Comedian Munawar Faruqui Hints at Quitting Stand-up
07:13 GMTFiji Dispatches Troops to Honiara as Solomon Islands Announces State of Public Emergency Until March
07:04 GMTRosneft CEO: Russia-China Trade Turnover Creates Great Potential for Payments in Yuan and Rubles
06:52 GMTTrump Wanted to Keep Bagram Base Under US Control After Afghan Withdrawal 'Because of China'
06:51 GMTSocialist Xiomara Castro Leads in Honduran Presidential Race
06:36 GMTThird of Swedish Police in Blighted Areas Have Mental Issues – Survey
06:27 GMTFormer US Defence Chief Mark Esper Sues Pentagon for 'Blocking' Parts of His Memoir
06:09 GMTPriti Patel to Hold Talks on Migration Crisis With European Ministers Despite French Snub
06:00 GMTKnow-How: Who Actually Made Scythian 'Gold'
05:59 GMTDenmark Bans Influencers From Advertising Cosmetic Surgery, Sugar Dating to Minors
05:51 GMTUK Convenes Urgent G7 Ministerial Meeting Over COVID Variant Omicron as WHO Urges Not to Panic
05:07 GMTMass Killer Breivik Sending Letters to Survivors With Excerpts From His Manifesto
04:47 GMTCOVID Live Updates: WHO Says Omicron Variant is Likely to Further Spread at Global Level
03:46 GMTVideo: Jacksonville Jaguars Mascot Risks it All in Failed Stunt, Still Unable to Bring Luck to Team
03:39 GMTGOP Lawmaker Says Biden’s Social Spending Plan Would Allow IRS to 'Spy' on Americans
02:53 GMTMaduro Calls EU Observers at Latest Venezuelan Elections ‘Delegation of Spies’