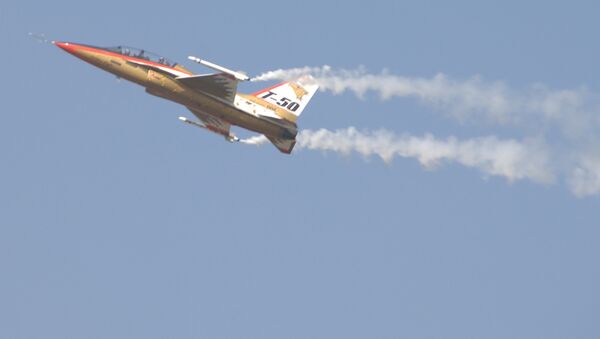 The expansion of American arms exports leaves the military-industrial complex at risk of being overtaken by countries who scooped up defense secrets without the cost of research and development.

On Tuesday, US defense industry analysts offered a report claiming that American military contractors will be overtaken in coming years by defense contractors in Israel, South Korea, and Brazil, marking an end to Western dominance over war profiteering.

The report, "Dynamics of International Military Modernization 2016," authored by Daniel Yoon and Doug Berenson from Beltway consultants Avascent blamed American military exports for the market threat, as countries buy arms at a cut rate to back-engineer US weapons technology.

"In many cases, these emerging players developed through diffused technology via prior export arrangements with Western suppliers, often through offset requirements and domestic industry participation," stated the report. In layman’s terms, foreign countries purchase US arms to steal American know-how, avoiding the burdensome taxpayer-subsidized cost of research and development.

The development occurs as the US military-industrial complex has shifted its focus toward exporting weapons to tyrannical regimes throughout the world, as a means to offset reductions in the size of the American war machine following the drawdown in Iraq and Afghanistan. According to the report, "in 2010, only 17% of defense equipment manufactured in the US was exported; by 2015, that number jumped dramatically to 34%."

US weapons-manufacturing expertise has been suggested as being in decline primarily due to Washington’s reticence to engage in war, opting instead to be the Walmart of weapon retailers for the world.

The situation is exacerbated by the Obama Administration’s trigger-happy approach to sell arms, often including troubling "offset requirements" making it easier for the nascent domestic defense industries of countries to "absorb suppliers' technical expertise."

In addition to the rapid growth of weapons manufacturing expertise in Israel, South Korea, and Brazil, the US contends with other leading arms exporters, including Russia and China, who offer high-end military technology. Analysts also suggest that the American military-industrial complex will soon forfeit market share to other nations, including Japan and India.

The report claimed that Israel may soon become the world’s premier supplier of radar, missile, and drone technology, noting that the country’s unmanned aerial vehicles are competitive with US hardware.

South Korea looks to make its mark in air superiority with the development of an indigenous fighter jet and a next generation T-50 design. In addition to the aerospace field, South Korea excels in the production of destroyers, frigates, amphibious assault vehicles, and assault submarines, the report said.

Brazil, by contrast, aims to occupy the lower-tech echelons of the market, at a cut-rate price exploiting a niche in light attack aircraft thanks to a partnership with Saab to produce the Gripen fighter.

American military superiority is thought to be endangered by the growing export of defense technology throughout the world, leading some analysts to worry about the future of the US weapons industry, and the safety and security of the country.