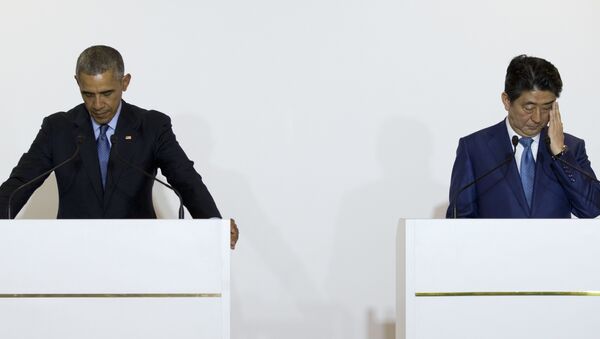 Tens of Thousands of protesters screamed “US Troops Get Out” on Wednesday as President Obama visited Japan with hopes of expanding joint military relations.

US President Barack Obama arrived in Japan Wednesday for a meeting of the G-7 amid a roar of protest by tens of thousands of Japanese residents screaming "US Troops Get Out." Longstanding anti-American sentiment contributed to protests triggered by the rape and murder of a 20 year-old Okinawa woman by a US Marine stationed in the area.

The incident opened decades-long outrage about the presence of US troops on the island at a precarious time for the Obama Administration which looks to consolidate support throughout the Pacific Rim to counter the expansion of China.

Since 1972, US military personnel in Japan have been linked to 26 murders, 129 rapes, and 394 instances of home invasion or arson, leaving many Okinawan residents to feel that they exist under an occupying force.

Japanese Prime Minister Shinzo Abe expressed his "strong indignation" directly to President Obama during a face-to-face meeting about the rape and murder by the US Marine, as well as other crimes committed by American forces.

During a joint press conference, Abe said "As Japanese Prime Minister, I protested sternly to President Obama over the recent incident in Okinawa and I feel strong indignation about the selfish and extremely mean crime." President Obama expressed empathy for the concern of the Japanese Prime Minister and his people, calling the crime completely "inexcusable" and "reprehensible."

The mass wave of protests against America’s military presence comes days after President Obama ended a five-decade arms embargo on Vietnam and one day before his heavily publicized visit to Hiroshima, the site of the atomic bomb blast that killed some 140,000 city residents in 1945.

The US President’s Asian apology tour signals Washington’s growing unease about an increasingly assertive China, but the growing frustration of the Japanese populace runs counter to Washington’s desire to contain Beijing by forming a major regional counter-alliance.

On Tuesday, Loud & Clear’s Brian Becker sat down with journalist Daniel Lazare to discuss President Obama’s visit to Japan and whether the popular protests will derail America’s plan of enlisting Tokyo in the effort to restrain China.

​Will the frustration of Japanese protesters derail Obama’s ‘Asian Pivot’?

The journalist explained that thousands have gathered in cities across Japan to protest the brutal rape and murder of the 20-year-old Japanese woman by a US Marine stationed in Okinawa, but that it is impossible to tell whether the agitation against the American military presence will result in a military withdrawal.

Notwithstanding the wishes of the Japanese people, Lazare believes that Japan’s Prime Minister Shinzo Abe will compromise and look to calm tensions in Okinawa as he seeks for Tokyo play a role in consolidating regional power to counter China’s influence.

"The bigger picture is simply China," said Lazare. "The US wants to maintain a forward operating base, and Okinawa is it. The US is busy remilitarizing the Western Pacific, trying to line up support among all the Pacific Rim countries to create a grand concert of anti-Chinese powers, and clearly Okinawa is a major part of that process."

Would a regional anti-Chinese coalition destabilize the region?

"The problem is that things are so rapidly deteriorating these days, the Chinese economy is just reeling with levels of indebtedness that are beyond imagination," said Lazare. "Nobody knows how to handle the problem, the economy is collapsing and there seems to be no way out of the current predicament. As that happens, China’s foreign policy will likely become more aggressive."

The journalist opined that Chinese fears of regional opposition and alienation in the midst of deepening economic woes increases the likelihood of conflict and miscalculation by the Beijing regime. He also observed that other countries in the Pacific Rim face similar degrees of destabilization rooted in economic challenges, threatening their ability to defend themselves.

"China has been somewhat aggressive of late pushing and throwing its weight around in the South China Sea and throughout the region, but I want to emphasize that there are parallel developments occurring through the region," said Lazare. "In the Philippines they elected their own version of Donald Trump. In Japan, Abe is pushing for the remilitarization of the country and he has a far rightwing posture that somewhat resembles Fascism."

"So we are seeing these destabilizing currents throughout the region," said the journalist, "and it seems to be pushing all parties towards a major conflict, but the US isn’t being very cautious with its focus, set on trying to develop an anti-Chinese coalition."