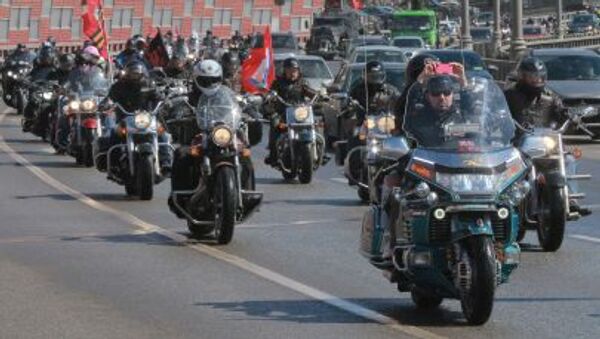 The Night Wolves motorcycle club plans to go ahead with its commemorative motocross from Moscow to Berlin in honor of the 71st anniversary of victory in the Great Patriotic War; this year, the bikers hope to avoid any provocations in Poland, says club president Alexander Zaldostanov.

Night Wolves Bikers Wow Moscow With New Year Show
Last spring, the Night Wolves motorcycle club attempted to stage a motocross from Moscow to Berlin to commemorate the 70th anniversary of the end of the Great Patriotic War. The 6,000 km trip had plans to stop at memorials and war cemeteries across western Russia, Belarus, Poland, the Czech Republic, Slovakia, Austria and Germany.

The group ran into trouble after being stopped and turned back at the Polish border, causing a minor diplomatic scandal between Warsaw and Moscow. Some of the bikers managed to get through, going around Poland and ending up in Berlin in time for Victory Day on May 9.

A year later, Night Wolves president Alexander "Surgeon" Zaldostanov says that his group will make the commemorative trip once again.

Speaking to Sputnik Poland, the biker explained that following the partial success of last year's event, he and his fellow bikers plan on doing a repeat. "Perhaps in the future it will become a tradition – meeting Victory Day on wheels – on motorcycles," he said.

The start of this year's motocross is planned for April 29.

Zaldostanov assured Sputnik that this year's event will be even larger than last year's. "The more our foes — people whose purpose is to rewrite history, to demean the victory, try to spoil our effort, the more people will support us," the biker said.

Night Wolves' Mad Max Truck Wows Lugansk Residents
Zaldostanov himself also noted that he would not be able to make the trip personally, since he is under European sanctions. "I can't get a visa," he said.

This year, the biker emphasized, he hopes that the Night Wolves will be allowed to cross the Belarusian-Polish border without any scandal.

Andrei Bobrowski, the leader of the motocross, added that this year the bikers hope for a more understanding mood from among Polish authorities.

"On May 1, we plan on crossing the border. I hope that this year everything will turn out more reasonably. We are convinced that this will be the case. We flew to Warsaw at the invitation of our Polish friends. Indeed, Polish authorities have demonstrated adequacy in their actions."

The Night Wolves' Polish friends include hundreds of Polish bikers, led by Wiktor Wegrzyn, the commander of the Katyn Rally, a Polish annual motocross which takes place across large tracts of European Russia to commemorate the Polish officers killed by Soviet security forces during WWII.

Last year, Wegrzyn and hundreds his fellow bikers protested Polish officials' entry ban on the Night Wolves, writing letters and vowing to retrace the Russian bikers' route through Poland, visiting cemeteries and war memorials along the route in honor of the 600,000 Soviet soldiers who fell in Poland during the war.

Polish Bikers Blazing a Trail Through Russia During Annual Katyn Motocross
Bobrowski said that during their journey through Poland, the Night Wolves plan on visiting a war cemetery in Wroclaw and the Auschwitz concentration camp in Oswiecim. They also plan on visiting the war memorial on Mount Slavin in Bratislava, Slovakia, and monuments to Soviet soldiers in Vienna, Austria and Dresden, Germany.

On May 9, the bikers, together with their German biker counterparts, employees of the Consulate General and representatives of veterans' organizations, plan on taking part in commemorative celebrations in Berlin's Treptow Park, at a memorial at Pankow, and at the Brandenburg Gate.