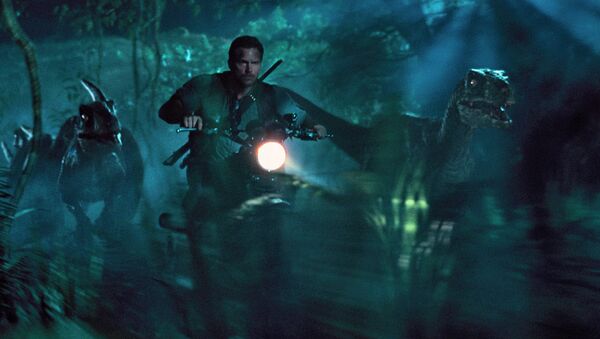 © AP Photo / ILM/Universal Pictures/Amblin Entertainment
Subscribe
International
India
Africa
Hollywood is notorious for ignoring science for the sake of the story. But "Jurassic World," the latest installment in the "Jurassic Park" franchise, may not be too far off when it comes to man's desire to weaponize the animal kingdom.

In the movie, prehistoric creatures are on display at the dinosaur park much like today's animals at the local zoo. But behind the scenes, the film's scientists are furthering the genetic engineering that returned dinosaurs to Earth in the first place, hoping to militarize the creatures.

"Just imagine if we had these puppies in Tora Bora!" a security contractor named Hoskins (Vincent D'Onofrio) says upon seeing the raptors in action.

Similarly, scientists create Indominus rex by borrowing genes from various killer dinosaurs, chameleons, and other animals. The Franken-saurus was built, in part, as an effort to genetically engineer the ultimate living weapon.

In real life, scientists are already well on their way toward genetically modifying animals for military use, writes Benjamin Soloway, of Foreign Policy:

"As the limitations of robotics become increasingly apparent, the United States' military – in a high-tech extension of a tradition that stretches from George Washington's cavalry to the dogs, dolphins, and rats of the modern battlefield – has already set off down the road toward genetically engineering animals for war."

After realizing that it was too challenging to build aircraft that were that tiny and reliable, DARPA turned its attention to insects, which are already abundant and engineered by nature to be better than anything humans could make.

DARPA has spent the past decade researching how humans can control insects and mammals through electronic impulses to the brain, as well as through genetic modifications to the nervous systems of insects, Foreign Policy reports.

The results have been surprisingly successful: Scientists can now hijack the brains of beetles and order them to stop, start, and turn, and are working on more advanced directions. Scientists also are looking to create tech-integrated insects that can be controlled by drone operators.

Over the past decade, scientists in Korea have used viruses to deliver jellyfish genes to felines, thereby creating glow-in-the-dark cats, Scientific American reported.

"Future generations are going to grow up tinkering not with computers, but with life itself," Anthes wrote. "There is a growing community of 'biohackers,' science enthusiasts who are experimenting with genes, brains, and bodies outside the confines of traditional laboratories, working on shoestring budgets in their garages and attics, or joining the community labs that are springing up around the globe."