Trapping Russia to Prove a Negative 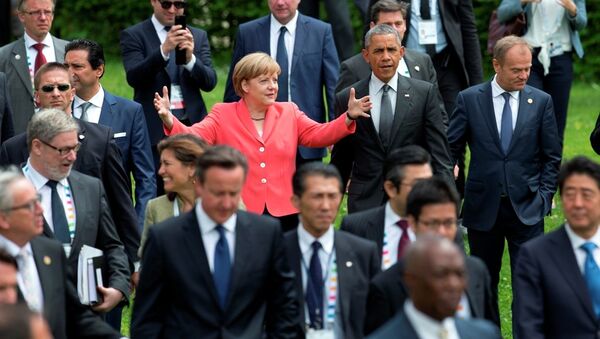 Finian Cunningham
All materials
The prove-a-negative trap is the Big Lie technique of Nazi propagandist Josef Goebbels: there is no substance to the allegations and there is no obligation to present evidence to verify, thanks to the dutiful and unquestioning nature of Western corporate “journalism”.

In Italy, Putin Sees Western Policy Backfire
The United States and its Western allies are trying to ensnare Russia in an audacious disinformation trap over the Ukraine conflict. That trap involves imposing an insoluble conundrum on Vladimir Putin's government, which we might call "prove a negative". It is a familiar conceptual device that Washington has used elsewhere, against Iraq and Iran for example, in order to pursue what are otherwise illegitimate geopolitical aims.

Russia is being held up as the guilty party that is undermining the shaky Minsk ceasefire; and Western economic sanctions are being extended "until Russia implements the ceasefire".

Wrapping up the Group of Seven summit in Germany this week, US President Barack Obama said that "more costs" would be piled on Russia over its "aggression in Ukraine". If Putin "wants to wreck his economy that's up to him," Obama said in haughty tone.

Obama's assertions were echoed by German Chancellor Angela Merkel, who said that Russia faces another six months of Western-imposed economic and diplomatic penalties. European Union leaders will meet later this month to take a final decision on extending those sanctions.

But how can Russia implement a peace deal in Ukraine if the Western-backed Kiev regime is the one that is the aggressor, not Russia? As Putin told Italian media in an interview last week, it is up to Washington and its European allies to influence the regime in Kiev to fulfil the terms of Minsk.

Speaking to Corriere della Sera newspaper, Putin pointed out: "The problem is that the current Kiev authorities don't even want to sit down to talks with them [the east Ukrainian separatists]. And there is nothing we can do about it. Only our European and American partners can influence this situation. There is no need to threaten us with sanctions. We have nothing to do with this, this is not our position.

We seek to ensure the implementation of the Minsk Agreements."

Integral to Western assertions about the implementation of the Minsk ceasefire — a truce that was in large part brokered by Putin back in February — are claims that Russia has invaded east Ukraine with troops, tanks and anti-aircraft missiles. The Kiev regime's defence minister Stepan Poltorak has in the past week claimed that "40,000 Russian troops and pro-Russian militia" are now in east Ukraine — a massive inflation of numbers from earlier Kiev and NATO claims.

Further, it is said, Russia is covertly threatening other European states with dastardly designs of expansionism.

There is no evidence to substantiate the claims of Russian troops inside Ukraine, even though these accusations have been flying around the Western media for more than a year now. Surely, a US or NATO satellite must have a credible image of such Russian presence by now?

Besides, Moscow has consistently denied any such involvement of its armed forces in Ukraine.

Russia Doesn't Need Membership in 'Tragic Farce' of Contemporary G7
As for the alleged Russian aggression toward the rest of Europe, as Putin also noted in the above interview: "US military spending is higher than that of all countries in the world taken together. The aggregate military spending of NATO countries is 10 times, note — 10 times higher than that of the Russian Federation. Russia has virtually no bases abroad… we are not expanding anywhere; it is NATO infrastructure, including military infrastructure, that is moving towards our borders. Is this a manifestation of our aggression?"

The prove-a-negative trap works like this: allegations are simply levelled, then amplified and repeated ad nauseam by Western mass media and an array of "experts" and pundits. It's the Big Lie technique of Nazi propagandist Josef Goebbels. There is no substance to the allegations and there is no obligation to present evidence to verify, thanks to the dutiful and unquestioning nature of Western corporate "journalism".

If Western mass media actually were to bother sending news crews to east Ukraine they would find that the reality there is the opposite of what Western governments are claiming. It is the Western-backed Kiev regime that is bombarding Donetsk City and surrounding towns and villages, killing civilians, women and children, and violating the terms of the Minsk ceasefire, as well as violating international law.

Reports from the monitoring teams of the Organisation of Security and Cooperation in Europe — conveniently ignored by the Western media — confirm these routine, horrific breaches of Minsk.

It is also American and NATO troops, not Russian, who are actually in Ukraine, supposedly on "training missions". The financial and military support from Washington and Brussels for the Kiev regime makes Western governments complicit in the aggression and crimes against humanity.

Yet in the face of this appalling reality, Barack Obama, Angela Merkel and other Western leaders have the gall to lecture Russia about implementing a ceasefire that they themselves are trashing via the illegal Neo-Nazi junta that they installed in Kiev back in February 2014. This is while these Western governments say that it is they who support Minsk.

Moreover, sanctions are imposed on Russia by the West in an aggressive attempt to wreck the country's economy because Russia cannot disprove something that does not exist — that is, Russian aggression and subversion in Ukraine, or elsewhere.

The proving-a-negative conundrum has been used elsewhere by Washington. Recall how Saddam Hussein's Iraq was compelled to "demonstrate" that it did not possess weapons of mass destruction.

Saddam couldn't comply with that ultimatum because Iraq did not have any WMDs. But his "failure" was construed as "evidence" that the Iraqi leader was concealing WMDs. Then in March 2003 the US under President GW Bush launched a genocidal war of occupation on the country, during which over a million Iraqis died, and whose horrific legacy of violence and extremism still persists to this day in that country and the wider region.

China Condemns 'Irresponsible' G7 Leaders' Declaration
We see the exact same ruse played against Iran. Tehran is accused by Washington and its Western allies of secretly planning to build a nuclear bomb. No evidence is produced despite countless IAEA inspections, and indeed Western intelligence agencies have quietly admitted there is no evidence of any such nuclear ambitions. But still the accusations and insinuations continue against Iran, which then "justify" the imposition of crippling economic sanctions and interminable political wrangling that denies Iranian national rights.

All because Iran can't prove a negative, that it is not building a nuclear bomb now, or sometime in the future.

Russia is finding itself contending with the same irrational Western mindset. It is a mindset that is deliberate and cynical. Of course, it is the West that is being deceitful and outrageously obtuse. And it gets away with this impossible irrationality largely because the Western media serve to give it credibility.

However, one positive development in recent years is that there is no longer a Western monopoly on information and "news". The West's propaganda power is steadily diminishing with the ineluctable rise of alternative, credible sources of information.

Today, the emergence of global communications is helping to turn the tables on those who practice the cynical trap of prove-a-negative. And Washington and its European minions are liable to end up trapping themselves with their own abundant lies and criminality. That applies to Ukraine and much else.