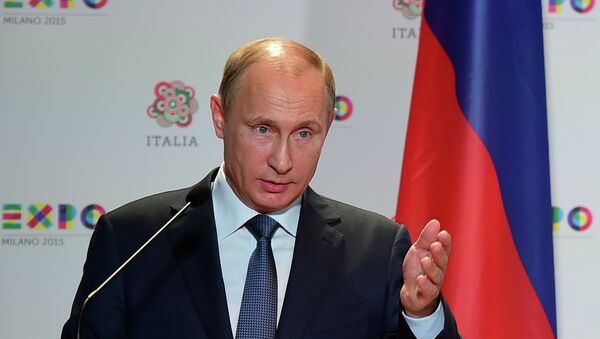 © AFP 2021 / OLIVIER MORIN
Subscribe
Russian President Vladimir Putin met with Italian Prime Minister Matteo Renzi in Milan on Wednesday, where they discussed both international cooperation and the thorns that have popped up in recent years.

Meeting with Italy's Prime Minister on Wednesday, Russia's President discussed cooperation, but also the issues that have popped up between the two countries as a result of decisions made by NATO, the European Union and G7.

Putin and Renzi did not discuss the lifting or easing of EU sanctions against Russia. They did look at the negative impact that the sanctions had on the relationship between Russia and Italy, both in terms of trade and military cooperation. The suspension of economic ties did not greatly impact Russia's defense capability, but led Italian companies to lose around a billion euros, Putin said.

Putin also weighed in on the Mediterranean migrant crisis, and how it was a direct consequence of the NATO intervention into Libya's 2011 civil war.

"It’s obvious that what is currently happening in Libya is the direct consequence of a social and economic catastrophe and endless sorties of radical groups. We are convinced that what is occurring before our eyes is the factual collapse of the Libyan state, which is the result of the foreign military intervention in 2011," Putin said.

"We are actively conducting dialogue, and exchange views on an array of issues. We discussed several UN Security Council resolutions… and we joked during the meeting that we need Russia's support and help on the Libyan issue; if it doesn't give us this support, we won't go to the official dinner," Renzi said.

Putin added that Russia and the G7 have no relations as the group decided that it no longer needs Russia's point of view on international issues.

Putin added that Russia backs the complete implementation of the Minsk agreement and, like Italy, sees no alternative to a peaceful settlement in the Donbass region.

000000
Popular comments
To be fair, both Russia and China voted in favour of the 2011 no-fly zone UN resolution that led to the NATO intervention in Libya and to the subsequent assassination of Colonel Gaddafi. In this respect, notwithstanding that the US, UK and France exceeded the terms of that resolution, Russia has some degree of responsibility for the present situation. It would be good, I think, if President Putin were to publicly accept this fact and point to the Russian veto on a similar resolution for Syria as being a result of the abuse made by NATO of the Libyan resolution.

the4huggybears
10 June 2015, 19:54 GMT
000000
American Elitists have used the Dollar's status as the world reserve currency, to become a vain, domineering, parasite. They could have chosen a thousand ways to do something/anything productive and positive and now those opportunities are lost. The sooner the rest of the world is free of the US Empire the better for all concerned.
scottw126
10 June 2015, 21:27 GMT
000000
Newsfeed
0
New firstOld first
loader
LIVE
Заголовок открываемого материала
Access to the chat has been blocked for violating the rules . You will be able to participate again through:∞. If you do not agree with the blocking, please use the feedback form
The discussion is closed. You can participate in the discussion within 24 hours after the publication of the article.
To participate in the discussion
log in or register
loader
Chats
Заголовок открываемого материала
Worldwide
InternationalEnglishEnglishMundoEspañolSpanish
Europe
DeutschlandDeutschGermanFranceFrançaisFrenchΕλλάδαΕλληνικάGreekItaliaItalianoItalianČeská republikaČeštinaCzechPolskaPolskiPolishСрбиjаСрпскиSerbianLatvijaLatviešuLatvianLietuvaLietuviųLithuanianMoldovaMoldoveneascăMoldavianБеларусьБеларускiBelarusian
Transcaucasia
ԱրմենիաՀայերենArmenianАҧсныАҧсышәалаAbkhazХуссар ИрыстонИронауОssetianსაქართველოქართულიGeorgianAzərbaycanАzərbaycancaAzerbaijani
Middle East
Sputnik عربيArabicArabicTürkiyeTürkçeTurkishSputnik ایرانPersianPersianSputnik افغانستانDariDari
Central Asia
ҚазақстанҚазақ тіліKazakhКыргызстанКыргызчаKyrgyzOʻzbekistonЎзбекчаUzbekТоҷикистонТоҷикӣTajik
East & Southeast Asia
Việt NamTiếng ViệtVietnamese日本日本語Japanese俄罗斯卫星通讯社中文（简体）Chinese (simplified)俄罗斯卫星通讯社中文（繁体）Chinese (traditional)
South America
BrasilPortuguêsPortuguese
NewsfeedBreaking
18:09 GMTPicasso’s Daughter Donates 9 Heirlooms in Tax Arrangement With France
18:01 GMT'F**k Off, Leave Me Be Please': Sex Education’s Asa Butterfield Annoyed With Pic-Taking Fans
17:56 GMT'Booby' Prize: XR's Topless Protester Goes Bust to Raise Funds on OnlyFans
17:51 GMTPorn Case: Businessman Raj Kundra Granted Bail After 2 Months of Arrest
17:47 GMTKosovo Police Reportedly Use Tear Gas Against Serbian Protesters
17:44 GMTLawyer for Trump Organization’s Ex-CFO Has ‘Strong Reason to Believe’ More Indictments Incoming
17:36 GMTMystery Death: Noted Hindu Seer Found 'Hanging Inside Monastery' in India
17:23 GMTFans Slam PSG Boss Mauricio Pochettino as Lionel Messi's Reaction to Being Subbed Goes Viral
17:16 GMTWoman Spots 4Ft-Long Crocodile on the Loose in a Yorkshire Garden
17:14 GMTUN Chief Calls for Decisive Action to Avert 'Climate Catastrophe' Ahead of Glasgow Summit
17:08 GMT'Multiple Injuries' Reported in Shooting at Virginia High School
17:05 GMTAlien Tech Could Cause 'Solar Explosion' That Might 'Wipe Out Life on Earth', Blogger Claims
16:22 GMTTwitter Mocks Journo Claiming Biden Victim of ‘Uncontrollable Events’
16:01 GMTUS 'Has No Intention to Extend Nuclear-Powered Sub Support' to Other Countries After Australia
15:45 GMTMystery Deepens Around Gabby Petito's Disappearance as FBI Finds Body Matching Her Description
15:45 GMTConcerns Over 'So Many Open to Pursuing a Career in Pornography' Amid UK Survey Results
15:40 GMTSwiss Foreign Ministry Calls Reports on Cancellation of Parmelin-Macron Meeting Incorrect
15:09 GMTRadical Daesh Women Blamed for Dozens of Killings at Al-Hol Syrian Detention Camp
15:00 GMTPutin Says Perm University Shooting is Huge Disaster for Whole Country
14:56 GMTSign of Normalisation as Syria’s Defence Minister Visits Jordan to Discuss Border Security