US Casualties in Bulgaria Blast Were Testing Weapons for Syria Opposition 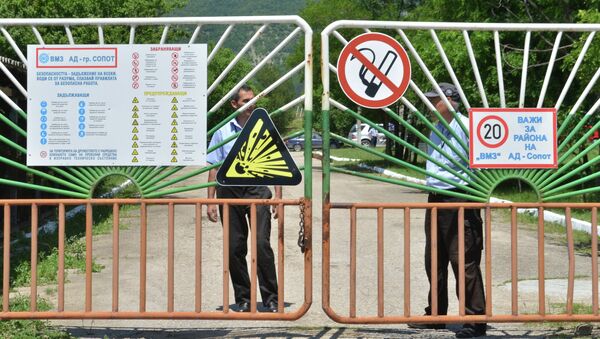 The US military contractors who were hit by an explosion at a Bulgarian military complex had been there to test weapons to arm Syrian opposition groups fighting the self-proclaimed Islamic State terrorist group.

West 'Sticking Their Fingers in the Dam' Over Failing Anti-ISIL Strategy
The blast occurred Saturday, at a military plant owned by Bulgarian state-owned arms manufacturer VMZ Sopot near the village of Anevo.

One American was killed in the explosion, and two Americans and two Bulgarians were injured when a rocket propelled grenade malfunctioned at a range in the complex, Reuters reported.

Though authorities have not commented so far on what the Americans were doing there, a military official spoke to Reuters on condition of anonymity said that the US contractors were there to to screen and select weapons for the US-led operation to train and arm moderate Syrian groups fighting the Islamic State.

"These guys were out there prepping (arms) for eventual transfer… for the Syria T&E [train and equip] effort," the official told Reuters.

The Bulgarian economy ministry told Reuters that the range where the blast occurred had been hired by Alguns, a privately-owned Bulgarian arms company. The grenade that malfunctioned also belonged to them, though it had been produced in 1984 at a Bulgarian military plant. The ministry said, however, that Alguns had not been given an arms export permit for weapons such as the grenade that failed.

Bulgarian authorities have opened an investigation into the incident but so far the government press office and the defense ministry have not commented on it. The US Embassy in Sofia also declined to comment.