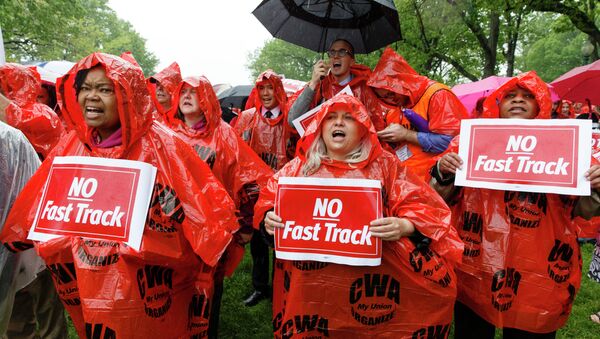 © AP Photo / J. Scott Applewhite
Subscribe
International
India
Africa
Under a secretive trade deal, countries could be barred from trying to control where their citizens' personal data is held or whether it is accessible from outside the country, according to a leaked draft of the deal.

WikiLeaks on Wednesday released 17 documents related to the Trade in Services Agreement (TISA), a controversial pact currently being hashed out between the United States, the European Union and 23 other countries.

The deal is intended to remove barriers to trade in services and, if passed, could have huge implications. Wikileaks claims that “services” make up nearly 80% of the United States and European Union economies.

The pact could be sped through Congress with passage of Trade Promotion Authority (TPA), also known as fast-track authority. The Senate has passed fast-track, and it could be taken up in the House this month. Under TPA, Congress cannot make changes to trade deals; only give yes-or-no approval.

Under the draft agreement of TISA, the EU would be barred from requiring the personal data of its citizens to be held within European borders.

"No Party may require a service supplier, as a condition for supplying a service or investing in its territory, to: (a) use computing facilities located in the Party's territory," states a draft leaked by WikiLeaks.

Those who oppose TISA – along with similar pacts that deal with goods rather that services, the Trans-Pacific Partnership (TPP) and the Transatlantic Trade and Investment Partnership (TTIP) – have been staunch critics of the secrecy behind it.

"Once again WikiLeaks reveals what we cannot learn from our own government, a government that defaults to giant trade deals that affect generations of Americans shrouded in secrecy until they are virtually adopted," Communications Workers of America President Larry Cohen said in a statement.

WikiLeaks has twice before leaked sections of the TPP. On Tuesday, the group offered a $100,000 reward for the remaining chapters.

White House Press Secretary Josh Earnest on Wednesday said the release of those documents would mean little, especially considering that the trade deals have not been finalized yet.

"Our reaction is just simply that there is no TPP agreement right now. When we have one, it will be made public," said Earnest. "The president continues to be confident that if we're able to reach an agreement, it will be consistent with the TPA legislation that has already passed the Senate and hopefully will soon pass the House."