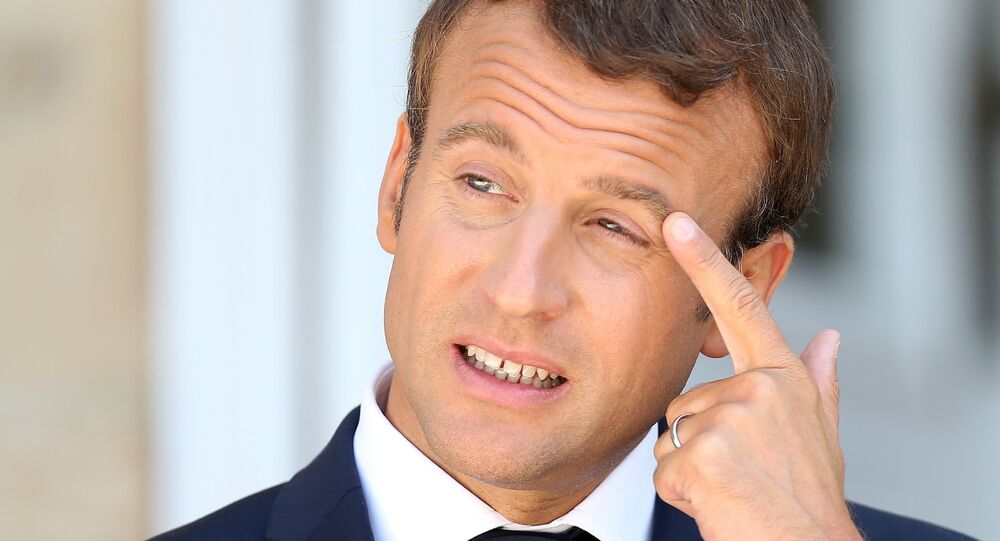 Following France's victory on July 6 over Uruguay, Macron is due to come to cheer for the national squad during its July 10 bout in the semi-finals.

French President Emmanuel Macron has been lambasted for postponing a comprehensive plan to battle poverty in France in light of a trip to Russia to root for the World Cup team, according to a report in The Local.

Originally, the head of state was due to announce a plan to provide aid for 8.7 million French living below the poverty line on July 10, and the move has already attracted a great deal of media attention.

France, in the meantime, defeated Argentina at the Russia-hosted World Cup and subsequently beat Uruguay 2-0 on Friday, thereby advancing the country to the semi-finals.

Macron announced his intention for the first time as far back as May, saying that he would travel to Russia to attend the playoff match if the national squad made it far in the championship.

Agnès Buzyn, France’s health minister, who authored, among others, the anti-poverty draft, noted that there could be uncertainty over whether the president would be in the country on the scheduled day to present the plan. According to a number of officials, the gathering could be postponed until September. The Secours Catholique, one of France’s biggest charities, immediately weighed in on the debate, fencing with a comment:

Lydia Guirous, spokeswoman for the right-wing Republican Party, echoed the same line of thinking, pointing to the president’s “cynicism”:

"Macron’s cynicism is seen again with the postponement of the report on poverty," she tweeted.

Following the news report, one Twitter user even remarked that it would be more “decent” to support Uruguay in the July 6 clash:

So I guess the decent, humane thing to do is to support Uruguay today https://t.co/9MFjfJ0zme

French Twitter was quickly set ablaze, with some referring to a pool for the Macrons, which has recently hit the headlines:

“The poverty plan can wait. The pool for the comfort of Macron, will not wait.”

“…This is the last crazy idea of President Macron whose policies were built by and for the better-off. Grasp it: the poor can wait!”

“Poverty, Islam, Bioethics / @EmmanuelMacron postpones topics that makes one angry. The postponement of the poverty plan till the start of a school year added to other files creates misunderstanding.”

The government sensed the public’s mood and came up with an official statement saying “football is not the only reason for the postponement,” adding, however, that “one doesn’t make” such an important announcement on football days.

The counter-poverty plan is meant to dispel accusations that Macron is “the president of the rich.”

According to a fresh survey conducted by the pollster Odoxa-Dentsu-Consulting for the radio station France Info and Le Figaro, over 70 percent of the French have branded the incumbent president’s policies as “unjust” and 65 percent consider his measures “ineffective.” Notably, among those polled were also left-wing politicians from "Unbowed France" (“France Insoumise”) and the Socialist Party, as well as right-wingers, namely the lion’s share of Republicans and “The National Union.”

Emmanuel Macron took office in May last year and has since launched a series of reforms. These have included labor reform and, more recently, proposed changes to France’s state-owned railway system, prompting trade unions to protest the move.