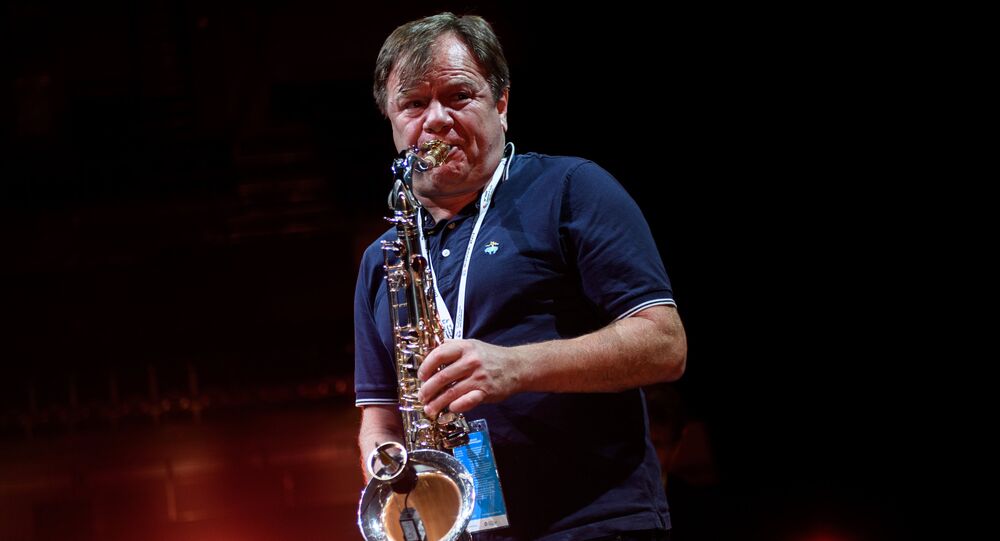 WASHINGTON (Sputnik) - The Russian Embassy in the United States has marked the end of the 2018 FIFA World Cup with a concert by Russian saxophone virtuoso Igor Butman and the Igor Butman Quintet.

Minister-Counselor of the Russian Embassy in the United States Dmitry Zhirnov congratulated representatives of the French Embassy on France’s win in the World Cup final and presented them with a special gift.

"We cordially congratulate the members of the French Embassy on their new champion’s title," Zhirnov said. "I would like a representative of the French Embassy to join me on stage, as we have a special celebratory gift on this happy occasion from Ambassador Anatoly Antonov to the head of the French diplomatic mission in Washington Gerard Araud. It is a Russian Imperial porcelain with our Embassy’s logo that will come in handy during a fancy Russian tea party."

Butman, who was a World Cup ambassador for one of the host cities — Saransk, is currently on a world tour and could not attend the final match.

"Today, at this event we celebrate the end of the World Cup and the winners," he said. "Today’s evening is really special."

Butman noted that during the final game he was at the airport, where everyone was watching the game.

"Everyone was nervous. Some cheered for Croatia, while some cheered for France," Butman said. "I was happy when either team scored. It’s a beautiful game that makes people happy. The crowd of people watched, listened, and worried. People forgot about everyday problems, and that is exactly what music and sport should do, they unite people."

"People have seen that Russia is kind, beautiful, not aggressive, and responsible," he explained.

© Sputnik / Alexander Vilf
French National Team Leaves Russia After Winning 2018 World Cup (VIDEO)
Besides, Butman added, the World Cup showed that there are a lot of great teams like Croatia, the new English team, the young France team, Belgium and, of course, Russia, who played excellently.

The event was organized and held with the support of Susan Carmel, chairperson of the American-Russian Cultural Cooperation Foundation, and the Sustained Dialogue Institute.

READ MORE: 'The World Cup is an Epic Event and it's Been Awesome' — Samy Naceri

Carmel told reporters that she was honored to organize the event featuring Butman to "celebrate both the unifying excitement of the World Cup and the sharing spirit of cultural exchange."

"The World Cup is certainly cultural, it involves so many nations. I saw for myself when I was in Russia how wonderful everything was run," Carmel said. "Everyone was commenting on the incredible Russian hospitality that they received and I myself, and the group that I was with the same thing, it was very impressive."

Carmel also pointed out the spirit of camaraderie and friendship in Russia during the games among the people from many different countries.

"Everyone was there for one reason to share one event. What the Soccer World Cup did particularly in Russia and the way it was run was bring people together from so many countries," she stressed.

Butman’s performance was accompanied by a slideshow of highlights from the 2018 FIFA World Cup championships.

© AFP 2020 / PATRICK KOVARIK
Paris Metro Stations Temporarily Renamed to Celebrate France's World Cup Triumph
Many guests of the event came in their countries jerseys. Russian, Argentine, German, Turkish and many others could be seen during the event. The halls of the embassy were decorated in football theme: with Zabivaka wolves and balls on the tables, and banners with Russia’s host cities of 2018 FIFA World Cup. The Zabivaka mascot greeted guests and posed for pictures with them.

Russia's first-ever FIFA World Cup kicked off on June 14 and came to a close on Sunday with 64 games played in 11 cities across the country. In the final game, French players secured their second title after beating Croatia 4-2 at Moscow's Luzhniki Stadium. Hosts Russia advanced to the quarter-finals but were eliminated on a penalty shootout by Croatia.