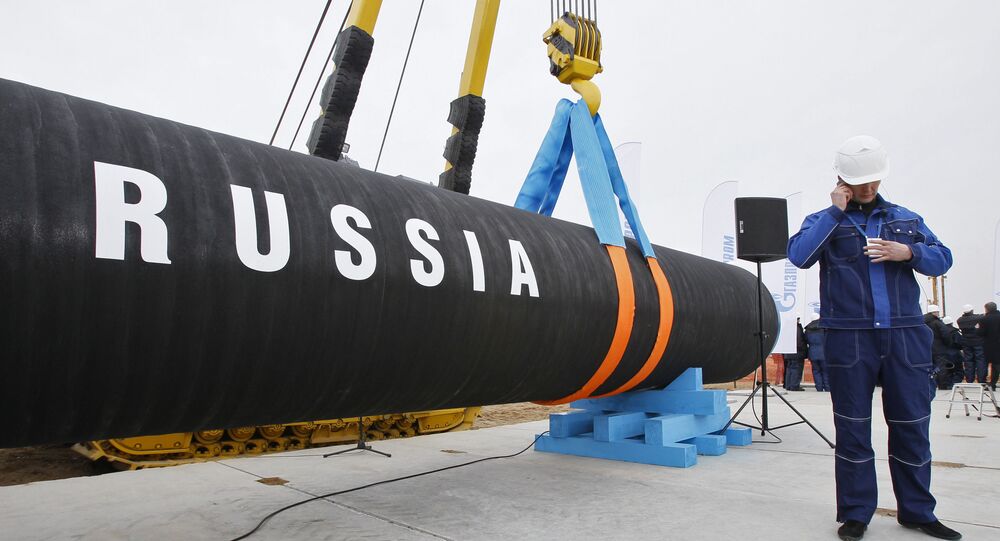 US, Germany Threaten Retaliatory Action Against Russia in Draft Nord Stream 2 Accord - Report

An undisclosed senior US official told media that the phrasing of the draft accords is purposefully unclear since the administration did not want to provide Russia a road map for responding to any harmful action against it.

As the US and Germany have reportedly reached a deal on the Nord Stream 2 project, Bloomberg reported on Tuesday, citing the obtained draft text of the agreement, that it would threaten sanctions and other measures if Russia tried to use energy as a "weapon" against Ukraine, though it did not specify what actions could provoke the countermeasures.

According to the report, in such a case, Germany will take unspecified national action, a decision that may represent a concession from Chancellor Angela Merkel, who had previously refused to take independent action against Moscow over the gas pipeline that will run from Russia to Germany.

The US official quoted in the report said that such action may include reducing gas flows from Russia to Germany.

© Sputnik / Dmitrij Leltschuk
US, Germany Reach Deal Allowing Completion of Nord Stream 2, WSJ Reports
On Tuesday, Ned Price, a spokesman for the US State Department, told reporters that he did not have final details of an agreement to announce, but that "the Germans have put forward useful proposals, and we have been able to make progress on steps to achieve that shared goal, that shared goal being to ensure that Russia cannot weaponize energy."

The US was hoping for explicit language that would commit Germany to shut down gas delivery through Nord Stream 2 if Russia attempted to exert undue influence on Ukraine. Germany, on the other hand, has long rejected such a move, stating that such a threat would only serve to politicize a project that Merkel stresses is solely commercial in nature.

Opponents of the Russian pipeline have long claimed that it will give Moscow too much power over European national security. Biden's administration initially stated that it would try to stop construction, which was already more than 90% by the time of Biden's inauguration, but then changed its mind, claiming that such a move would be a long shot and would further aggravate tensions with the German government.

The agreement's completion in the coming days is being arranged before Ukraine's President Volodymyr Zelensky visits the US. And according to the report, Derek Chollet, a State Department counselor, was scheduled to arrive in Ukraine on Tuesday to discuss the pipeline project, which Ukraine has opposed, before continuing on to Poland, which is also opposed to it.

The US and Germany would reportedly strive to promote investments of up to $1 billion in a so-called Green Fund to aid Ukraine's transition to greener energy sources under the draft deal. Furthermore, according to the document, Germany would make a $175 million initial investment in the fund.

Germany would also designate a special ambassador to assist bilateral energy initiatives with Ukraine, with $70 million in funding.

The accord would also commit Germany to use its influence to prolong Ukraine's gas transit arrangement with Russia beyond 2024, possibly for up to ten years. Those talks would begin no later than September 1, according to the news outlet.

Politico reported earlier in the day that the Biden administration has conveyed to its Ukrainian counterparts that Kiev should not engage in criticism of the deal between the US and Germany regarding the Nord Stream 2 project.

Moreover, US officials have also signaled to Kiev that the existing bilateral relationship will suffer damage if Ukrainian officials discuss the United States and Germany’s potential plans with members of Congress, the report said.

Also on Tuesday, a source within the German government told Sputnik that the negotiations between the US and Germany on the Nord Stream 2 pipeline are ongoing, although they declined to divulge further details.

"As the Federal Chancellor [Angela Merkel] said last week, the federal government is negotiating with the US authorities on Nord Stream 2. These negotiations are ongoing. As usual, we do not comment on specific topics of the talks," the source said.

Earlier this week, the US media reported that Berlin and Washington were close to unveiling a deal that would avert the resumption of currently waived US sanctions against Nord Stream 2 AG, the pipeline's parent company, and its CEO Matthias Warnig.

The almost completed Russia-led project intends to transmit natural gas directly from Russia to Germany. As a strong opponent of Nord Stream 2 and a self-proclaimed proponent of European energy independence, Washington has levied repeated rounds of sanctions on firms and individuals involved in the project. The German government, on the other hand, continues to back the pipeline's construction and has slammed Washington's efforts to sabotage it.

The US and EU have agreed that the pipeline should not be used to exert pressure on Ukraine and that Kiev should continue to have access to gas transit. Russia, for its part, has always maintained that the project is of a purely commercial nature and has asked others to refrain from politicizing the matter.