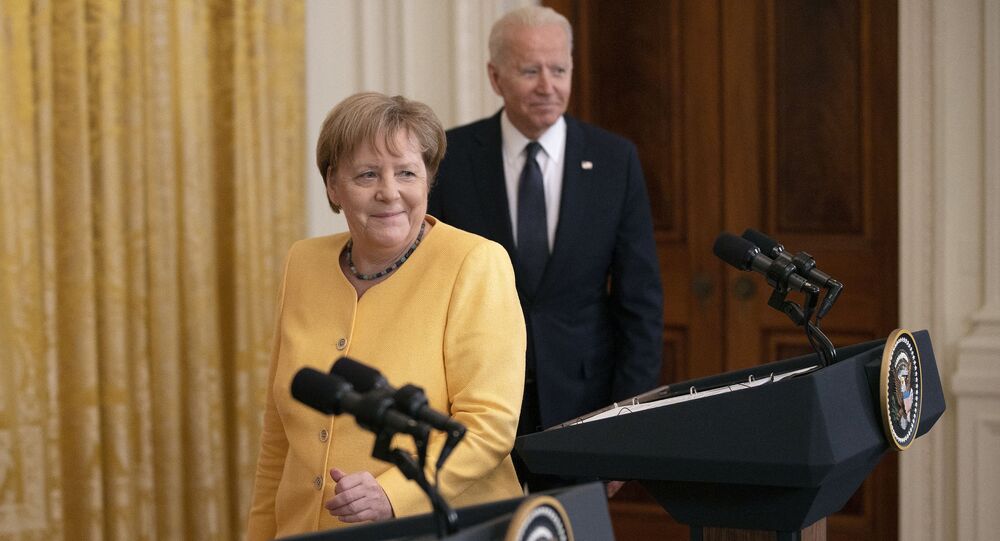 WASHINGTON (Sputnik) - During a bilateral meeting at the White House, US President Joe Biden and German Chancellor Angela Merkel discussed the Nord Stream 2 pipeline, along with other issues, including climate change.

The Biden administration has consistently stated its objection to the Nord Stream 2 gas pipeline, citing concerns over European and Ukrainian security, particularly in the energy sector. The project continues to go forward, however, with construction upwards of 90% complete, according to reports.

"We talked about Russia and Ukraine and in this context also about Nord Stream 2. We've come to different assessments as to what this project entails", Merkel said during a press conference following a bilateral meeting between the two politicians on Thursday, with Biden adding shortly thereafter that "good friends can disagree" on such matters.

Both sides, though, are preparing contingencies should agreements with Russia that ensure Ukrainian security, post-construction, fall through. Biden said that both the US and Germany had assigned teams to explore practical measures that could be taken and whether the project strengthens or weakens the region, based on Russian actions.

Merkel added that the European community has "a number of instruments", such as sanctions, at their disposal, although she noted that she hopes no such decision would need to be made. She and Biden agreed that under any scenario, Russia must not be allowed to use energy as a weapon with which to threaten and coerce its neighbours.

Russian officials have repeatedly said the project is a purely commercial endeavour, adding that American opposition to the gas pipeline is an example of unfair competition.

The two politicians also agreed that their countries would stand together to defend NATO's eastern flank against Russia, reaffirming their commitment to protecting the sovereignty and territorial integrity of Ukraine.

Moscow has repeatedly rejected accusations from western countries of "aggression" on the Russian-Ukrainian border, noting that Russia is committed to bolstering security in the region in connection with an increased NATO presence there.

Biden and Merkel launched the US-Germany Climate and Energy Partnership, which aims to strengthen cooperation between the nations by addressing climate change and achieving a global net-zero greenhouse-gas future.

© AFP 2021 / CHIP SOMODEVILLA
German Chancellor Angela Merkel (R) and U.S. President Joe Biden leave a joint news conference in the East Room of the White House on July 15, 2021 in Washington, DC. During what is likely her last official visit to Washington, Merkel and Biden are expected to discuss their shared priorities on climate change and defense; and Biden voiced his concerns about the Nord Stream 2 Russian natural gas pipeline.

Additionally, Biden and Merkel discussed ongoing instability in Cuba and Haiti. In particular, Biden said that Washington is considering whether it has the technological means to restore internet access for Cuba and reiterated the White House's readiness to provide Cuba with coronavirus vaccines.

"I'd be prepared to give significant amounts of vaccine if in fact I was assured an international organisation would administer those vaccines and do it in a way that average citizens would have access to those vaccines", Biden said.

The US president took a verbal shot at communism, calling it a "universally failed system" and arguing that he does not see socialism as a useful substitute.

Cuba has recently seen massive protests, with thousands flocking to the streets demanding free elections and an improvement in the social and economic situation in the country. With the United States voicing its concerns regarding the humanitarian situation in Cuba, Havana responded with assertions that the protests are to be blamed on Washington, given that the trade blockade imposed on Cuba in the 1950s remains in place.

In regard to Haiti, the US president said that sending American forces there is "not on the agenda".

The meeting between the two leaders took place amid heavy flooding across Germany that has left approximately 1,300 people missing and at least 58 dead. Biden began the joint press conference by offering his condolences to the German people.