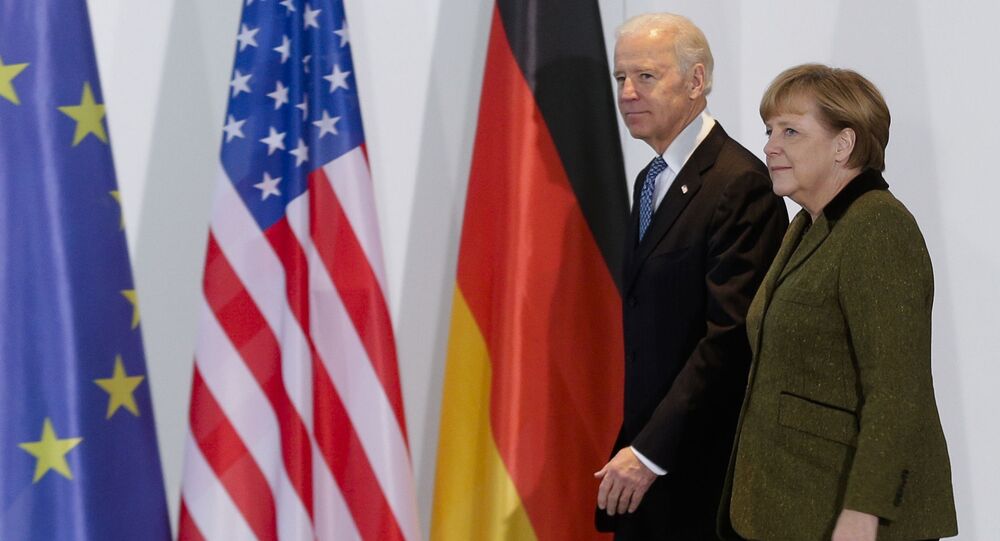 The opinion piece suggests that the German chancellor’s visit to the US will be partly devoted to ironing out disagreements in the relations between Washington and Berlin, not only over the Russian-European gas pipeline, but also over Germany's support for the Chinese grand investment deal with the EU.

As the end of her long service as German chancellor draws near, Angela Merkel has managed to "snub" US President Joe Biden twice as Washington and Berlin started working on repairing their ties following Trump's presidency, Bloomberg columnist Andreas Kluth has claimed in his latest op-ed.

According to him, Merkel undertook two steps that greatly disappointed Washington – she pushed forward a Chinese-European investment deal and refused to stop the construction of the joint European-Russian Nord Stream 2 pipeline project. Kluth calls the latter "worse", as Merkel refused "to move even an inch" toward demands from the US.

"The geopolitical threat posed by Nord Stream 2 seems blatant enough for Poland, the Baltic republics, France, the European Union and other allies […] Nonetheless, the Germans keep burying their heads in the sand like geo-strategic ostriches", the columnist said.

Kluth insists that the Nord Stream 2 pipeline is a "strategic goal long pursued" by Russian President Vladimir Putin. The columnist claims that Moscow wants to "blackmail" the Ukrainian government by threatening to cut it out of the gas transit to Europe and leave it without transit payments, even though Putin has pledged to keep the transit contract alive in the coming years and promised that the transit through Ukraine will continue as long as it remains economically viable.

These assurances, however, have had no effect on demands of American lawmakers to impose new sanctions against Nord Stream 2 in order to stop its construction. A new round of economic measures was only stopped by Biden, who argued it was too late to try to stop the project, which is 98% complete. Germany, for its part, has always defended the pipeline, built jointly by Russia's Gazprom and a number of EU energy giants. Berlin has also long insisted that it is an economic project that will benefit Europe, and that it has nothing to do with politics.

The US explains its opposition to the Nord Stream 2 by claiming it will increase the EU's dependency on Russian gas, while putting Ukraine's gas transit payments at risk. At the same time, Washington has proposed an alternative to Russian pipeline gas – buying more expensive liquefied natural gas (LNG), for example, from the US itself. The EU was hesitant to accept Washington's offer, while noting that its gas supply sources are diverse enough. Germany, in turn, strongly condemned the US' extraterritorial use of sanctions that targeted the project, which is important for Berlin's energy supplies.

The Bloomberg columnist claims, however, that Merkel will now try to offer suggestions to US President Joe Biden during the upcoming meeting on how to solve "the geopolitical mess" she supposedly caused by ignoring Washington's demands to stop Nord Stream 2's construction.

"The reality is that Merkel’s obstinate defence of Nord Stream 2 will count as a stain on her otherwise expansive and nuanced legacy, and be a liability to her successor. It alienates both the U.S. and European partners by showing the hypocrisy of a country that claims to act in the interest of the EU when in fact it cares only about its own", Kluth claims.

The meeting will take place ahead of a new request expected from American lawmakers in August to impose new sanctions against Nord Stream 2, which is scheduled to be finished by that time. The previous round of sanctions against contractors working on the project only managed to briefly stall progress. POTUS and the German chancellor's meeting also comes ahead of the September election in Germany, which will determine not only the new political layout of the country, but also the person who will replace Angela Merkel in her post.