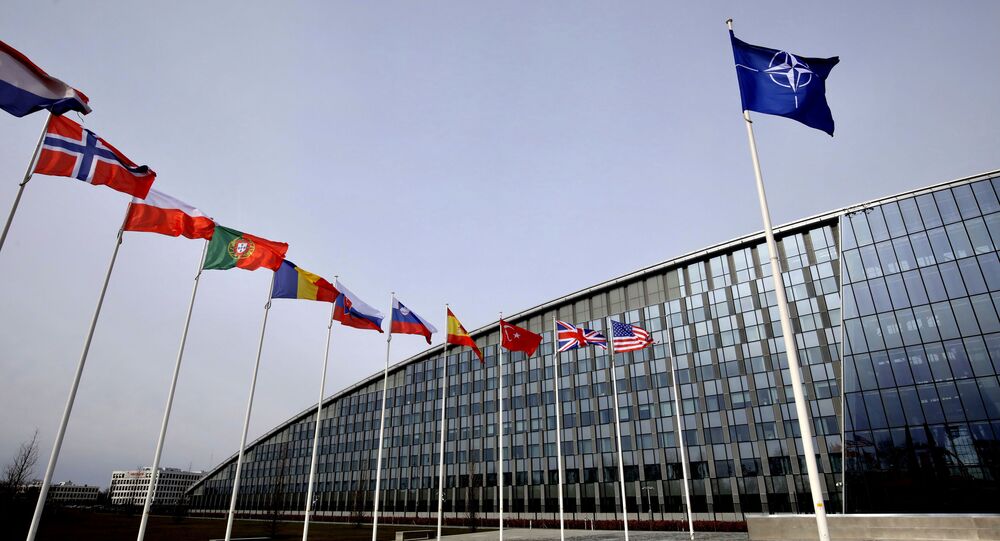 MOSCOW (Sputnik) - The leaders of the 30 NATO member states are set to meet at the military alliance's headquarters in Brussels on Monday for the first heads of state summit since 2019, and Secretary-General Jens Stoltenberg looks set to push his plans for a new strategic concept for the bloc.

NATO leaders last gathered en masse at the bloc's 2019 summit in the UK capital, London. At that time, the military alliance looked fractured, as French President Emmanuel Macron claimed that the alliance was suffering from "brain death" following the United States' decision to pull its forces out of northern Syria without consulting the military bloc.

Additionally, then-US President Donald Trump ruffled feathers within the alliance by claiming that other member states were not pulling their weight when it came to defence spending.

During his time in office, Trump frequently urged other allies to drastically increase their defence budgets in line with NATO's 2% of GDP spending target.

© AFP 2021 / STEPHANIE LECOCQ
Stoltenberg: NATO Does Not See China as Adversary, Will Include Beijing in New Strategy

Speaking at a press conference following the conclusion of the 2019 summit, Stoltenberg praised the "unprecedented" commitment by the bloc's member states to increase defence spending by a combined $400 billion by 2024.

The secretary-general on Friday announced that NATO allies had added a combined $260 billion to their defence budgets since 2014 but said that more targeted investments were required to help the alliance be fit to face the challenges of the future.

"We are on the right track with seven consecutive years of increased defence spending across European allies and Canada. By the end of this year, they will have added $260 billion to their defence budgets since 2014. But we need to invest even more, and better", Stoltenberg said.

According to a NATO document published on Friday afternoon, the combined defence spending of the 30 member states is set to total $1.049 trillion in 2021, an estimated 4.1% increase compared to the preceding year.

Secretary-General Jens Stoltenberg is set to be the first leader to arrive at NATO headquarters on Monday morning. He is expected to give his opening speech at 07:00 GMT, ahead of the arrivals of heads of state.

According to an agenda circulated by NATO, the heads of state meeting will commence at 11:30 GMT, with the day's activities concluding with a press conference delivered by Stoltenberg at 14:15 GMT.

Speaking on Friday, the secretary-general said that he expected NATO allies to commit to initiatives in a range of policy areas, such as cybersecurity and space.

"At our summit on Monday, we'll have far-ranging discussions and take substantial decisions to make our strong alliance even stronger and keep our 1 billion people safe", Stoltenberg said.

NATO allies are expected to agree that cyberspace is a permanently contested space and that the bloc needs to strengthen cooperation in this field, the secretary-general remarked.

"I expect allies will agree on a new cyber defence policy for NATO. It will recognise that cyberspace is contested at all times and ensure that we have strong technical capabilities, political consultations, and military planning in place to keep our systems secure", Stoltenberg remarked.

The secretary-general also said that the alliance is "determined to defend itself in space as effectively as we do in every other domain."

Monday's meeting in Brussels follows on the back of this weekend's G7 summit in the UK's southwestern county of Cornwall, which saw the leaders of the United Kingdom, United States, France, Germany, Italy, Japan, and Canada discuss issues such as the global recovery from the COVID-19 pandemic and tackling climate change.

The so-called NATO 2030 strategic concept is set to be at the centre of Monday's discussions. Stoltenberg launched the initiative back in December 2019 as a plan for modernizing the military alliance to meet the challenges of tomorrow.

In a speech delivered in January, Stoltenberg said that NATO 2030 has three key priorities: to keep the alliance "militarily strong", to strengthen the alliance politically, and to ensure that the bloc takes a more "global approach".

On the first of these priorities, Stoltenberg said that the bloc needed to invest in building more "robust" infrastructure, such as airports, roads, and railroads, adding that the alliance should also harness next-generation 5G technologies.

With the exit of Donald Trump from office, new President Joe Biden has struck a more conciliatory tone with Europe, most recently demonstrated by the Biden administration's decision to waive sanctions on the Nord Stream 2 pipeline.

Speaking in January, Stoltenberg said that NATO was the "only place where Europe and North America come together every single day", and urged for greater cooperation from countries on both sides of the Atlantic Ocean.

On NATO's global approach, Stoltenberg over recent months has stressed that the military bloc faces threats such as the "rise of China", and has said that the alliance must work to strengthen its capacity and resilience across the globe.

This global approach is also set to include Russia. Stoltenberg said on Friday that NATO's relations with Russia were at the lowest point they have been since the end of the Cold War, but added that the alliance was committed to having a "meaningful dialogue" with Russia.

Stoltenberg did not mention whether there would be discussions on Ukraine and Georgia's potential accession to NATO, but the secretary-general said that the bloc would continue to support its "valued partners" and redouble efforts to promote reforms in these two countries.