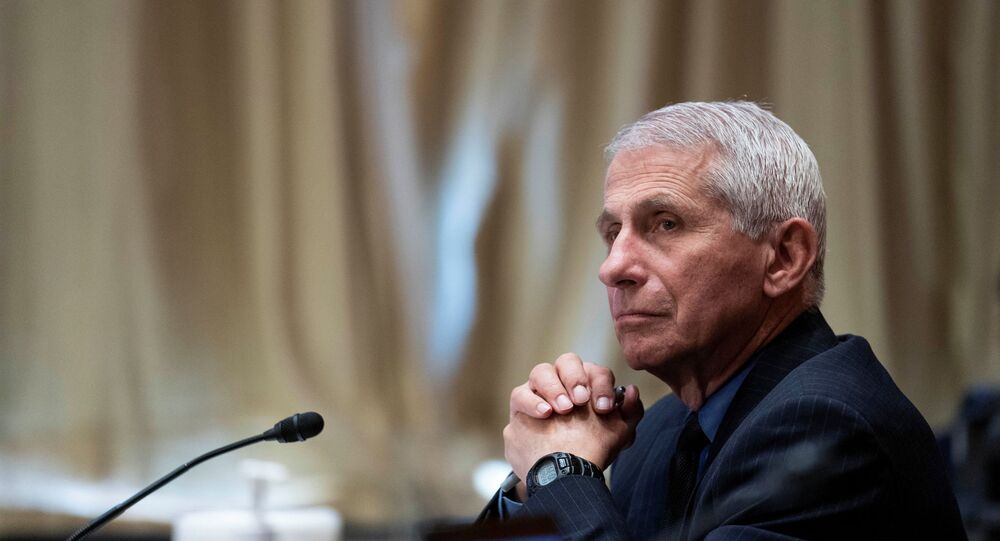 A flurry of recent media reports have revived speculations regarding the “lab leak” theory pertaining to COVID-19. On 26 May Joe Biden set a 90-day deadline for intelligence agencies to assemble a detailed report on the origins of the virus, "including whether it emerged from human contact with an infected animal or from a laboratory accident".

Anthony Fauci, the chief medical advisor to the US President, was thanked by an official of the World Health Organisation (WHO) for helping dispel speculations that the COVID-19 virus was man-made and escaped from a lab, according to a tranche of messages obtained under a Freedom of Information Act (FOIA) request by BuzzFeed.

Peter Daszak, a British zoologist who is president of EcoHealth Alliance, a nonprofit with ties to the Wuhan Institute of Virology (WIV), had sent Fauci an email on 18 April 2020, that stated:

“I just wanted to say a personal thank you on behalf of our staff and collaborators, for publicly standing up and stating that the scientific evidence supports a natural origin for COVID-19 from a bat-to-human spillover, not a lab release from the Wuhan Institute of Virology.”

Peter Daszak, who was deeply involved both in Wuhan coronavirus research & in misleading the public about the likelihood of a lab leak, thanked Fauci for helping "dispel the myths" around COVID origins and blamed Fox News for targeting his grant. From the @JasonLeopold FOIA batch pic.twitter.com/LgloFVaFZX

Daszak highlighted the fact that as Fauci’s “brave” statements to dismiss the theory were coming from a “trusted voice”, they were particularly well tailored to help “dispel the myths being spun around the virus’s origins”.

In reply, Fauci responded by writing the next day:

“Many thanks for your kind note.”

Peter Daszak, a consultant and public expert on disease ecology, and zoonosis in particular, had been the sole US-based representative sent as part of the World Health Organisation (WHO) team that travelled to China to investigate the origins of the virus.

Daszak’s EcoHealth Alliance, which supports various programmes on global health and pandemic prevention, is said to have channelled $3.4 million in grants from the National Institutes of Health to the WIV to study bat coronaviruses between 2014 and 2019.

The Wuhan Institute of Virology, which has been studying coronaviruses in bats for over a decade, is located just a few kilometres from the Huanan wet market where the first cluster of infections was identified in Wuhan in 2019.

Zoonotic transfer, the transmission of a virus from an animal to a human, occurred in the case of the SARS and MERS coronaviruses, which led to global outbreaks in 2003 and 2012.

In March, the World Health Organisation released the full version of a report by the team that visited Wuhan to conclude that the lab-leak theory was highly unlikely, and that it was probable, but not certain, that the disease was transmitted to humans by animals.

Daszak’s email made reference to statements by the physician-scientist and immunologist who serves as the director of the US National Institute of Allergy and Infectious Diseases (NIAID) during a press briefing on 17 April.

Fauci had been asked to weigh in on the speculations that the SARS-CoV-2 virus may have originated in a lab at the Wuhan Institute of Virology. In response, the physician cited a recent study, saying:

“… a group of highly qualified evolutionary virologists looked at the sequences there and the sequences in bats as they evolve… The mutations that it took to get to the point where it is now is totally consistent with a jump of a species from an animal to a human.”

Then-President Donald Trump had fed the speculations, saying at the time that the theory “seems to make sense” and that “a lot of people are looking at it”.

Of late, the lab-leak theory has been making the headlines. Anthony Fauci himself said earlier in May that he was “not convinced” that COVID-19 developed naturally.

US President Joe Biden said last week that the US intelligence community has determined there was insufficient information to assess whether the virus came from human contact with an infected animal or from a laboratory leak, and ordered agencies to “redouble their efforts” to investigate the matter and to report their findings to him in 90 days.

Furthermore, a recently-released US intelligence report cited by The Wall Street Journal claimed that three researchers from China's Wuhan Institute of Virology fell ill with respiratory infections resembling COVID-19 in November 2019, a month before China officially reported any cases.

As rumours around the origins of the deadly virus continue to circulate, Beijing has repeatedly blasted Washington on the matter, saying that establishing the origins of the virus is "a difficult scientific question" and the United States is "currently trying to let the intelligence services draw scientific conclusions".

It also slammed the US government as “full of arrogance” for disrespecting the WHO report.