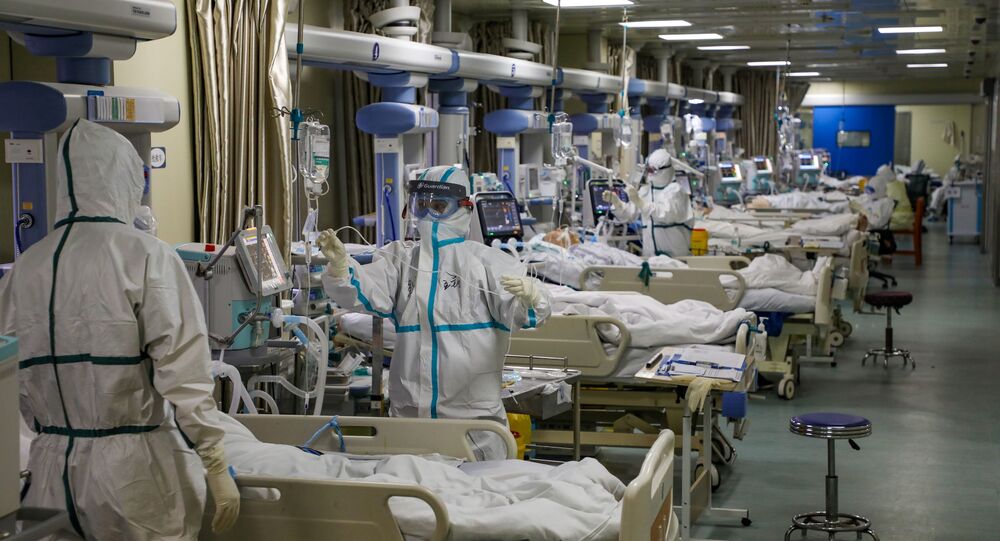 US President Joe Biden earlier ordered an intelligence probe into claims the coronavirus escaped from the institute, rather than the widely-accepted theory that it originated in wild animals such as bats and pangolins sold in markets in Wuhan, China.

China has slammed the newly announced US probe into the possibility that COVID-19 escaped from a laboratory in Wuhan, warning that Washington 'could meet its Waterloo in this battle'.

President Joe Biden’s earlier call on intelligence officials to "redouble" efforts to investigate the origins of the coronavirus to determine whether it came from a lab accident or emerged from human contact with an infected animal was denounced as “political manipulation” in an op-ed in China's state newspaper, The Global Times.

Washington is warned of “having gone too far, exposing to the world its four 'Achilles heels' by continuing to probe the 'lab leak' theory."

Beijing calls the US government “full of arrogance” for disrespecting a report issued by the WHO expert group, which stated after its mission to Wuhan that the coronavirus outbreak wasn't likely to have been caused by a leak from the lab in Wuhan, claiming the virus was most probably transmitted to humans from bats via an intermediary animal.

“This is playing political games to hijack science,” warns the op-ed.

While underscoring that tracing the origins of the coronavirus is, in itself, a highly difficult and challenging task, the article criticises the presumption of guilt imposed against the Wuhan Institute of Virology.

In a statement on 26 May Joe Biden set a 90-day deadline to assemble a detailed report on the origins of the virus, "including whether it emerged from human contact with an infected animal or from a laboratory accident".

The article in The Global Times at this point highlights the fact that the Central Intelligence Agency and other intelligence agencies have a “long record of fabricating lies for political purposes”.

The current situation is likened to Washington’s claims in February 2003 that Iraq, then led by President Saddam Hussain, allegedly possessed weapons of mass destruction (WMDs) that were used to justify invading the country.

Colin Powell, the then-Secretary of State, presented a vial of white powder at the United Nations, arguing the case that Iraq’s regime posed an imminent threat, however WMDs were never found.

On this occasion, writes the article, it will be “more difficult to fabricate evidence to fool the international community.”

“The US intelligence agencies are coming out with again but have lost their credibility at the very beginning of this race,” write the authors of the op-ed.

In conclusion, the op-ed claims that Washington has become far too arrogant to acknowledge that its accusations against China have become a “political gamble for itself”.

Stressing that the US has placed itself in a “dangerous status”, the article warns Washington that it could “meet its Waterloo in this battle”, abusing its soft power to an extent when it loses all credibility.

As US President Joe Biden ordered an intelligence probe into the origins of the virus, his predecessor Donald Trump hurried to claim the move vindicates his consistent blaming of China for the coronavirus pandemic.

"Now everybody is agreeing that I was right when I very early on called Wuhan as the source of COVID-19, sometimes referred to as the China Virus," Trump said in a statement.

A flurry of media reports of late have revived speculations regarding the “lab leak” theory.

Former US Secretary of State Mike Pompeo also weiged in, claiming the Wuhan virology lab at the centre of COVID-19 allegations has a secret military programme.

© REUTERS / THOMAS PETER
The P4 laboratory of Wuhan Institute of Virology is seen behind a fence during the visit by the World Health Organization (WHO) team tasked with investigating the origins of the coronavirus disease (COVID-19), in Wuhan, Hubei province, China February 3, 2021.

The Wuhan Institute of Virology, he stated, had been carrying out projects for the Chinese armed forces which it concealed successfully from the World Health Organisation mission that visited the city earlier this year to determine the origins of the pandemic.

Former Food and Drug Administration (FDA) Commissioner Scott Gottlieb, appearing on CBS' "Face the Nation” on Sunday, weighed in on the debate, saying that China is able to provide “exculpatory” evidence proving that COVID did not leak from a lab, but has so far refused to do so.

He also cited evidence supposedly in favour of the theory after reports that three scientists who worked there were hospitalised in November 2019.

The Chinese Foreign Ministry has vehemently rejected US media reports suggesting that the employees of the Wuhan Institute of Virology fell gravely ill right before the outbreak of COVID-19.

"Smear campaigns and blame shifting are making a comeback, and the conspiracy theory of 'lab leak' is resurfacing," said the Chinese embassy in the US in a statement on 27 May.

Since it was first detected in the Chinese city of Wuhan in late 2019, more than 168 million cases of COVID-19 have been confirmed worldwide, with at least 3.5 million deaths reported.