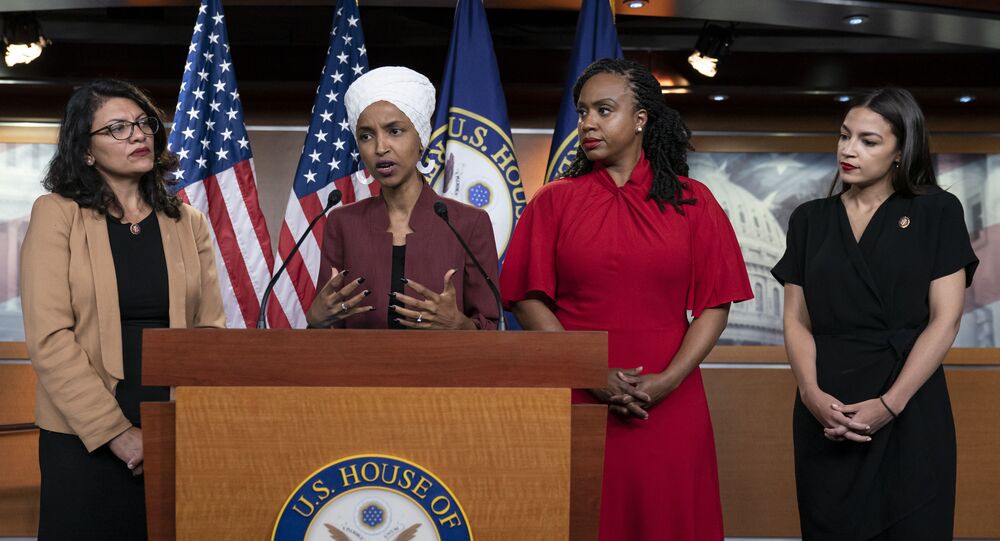 The Gaza conflict produced a wave of pro-Palestinian protests across the globe, along with a growing number of anti-Semitic incidents. In a recent example, an armed man was seen shouting anti-Israel slogans near a Los Angeles sushi restaurant.

Members of the ‘Squad’ – a term used to refer to a small group of progressive Democrats in the US House of Representatives – have been eager to condemn the recent rise in anti-Semitic attacks across the US.

However, their position has been far from univocal or even consistent, as the lawmakers have continued to slam Israel for its “apartheid” actions in relation to the Gaza Strip. Many believe that this line of argument is exactly what creates a pretext for violent attacks against Jews across the globe.

As such, Minnesota Rep. Ilhan Omar – one of the ‘founding’ members of the group, alongside Alexandria Ocasio-Cortez, Rashida Tlaib and Ayanna Pressley – harshly criticised the “horrific and unacceptable” assault outside a sushi restaurant in LA which is currently being investigated as a “hate crime” against Israelis.

Horrific and unacceptable. Nobody should face threats and harassment based on their religion or ethnicity.

​At the same time, Omar previously called on the US to stop selling “Israeli Prime Minister Benjamin Netanyahu the very bombs used to kill Palestinian children.”

We should all be grateful that a ceasefire will prevent more civilians and children from being killed.

But now what? We need accountability for every war crime committed. And we need to stop underwriting crimes against humanity while doing nothing to end the occupation.

​Her ‘Squad’ colleague Alexandria Ocasio-Cortez, often referred to as simply AOC, has also been a strong critic of antisemitism, writing on Twitter that there is “no room” for it in the movement for Palestinian liberation.

"Our critique is of Israel and their human rights abuses. This is not an excuse for anti-semitic hate crimes,” AOC added.

AOC also earlier called Israel an “apartheid” state – a statement that was echoed by Missouri Rep. Cori Bush, a recent addition to the ‘Squad’. Such strongly-worded “defaming” of Israel has raised eyebrows among observers, including Jewish activist Seffi Kogen, who said that statements like that were themselves triggering “a certain type of anti-Semitism”, albeit in a “quasi-intellectual” fashion.

​According to Kogen, Ocasio-Cortez has ironically chosen to share her anti-Israel tweets from her personal account with a much larger following than the official one, where she had made statements condemning any anti-Jewish sentiments.

One is her “official” position and the other is emblematic her True feelings/beliefs.

​Bush, meanwhile, has put anti-Semitism in the same line with anti-Blackness, Islamophobia and even “anti-Palestinian racism” saying that there was “no room for hate of any kind in our movements for justice."

Pressley has echoed the sentiments of her colleague:

"I strongly condemn the rise in anti-Semitism and islamophobia we’re seeing across the country. Let me say it again: our freedom and our destinies are tied. The struggle for liberation and justice requires all of us to reject hate and division in any form,” she said in a statement, shared by Tlaib.

It’s not clear whether the ‘Squad’ members have a clear consensus among themselves as to what they are standing for and how calls to punish “apartheid” Israel are consistent with their condemnation of anti-Jewish sentiment.

Israel and Hamas announced a ceasefire on 20 May that came into force a day later following 11 days of heavy combat which led to over 200 deaths and destroyed the civil infrastructure in the Gaza Strip.