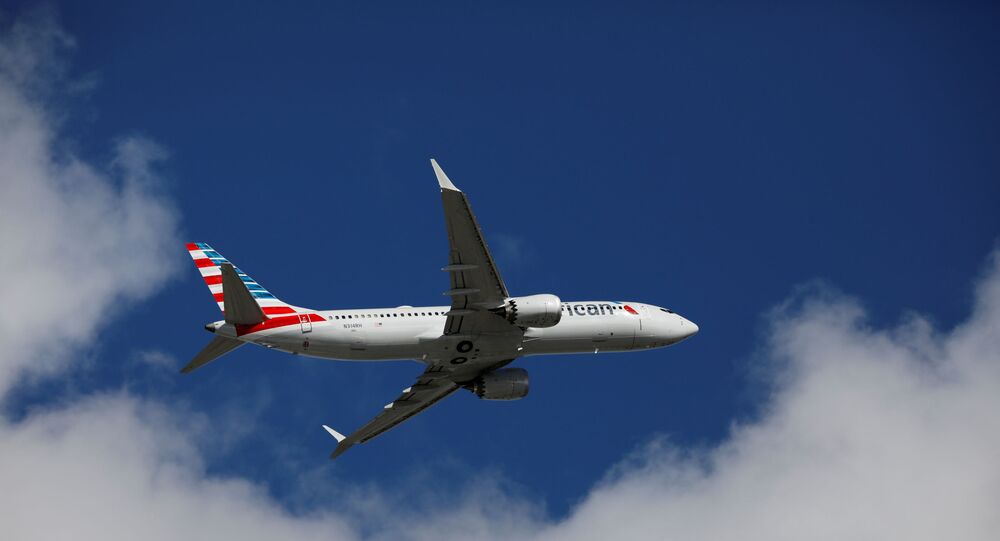 A Sriwijaya Air passenger flight that took off from Soekarno-Hatta International Airport in Jakarta, Indonesia – heading to Pontianak – is feared to have crashed into the sea shortly after take-off. The missing plane is a classic Boeing 737-500, a much older model than the company’s embattled 737 MAX.

A Sriwijaya Air passenger jet disappeared from radar shortly after taking off from Indonesia's capital Jakarta on a domestic flight on Saturday, with rescuers saying suspected debris had been found in the sea.

Indonesian Transport Minister Budi Karya said during a news conference that 62 people were onboard, including 12 crew.

Breaking: A passenger Boeing 737 is missing after losing contact with Indonesian authorities shortly after take off from Jakarta airport.

The 737 MAX was grounded globally in the wake of two fatal crashes, Lion Air Flight 610 and Ethiopian Airlines Flight 302. Both tragedies were linked to the manoeuvring characteristics augmentation system (MCAS), a new flight control law designed to help the aircraft emulate the handling characteristics of the earlier Boeing 737 Next Generation. The older 737 model, which does not have the system implicated in the MAX issue, has continued to be widely flown.

Here's a look at the history of the embattled company’s long-grounded 737 MAX plane.

In the early 1990s, Boeing also updated the model to create the 737NG, with "NG" standing for "next generation," which is still in service today.

Boeing’s 737 has been one of the best-selling commercial jetliners of all time, with over than 10,000 delivered worldwide.

The Max engines are larger, positioned further forward, and higher up on the wing than those on the 737NG, causing the plane to behave differently.

As a result, these changes could cause the plane's nose to pitch upwards, such as during low-speed flight, or flight with a high angle-of-attack when the plane was flown manually. Boeing designed the MCAS automated software to compensate for this. The MCAS would only activate if the plane was being hand-flown with autopilot off.

The software would automatically be activated to stabilise the "pitch" and bring the aircraft's nose back down.

On 13 August, 2015 the first 737 MAX fuselage was assembled at Spirit AerosSystems in Wichita, Kansas, while on 29 January, 2016 the Max made its first test flight.

By May, 2018 more than 130 Max planes were in service with 28 different global airlines.

​As pilots informed air-traffic controllers that they were "experiencing a flight control problem," it was intimated that the nose of the plane was being forced downward. After just twelve minutes of flight, the plane crashed into the Java Sea, killing all 189 people on board.

The investigation focussed on the MCAS technology and the pilots' reaction to the system within days of the Lion Air crash, while airlines around the world continued flying the Max.

On 10 March, 2019 at 8:38 a.m., Ethiopian Airlines flight 302 took off from Addis Ababa, Ethiopia.
However, pilots reported a flight-control issue within just one minute. The MCAS activated, pitching the nose downward, forcing the pilots to struggle to control the plane as the MCAS activated again.

Six minutes after takeoff, the plane slammed into the ground killing all 157 people on board. Yet again, the MCAS was cited as a contributing cause of the accident, as well as the fact that pilots failed to adjust the stabiliser trim by hand.

Ethiopian Airlines Flight 302 crashed minutes after takeoff from Addis Ababa for Nairobi, killing all 157 people on board. @ReutersGraphics tracked its journey https://t.co/aA16HhXH9f pic.twitter.com/CvHq0kOczR

​On the day of the accident, Ethiopian Airlines grounded the rest of its 737 Max aircraft. Regulators around the world followed suit, parking up their 737 Max planes.

The planes remained grounded since, leaving Boeing floundering to complete a software fix. Software approval delays stretched on, as the FAA scrutinised the plane.

​In April, 2019, Boeing cut production of the plane by 10 units, still hoping it might ramp it up once deliveries resumed.

Meanwhile, numerous investigations and lawsuits proceeded, probing how Boeing had allowed the planes to continue flying when the MCAS activated after a single faulty sensor reading.

In November, 2019, Boeing said it had completed the first phase of recertification, yet in mid-December, FAA administrator Steve Dickson said that Boeing's timeline was "not realistic."

Boeing's shares slid, as US Treasury Secretary Mnuchin said that the grounding could wipe half a point from the country's GDP in 2020.

American Airlines flew a Boeing 737 Max from Miami to New York on 29 December 2020 with paying passengers on board in the first commercial flight in almost 2 years after the grounding of the aircraft.

Boeing Max returns to US airways: American Airlines flew a Boeing 737 Max with paying passengers from Miami to New York on Tuesday, the plane's first commercial flight in U.S. skies since it was grounded after two deadly crashes. (Dec. 29) https://t.co/pIQTixQEDb pic.twitter.com/HYHbjXp0tK

​In November, 2020 the US Federal Aviation Administration (FAA) rescinded the order that halted commercial operations of Boeing 737 MAX, as long as carriers implement certain design fixes and provide specialised training to pilots.

"Boeing is committed to improving aviation safety, strengthening our safety culture, and rebuilding trust with our customers, regulators, and the flying public," the company said in a statement on the release of the investigative report from the US House Committee on Transportation and Infrastructure (House T&I Committee) Report on 737 MAX, adding that it has learned "hard lessons" from the Lion Air Flight 610 and Ethiopian Flight 302 crashes.

However, investigations, lawsuits, and hearings involving the ill-fated model and the company that built it are expected to continue for years.