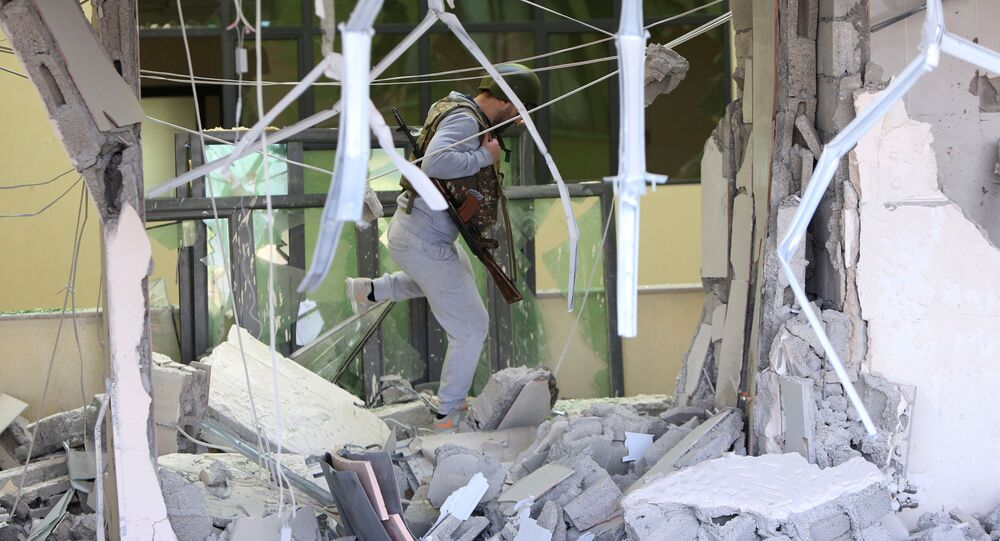 YEREVAN (Sputnik) - Armenian Foreign Ministry spokeswoman Anna Naghdalyan, commenting on a rocket attack by the Azerbaijani Armed Forces on the cities of Stepanakert and Shusha in the unrecognized republic of Nagorno-Karabakh, said that the Karabakh authorities have the right to counterstrike.

According to Armenian Foreign Ministry spokeswoman Anna Naghdalyan, on 3 November, the Azerbaijani military again struck civilian infrastructure in Stepanakert and Shusha with cluster munitions of the Smerch multiple launch rocket system (MLRS), in particular, in the direction of the Center for Maternal and Child Health in Stepanakert. They were injuries reported.

"We declare that in the conditions of the existential threat created for the people of Artsakh [Karabakh], the Artsakh authorities and the Defense Army have the inalienable right to defend their population and counterstrike the enemy," Naghdalyan said in a statement posted on the Foreign Ministry website.

The fighting on the contact line in Karabakh began on 27 September. Armenia and Azerbaijan accuse each other of unleashing hostilities, Karabakh reports artillery shelling of peaceful settlements of the unrecognized republic, including its capital, Stepanakert. Armenia has declared martial law and for the first time a general mobilization, claiming that Turkey is actively supporting Baku. Partial mobilization was introduced in Azerbaijan.

Leaders in Russia, the United States and France have called on opposing sides to end the clashes and commit themselves to negotiations without preconditions.

On 9 October, the foreign ministers of Azerbaijan and Armenia arrived in Moscow at the invitation of Russian President Vladimir Putin, holding joint talks for over 10 hours. As a result, Yerevan and Baku agreed to ceasefire in Karabakh beginning noon 10 October, to exchange prisoners and dead bodies, and also to additionally agree on specific details of the truce. However, later that same day, the sides accused each other of ceasefire violations.

A second attempt to organize a humanitarian ceasefire was made overnight to 18 October, however, just a few hours after the ceasefire came into force, Armenia and Azerbaijan said that the other side was not complying.

The conflict in Nagorno-Karabakh began February 1988, when the Nagorno-Karabakh Autonomous Region announced its secession from the Azerbaijani Soviet Socialist Republic. During armed confrontation in 1992-1994, Azerbaijan lost control of Nagorno-Karabakh and its adjacent areas. Since 1992, talks have been ongoing on a peaceful settlement of the conflict with the mediation of the OSCE Minsk Group, led by Russia, the United States, and France.