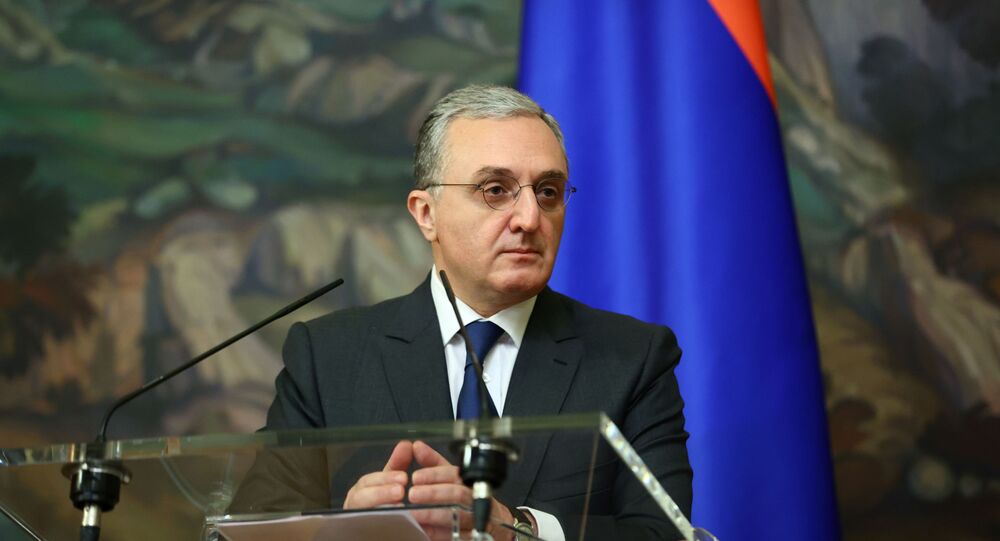 "The Joint statement of October 10 is there, it was reconfirmed also on October 17 and October 25 and there is nothing agreed beyond that text," the minister said.

Aliyev told Haber Turk broadcaster on October 14 that Baku was expecting Armenia to withdraw its forces from Karabakh, where the decades-long conflict flared-up in late September.

According to the senior official, Yerevan supports deployment of ceasefire observers in Nagorno-Karabakh but does not believe that Baku is interested in a sustainable ceasefire.

“Armenia has been always supportive of the idea of permanent ceasefire monitoring which was introduced in the peace process by the OSCE Minsk Group Co-Chairs immediately after the 2016 April escalation,” the minister said.

According to Mnatsakanyan, Armenia and Azerbaijan agreed to the expansion of the OSCE  monitoring team and ceasefire investigation mechanism, but Azerbaijan later “ refused to implement this agreement.”

“This indicates that neither yesterday nor today Azerbaijan is interested in a sustainable and verifiable ceasefire. Our position is unchanged and we support the deployment of observers,” the foreign minister said.

There have been two other attempts at ceasefire since then, one of them brokered in Washington, but the two sides reported breaches soon after each of the agreements.

On Turkey's Role in the Karabakh Conflict

Turkey is continuing to send militants from Syria and Libya to Nagorno-Karabakh amid the ongoing clashes between Azerbaijan and Armenia in the disputed region, the minister noted.

"There is overwhelming factual evidence on the presence and ongoing transfer of foreign terrorist fighters by Turkey from Syria and Libya, which is confirmed by the intelligence of the OSCE [Organization for Security and Co-operation in Europe] Minsk Group Co-Chairing countries and coverage from the conflict zone itself," Mnatsakanyan said.

The latest developments show that Turkey, a long-term ally of Azerbaijan, is not acting impartially in the ongoing conflict, the foreign minister stated.

"No one can assert that Turkey has been acting as an impartial or neutral player in the context of the NK [Nagorno-Karabakh] conflict, including Turkey itself," Mnatsakanyan stated.

The foreign minister said that Ankara's actions indicate that the Turkish government is seeking to exploit the ongoing conflict in Nagorno-Karabakh in order to assert its power in the region.

"Turkey views this conflict as an opportunity to project its power in yet another neighbouring region - the South Caucasus - and this attitude of exploiting conflict and inflicting enormous human suffering on peoples of the region for the sake of power projection should be countered not encouraged," Mnatsakanyan added.

French President Emmanuel Macron said in early October that 300 Syrian militants had been sent to Baku via the Turkish city of Gaziantep. Russian Deputy Foreign Minister Mikhail Bogdanov said in mid-October that Russia was raising the issue of foreign mercenaries in Karabakh in its talks with Turkey.

Turkish officials and lawmakers have refuted allegations of Ankara sending mercenaries to Nagorno-Karabakh.

Azerbaijan is delaying the creation of a ceasefire verification regime in Nagorno-Karabakh, while Armenia and Russia are consulting on potential verification mechanisms, the minister said.

“The main diverging issue at the negotiations was the reluctance of Azerbaijan to commit to a sustainable and verifiable ceasefire,” Mnatsakanyan said.

According to the foreign minister, Baku has been refusing to set up verification mechanisms in order to continue “the blame game.”

“At this moment there are consultations between ministries of defence of the Russian Federation and Armenia on the verification mechanisms. So far Azerbaijan refuses to engage constructively in elaborating parameters of the ceasefire and continues large-scale military activities,” the foreign minister added.

Any potential peacekeeping mission in the disputed region of Nagorno-Karabakh, where armed clashes have been reported since late September, should involve the participation of impartial countries that have not played a role in stoking the conflict, Mnatsakanyan said.

"But what can be emphasized from the beginning is that any peacekeeping arrangement cannot include those who, in words and deeds, act not as a neutral side but as a party to the conflict," the Armenian foreign minister said.

Peacekeepers deployment was mentioned in the OSCE Budapest Summit decision of 1994, which tasked the High-Level Planning Group (HLPG) to develop a plan for the establishment, force structure requirements and operation of a multinational OSCE peacekeeping force in Nagorno-Karabakh.

Yerevan supports deployment of ceasefire observers in Nagorno-Karabakh, but does not believe that Baku is interested in a sustainable ceasefire, Armenian Foreign Minister Zohrab Mnatsakanyan said.

Russian Foreign Minister Sergey Lavrov said on October, 14  that Russian military observers should be present in the region, but the final decision was up to the parties to the conflict. According to Lavrov, “not even peacekeepers, but military observers would be enough.”

“Armenia has been always supportive of the idea of permanent ceasefire monitoring which was introduced in the peace process by the OSCE Minsk Group Co-Chairs immediately after the 2016 April escalation,” the minister said.

According to Mnatsakanyan, Armenia and Azerbaijan agreed to the expansion of the OSCE  monitoring team and ceasefire investigation mechanism, but Azerbaijan later “ refused to implement this agreement.”

“This indicates that neither yesterday nor today Azerbaijan is interested in a sustainable and verifiable ceasefire. Our position is unchanged and we support the deployment of observers,” the foreign minister said.

"Iran is a very important country in our region and unlike Turkey it has a responsible and constructive stance when it comes to regional security and peace. At the same time, the Minsk Group Co-Chairmanship is the only internationally agreed format of mediation and negotiations, whose role was confirmed in the Joint Statement of October 10 and consecutive statements of October 17 and October 25," the Armenian foreign minister said.

Earlier in the day, Iranian Deputy Foreign Minister Abbas Araghchi said Tehran had a new plan for the Karabakh crisis, which envisions “termination of the occupation, respect for the territorial integrity and sovereignty.” Araghchi argued that the Minsk group had been inefficient. On October 13, the Iranian government said Tehran was ready to become a mediator in the conflict.

'Armenia In Close Communication With CSTO on Situation in Karabakh'

Armenia is in close communication with the Collective Security Treaty Organization (CSTO) and its member states regarding the situation in Nagorno-Karabakh, Mnatsakanyan said.

"Armenia continues close consultations both with the CSTO and CSTO member states and informs its allies on the situation on the ground," the minister said.

CSTO members, apart from Armenia, include Russia, Kazakhstan, Kyrgyzstan, Tajikistan, and Uzbekistan. The military alliance is expected to defend its members if they are being attacked. An issue of Armenia potentially asking for CSTO’s help has been raised by journalists, but so far neither CSTO, not Armenia have confirmed that there was such a request. The Kremlin said in early October that the obligations to defend CSTO members in case of attack covered Armenia, but not Karabakh.