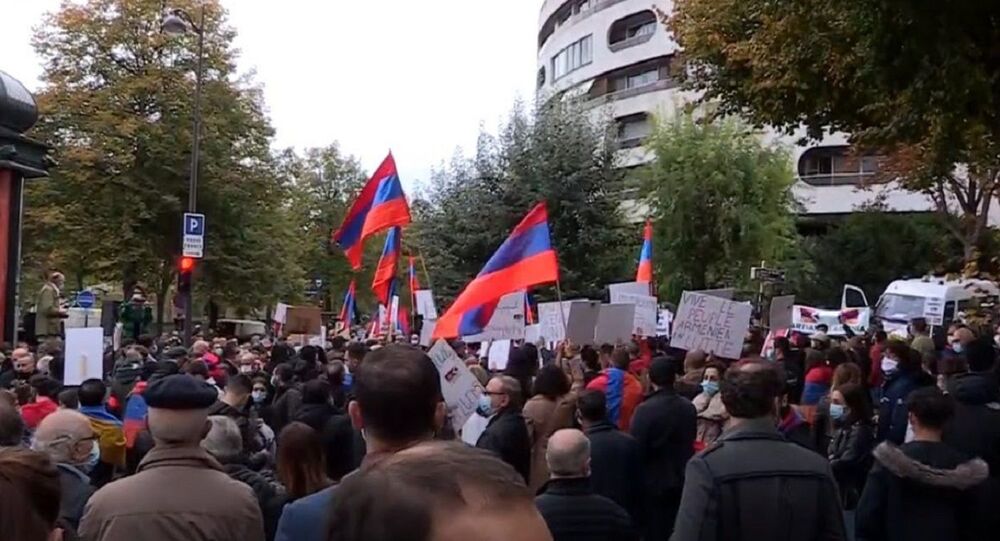 MOSCOW (Sputnik) - Representatives of Armenian and Turkish communities clashed in France's eastern department of Isere during a demonstration by Armenian diaspora in support of the self-proclaimed Nagorno-Karabakh republic, national media reported on Wednesday.

According to Le Dauphine Libere newspaper, since Wednesday morning, participants in the demonstration initiated by the Armenian community have blocked traffic on the A7 highway calling for the recognition of the independence of the Nagorno-Karabakh republic, also known as Artsakh.

Clashes between two communities started when representatives of the Turkish diaspora came to the scene of the demonstration. Four people were injured during the confrontation, the paper reported.

Photos and videos from the scene where the reported clashes took place have been posted online.

And they attacked one of the Armenians with an ax and ran away like cowards https://t.co/Mec7TVydLl pic.twitter.com/0sv1SPNGVW

​Meanwhile, police have sent reinforcements to the area and have also started blocking access to the area where the demonstration is taking place.

The demonstration comes amid a fresh escalation in the long-lasting Nagorno-Karabakh conflict that began on 27 September. Armenia and Azerbaijan have accused each other of starting the military action. The international community strongly condemned the escalation and called on parties to settle the differences via dialogue, however, Turkey has pledged its full support for Azerbaijan.

Since the outbreak of hostilities last month, Armenian communities across the world have been holding peaceful demonstrations calling on the international community to recognise Artsakh as an independent nation in order to restore peace in the region.