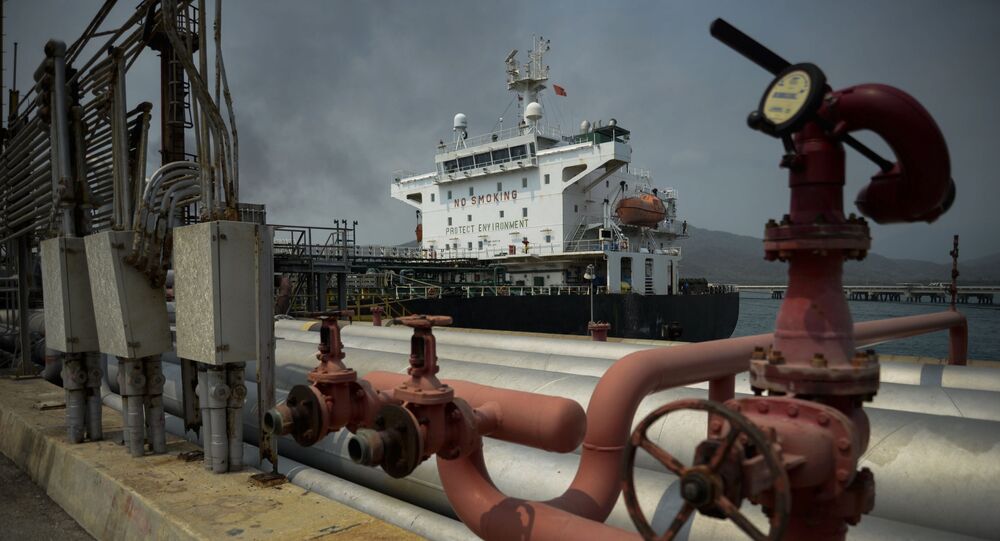 Two out of a flotilla of three Iranian-flagged tankers arrived in fuel-starved Venezuela on 29 and 30 September, as the South American state boasting the world’s largest oil reserves, was forced to close gas stations across the country due to shortages, triggering protests among the population.

Venezuela has received a fresh shipment of much-needed fuel as the final vessel in a flotilla of three Iranian tankers entered the South American nation’s waters on Saturday.

The tanker Faxon, carrying around 234,000 barrels of fuel, was shown to be directly north of Venezuela’s Sucre state as of 9:37 a.m. local time (1:37 p.m. GMT) on Saturday, according to Refinitiv Eikon data, cited by Reuters.

Earlier, on 29 and 30 of September, the tanker Forest with 275,000 barrels of gasoline on board and the Fortune entered Venezuelan waters, Russ Dallen, the head of the Miami-based investment firm Caracas Capital Markets, who tracks Venezuela shipments, was cited by the AP news agency as saying.

​While no information was offered regarding how much gasoline the Fortune and the Faxon were carrying, Dallen was cited as saying the flotilla would deliver a total of 815,000 barrels of fuel to Venezuela.

Dallen suggested that the Iranian shipments will likely provide only short respite from the nation’s shortages.

“Ultimately, Venezuela cannot continue buying all the gasoline needed as it doesn't have enough money. So, Venezuela gets gas temporarily and Iran gets a little money or gold - it is not yet a sustainable business," said Dallen.

The flotilla is the second group of fuel tankers Iran has sent this year to the once-prosperous OPEC nation that is struggling to deal with gasoline shortages.

Between May and June, five Iranian tankers are said to have delivered more than a million barrels of oil to Venezuela.

While the country whose proven oil reserves are recognized as the largest in the world still produces crude, it needs to import gasoline as its own production is a form of heavy sulphur oil.

Venezuela, due to US sanctions on state oil company Petroleos de Venezuela (PDVSA) and ensuing underinvestment and lack of maintenance at its refineries, does not have the capacity to refine it.

The shortages of fuel have resulted in sometimes days-long lines outside PDVSA gas stations, prompting a fresh wave of discontent among the population.

Around 100 street demonstrations flared up in remote towns over the last week, according to The Associated Press.

The arrival of the tankers is seen as the latest sign of cooperation between two countries struggling under US-imposed sanctions.

​Washington started introducing harsh economic sanctions against the Venezuelan economy, which is in the grip of an ongoing crisis, in 2018, in an effort to oust democratically elected President Nicolas Maduro.

A predominant part of the sanctions targeted the PDVSA and its subsidiaries. The move was calculated as a means of seizing PDVSA’s foreign assets and preventing it from completing transactions.

© REUTERS / Marco Bello
El Palito refinery which belongs to PDVSA is seen in Puerto Cabello, in the state of Carabobo, March 2, 2016. REUTERS/Marco Bello

Recently, the US slapped new sanctions against Maduro due to his cooperation with Tehran. Iran’s oil industry is also under US sanctions over the country’s nuclear program.

Washington reinstated its restrictive measures against the Islamic Republic in May 2018, when President Trump announced his country’s unilateral withdrawal from the 2015 Iran nuclear deal, also known as the Joint Comprehensive Plan of Action (JCPOA), citing Tehran’s alleged violations of the accord.

The move prompted Iran to start suspending some of its JCPOA-related obligations exactly a year later.