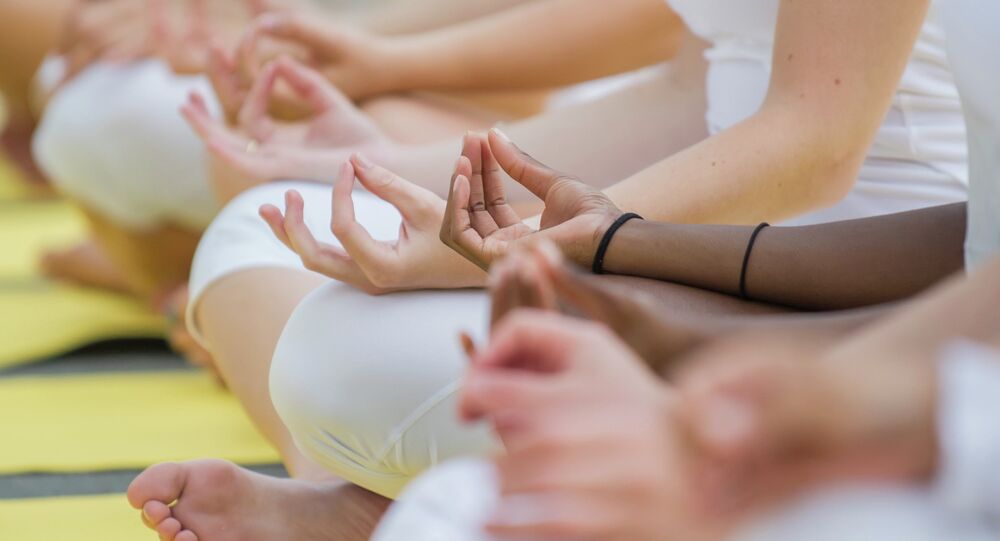 New Delhi (Sputnik): Flashy fitness applications have bombarded enthusiasts with an array of workout options ranging from HIIT, Boxing and Pilates, to all forms of Yoga; millions remain cooped up in homes with their minds full of anxiety and added self-doubt due to binge munching. On International Yoga Day lets explore what's best in today's world.

In the age of Instagram, which has triggered the fad of flaunting chiselled bodies at the cost of exhaustive workouts and dieting, the sudden arrival of the COVID-19 pandemic has thrown open a debate on whether fitness is limited to flawless bodies. Is building one's immunity key to holistic health?

Experts point out that pumping iron at flashy gyms may make fitness enthusiasts ecstatic by sending dopamine and endorphins into the blood system, while contributing to weight loss, but the effects are short term. Shreystha Beppari, Applied physiologist, Author and Wellness Coach, advocates yoga as a more long-term and holistic approach to attaining the highest level of physical and mental health.

Yoga, which traces its origin to more than 5,000 years ago, was originally practised by ascetics in India. In order to introduce this ancient practice to the world, Indian Prime Minister Narendra Modi proposed the idea of celebrating International Yoga Day on 21 June at the United Nations General Assembly in 2014.

A Journey from Zumba to Yoga

Jyoti Kaundinya, who started her fitness journey with Zumba 11 years ago but switched to yoga to achieve mental peace, says that there is no guarantee that achieving one's ultimate physical goals will make one happy within. Yoga is a union of mind, body and soul which practitioners use to awaken their consciousness from within.

“I was fat as a kid and grew up to become overweight. Zumba and gymming did give men the desired body shape but not satisfaction of mind. It was not as gratifying as I thought it to be. I really wondered what was wrong,” says Jyoti.

She later dwelt into the dark and suffered anxiety, stress and mental health-related issues. It was then when she was drawn towards meditation and yoga to connect with a higher consciousness.

Yoga is more than mere happiness of looking four kilograms lighter on the weighing scale, or a hot bikini body or abs. These things are transitory and also, achievable through yoga, Jyoti adds.

Lifting each other up and being positive is also very important to keep higher frequencies going in the body to help us clear our energy. The power of your thoughts are also very crucial !!!!! Make sure you’re sending good vibes out there no matter what …. God will do the rest.

“I began my yoga journey with meditation and started exploring other forms of this ancient practice. I started doing vinyasa flow which is energetic, synchronising breath with movements. The combination of physical fitness and mental fitness was brilliant and it was life-changing. For me, it was like a union of mental, physical and spiritual health.”

No! Yoga is not Slow and Boring

Over time, it has evolved from the most widely practised Hatha (meaning sun and moon) yoga to Ashtanga - a vigorous flow from posture to posture. Then there is Bikram, which has won fans from Beverly Hills and throughout the world since the late 1970s, which involves sweating buckets while standing on one leg in a sauna.

Alternatively, there is Kundalini yoga, which energises the loins, and makes use of synchronised breathing.

Hollywood and Bollywood celebrities have also sworn allegiance to the ancient practice. Madonna, Miley Cirus, Jennifer Lopez, David Beckham and Jessica Biel are among those who have embraced it, while Bollywood's Shilpa Shetty, Malika Arora and Sushmita Sen share their yoga experiences through their Instagram feeds.

Yoga for me is that one hour to myself that I never miss. So as we count down to #InternationalYogaDay I want to share something fun with you’ll - #14Days14Asanas Each day, I’ll be putting up one asana that I absolutely love and practice regularly and I’d love for you’ll to do the same asana, click a picture, tag me, @sarvayogastudios, @thedivayoga and #14Days14Asanas Today’s asana is ’Sarvangasana’ - Lie down with your back on the floor, and palms close to your body - Lift your legs and bring them close to your heart - Lift your lower body slowly and place your hands on your lower back, keeping your elbows close to the torso - Slowly lift your legs up, forming a straight line with your forearm - Breathe normally without any pressure on your neck - To come out of the pose, fold your knees, bring your legs close to the chest and slowly release your hands I’m super excited to see how beautifully you all do this asana, do not forget to tag me and #14Days14Asanas #internationalyogaday #sarvayoga #divayoga #mylifemyyoga #fitindiamovement #malaikasmoveoftheweek

“It is one of the most beautiful experiences once you start yoga,” says Jyoti, “for hyperactive people, who love dancing and doing a high-intensity workout, it is hard to keep control over your body and sometimes even the postures are not right, which can lead to injuries. But Yoga combines physical workout with meditation which allows you to face your fears as it’s a way to delve deeper within and monitor your thoughts,” she adds.

Experts say the best approach is to divide the days between the two forms while keeping meditation a constant phenomenon.

“It is mandatory to focus on diet for weight loss and one can opt for strength training and cardio to lose out fat. Yoga is necessary to sustain that body. I feel that the person should have a combination of the two forms of exercises,” says wellness coach Shreystha.

She adds that working out at the gym and other workout routines have limitations with people of a certain age group, adding that someone older than 50 may not be able to work out or lift weights as the bones and muscles start to give out.

Yoga trainer Trivedi Ashish warns that rigorous gym workouts and weightlifting can result in arthritis in old age, whereas yoga helps in curing several diseases as well as the problem of arthritis.

“It is known that maximum professional players and wrestlers suffer arthritis due to years of rigorous training which puts stress on joints. A person who does real yoga, not adulterated with other forms of exercise, will never have arthritis. Yoga is a complete package working on mental, physical and psychological aspects of the body, having calming effects on muscles, joints and body in the long term.”

It was a transition from north to south for Jyoti, who has found her calling and her passion for dancing. She explains that the rush we feel with high-intensity workouts is short term; the ecstasy settles down within a few hours of the rigorous calorie burnout. This, she explains, is because we are not reconnected to ourselves.

“It is one of the most beautiful experiences once you start it,” she says, “for hyperactive people, who love dancing and doing a high-intensity workout, it is hard to keep control over your body and sometimes even the postures are not right, which can lead to injuries,” she said.

Jyoti explains that meditation makes you face your fears as it’s a way to delve deeper within and monitor your thoughts.

“It is opening up your body, your chakra, your heart, your mind. And the more you run from your fears, the more they're going to chase you and in the worst way possible. So that's what yoga does. It makes you face your fears and helps you to open up and gives you a new perspective.”

The perception that yoga is boring is because people want instant results but that is not possible in any form of exercise, even if the result is short-lived, says wellness coach Shreshta.

“For a person weighing 90 kilos, slimming down to 67 will take a couple of months. Yoga is the bug you can't ignore for holistic health.”

Twist it like Modi: Indian PM Shares Animated Videos of Him Doing Yoga to Inspire People in Lockdown