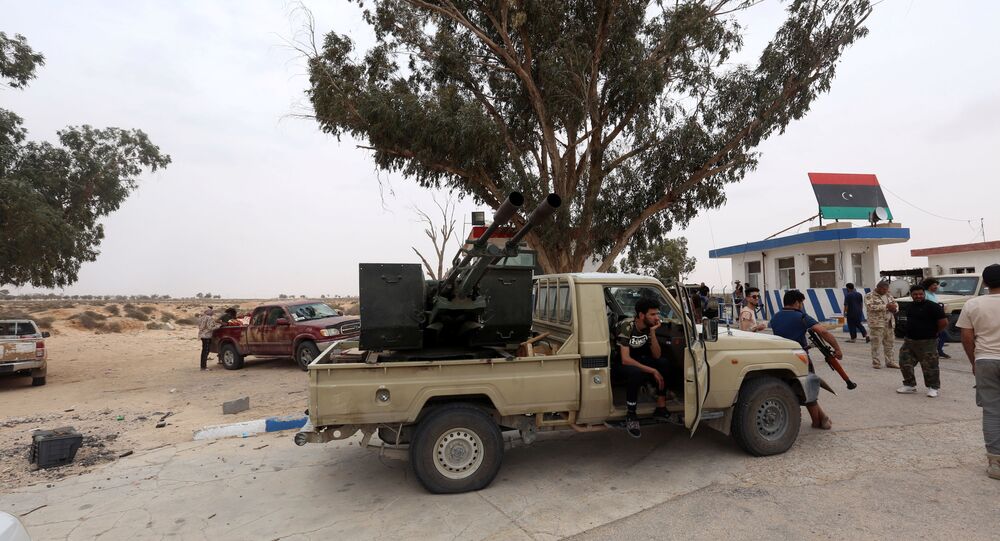 Turkey deployed combat troops to Libya earlier this year, and has provided large amounts of military equipment to the Tripoli-based Government of National Accord (GNA) for its war against General Haftar's Libyan National Army (GNA). Moscow is seeking to facilitate a political settlement to end the long-running Libyan civil war.

Turkey and Russia are working toward establishing a ceasefire in Libya, and have no major disagreements on the issue, Foreign Minister Mevlut Cavusoglu has announced.

"We don't have any problems in our discussions with the Russians...No, that's not the issue. But a ceasefire that can bring Libya to a political process - we need more discussions to make that possible. Only after those are clarified can we come together at the ministerial level and sign a joint document," Cavusoglu said, speaking to reporters during a meeting with Iranian officials on Monday.

According to the foreign minister, he spoke to Russian Foreign Minister Sergei Lavrov twice by telephone on Sunday, with the ministers agreeing to postpone a planned face-to-face meeting between Lavrov, Russian Defence Minister Sergei Shoigu, and Turkish officials until discussions at the expert level on the Libyan issue were completed.

"There is no other aspect to it...we have no significant disagreements. Of course, we are on different sides, yes. But when it comes to a ceasefire, there are no different opinions, there is no crisis or anything of that sort which caused the postponement," Cavusoglu assured.

Earlier, a Turkish official told Reuters that Lavrov and Cavusoglu had postponed planned talks due to the GNA's ongoing offensive to take the strategic coastal city of Sirte from Haftar's forces, a week after Egyptian President Abdel Fattah Sisi announced a Cairo-backed initiative for a ceasefire between the two warring parties.

Russia and Turkey in Libya

Russia established diplomatic ties with the eastern Libyan Tobruk-based government in 2015, and has praised the LNA forces' efforts to root out terrorist militias and armed gangs operating throughout much of the war-torn country following the overthrow of Libyan leader Muammar Gaddafi in 2011. At the same time, Moscow has refused to provide the LNA with weapons shipments directly, pointing to the UN arms embargo against the nation. Haftar has visited Moscow on several occasions to discuss the crisis in the country, with Russian officials repeatedly calling for dialogue between Tobruk and Tripoli to resolve the long-running crisis.

© Photo : Screenshot from LNA presentation.
Libyan National Army Spokesman Accuses Turkey of Violating UN Arms Embargo
Turkey has provided considerable support to the Tripoli government, delivering at least eight multiple launch rocket systems, 10 strike drones, 70 Kirpi and Vuran armoured vehicles, and over 260 Turkish-made all-terrain vehicles to the country, according to LNA data. Ankara announced the deployment of ground troops in the country earlier this year in a bid to stop the LNA's offensive to take Tripoli, with Haftar's forces estimating that as many as 1,500 Turkish troops and security contractors, and thousands of radical fighters from Syria, have been transferred to the war-torn nation in recent months.

Libya collapsed into chaos and civil conflict soon after the overthrow of Muammar Gaddafi with the support of NATO airstrikes in 2011. After that, dozens of competing militia and terrorist groups, criminal gangs and human smuggling groups popped up throughout the country. In the years that followed, the GNA and the Tobruk-based government consolidated themselves into the two major forces competing for control over the oil-rich nation, with repeated efforts to reach a political settlement; the most recent took place in Berlin in January, and failed.

The LNA began an offensive to take Tripoli in April 2019. The offensive slowed, and then sputtered to a halt earlier this year following the Turkish intervention, and the LNA warned that "all Turkish targets in occupied areas of Libya" would become "legitimate targets" if Turkey did not withdraw its forces immediately. This week, Turkish media reported that Ankara had plans to set up two permanent military bases in Libya.