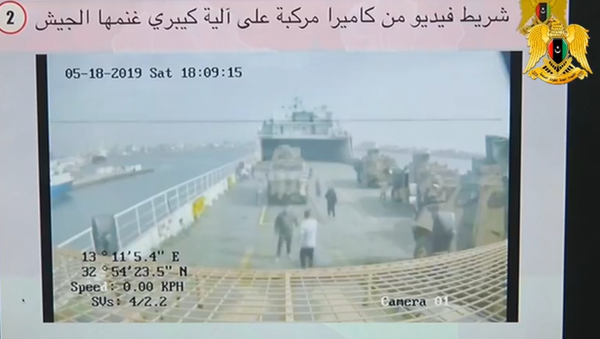 © Photo : Screenshot from LNA presentation.
Subscribe
The allegations came the same day that Gen. Khalifa Haftar’s forces warned Ankara that Turkish forces "illegally operating" in Libya would be subject to destruction in a massive aerial campaign. The Turkish Foreign Ministry warned that such an attack would make Libyan National Army (LNA) troops a “legitimate target” for Turkish forces.

Turkey’s military operations in Libya constitute a violation of the UN arms embargo and are a threat to regional peace and stability, Ahmed al-Mismari, spokesperson for the Libyan National Army, has claimed in a 25 minute-long multimedia presentation aiming to show the alleged extent to which Turkish forces are involved in the war in the North African country.

“Breaking the international embargo [on arms] which was supposed to guarantee the development of the peace process in Libya, Turkey is quite openly sending hundreds of armoured vehicles, artillery, unmanned aerial vehicles, heavy machine guns and other offensive weapons into our country, as well as massive amount of ammunition of various calibres which are killing our citizens,” al-Mismari said in a briefing held Thursday.

According to the spokesman, Turkish troops, mercenaries and Government of National Accord (GNA) forces have received and are operating at least eight T-107 107mm multiple launch rocket systems, 10 strike drones, about 70 Kirpi and Vuran armoured vehicles, over 260 Turkish-made all-terrain vehicles, along with over 100 heavy machine guns.

As evidence of these weapons deliveries, the spokesman pointed to what appears to be dashcam footage from inside a Kirpi vehicle being loaded up onto cargo ships and sent to Libya.

“On the screen you can see footage from the video recorder of one of the Turkish ‘Kirpi’ armoured vehicles captured by Libyan troops during battles with members of terrorist groups from Syria which were deployed south of Tripoli,” the spokesman said. He added that an analysis of the vehicle’s navigation system and video recorder has made it possible to determine that it was produced in a military factory in the city of Izmir in early 2019.

“On the 15th of May, a batch of these vehicles was transported into Tripoli, including this very vehicle, which arrived in Tripoli on the 18th of May, 2019. It was put in one of the hangers which has been set up specifically for this purpose, which means that [President Recep Tayyip] Erdogan has been preparing for this attack on Libya since last year,” al-Mismari alleged. 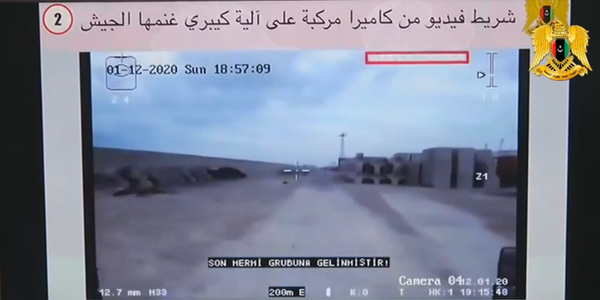 Further, al-Mismari said, the footage shows "Turkish instructors" training militants in the operation of the equipment, including video from January 11, 2020 of a driving lesson, with the vehicle delivered to its final destination – Maytiga International Airport, on March 17, 2020, and used since March 21 in attacks on LNA forces by alleged “Syrian and Turkish mercenaries.” 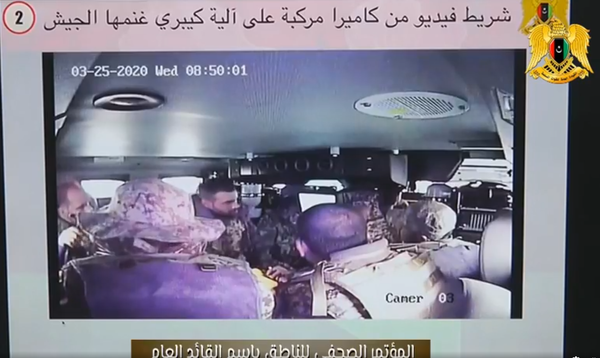 “This video is solid proof that Erdogan has been breaching international agreements regarding Libya...This attack, this invasion is happening under the false agreement with the Government of National Accord,” the spokesman said, referring to the UN-backed and US-supported Libyan government. “This puts the freedom and sovereignty of our nation in danger, which mandates that we fight.”

The LNA estimates that there are roughly 1,500 Turkish troops and private security contractors operating in the country, with intelligence that Turkey is planning to send 2,500 more commandos and special ops troops to Libya.

“Turkey has transported over 17,000 individuals [to Libya]…Only in the last week there were 34 flights from Ankara to Tripoli or Misrata,” the spokesman said, pointing to footage of armed men in military fatigues in the interiors of aircraft and persons on the ground, purportedly in Libya. 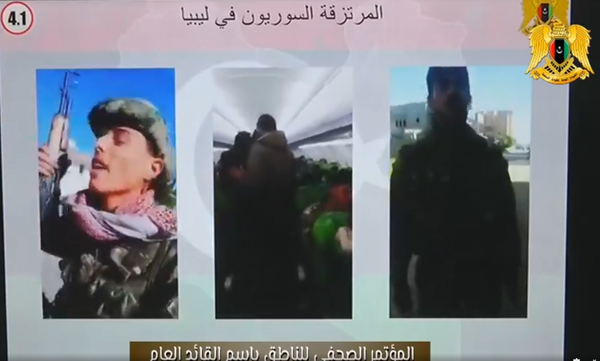 Screengrab of multiple videos of alleged mercenary troops being flown to and operating in Libya from Turkey.
© Photo : Libyan National Army presentation

“In the next video you will see the extremists and the terrorists fighting with Turkish munitions, and Turkish weaponry and being paid by Libyan money through Turkey,” al-Mismari said. 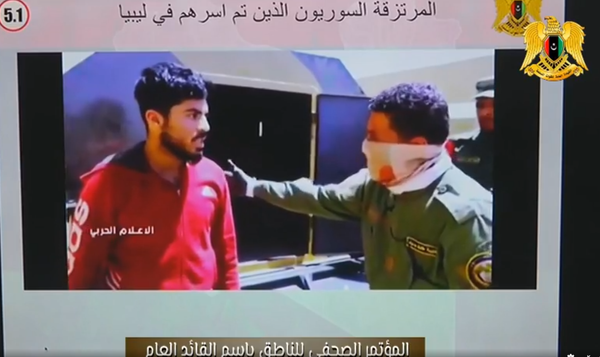 In Thursday's presentation, Al-Mismari also accused the UN of turning a blind eye to the situation in Libya, noting that “we have never heard any statements from the United Nations decrying Turkish involvement. Turkey and its weapons have never been mentioned in a United Nations report. They have also never mentioned the Syrian or any other mercenaries at all…We urge the United Nations to condemn Turkey’s flagrant violation of international agreements on the Libyan settlement, and to examine the evidence we have provided regarding the Turkish aggression against the Libyan people,” he said.

“We ask UN agencies to conduct an investigation on the mechanisms through which Turkey delivers lethal weapons and military equipment to Libya…We expect the UN Secretary General, the African Union, and the European Union to take account of today’s press conference," al-Mismari noted.

Turkish officials have not commented on the LNA spokesman's presentation or the claims made within. Ankara has made no secret of its support for the GNA government, however. On Friday, Turkish media reported that presidential spokesman Ibrahim Kalin had spoken with US National Security Advisor Robert C. O'Brien and reiterated both countries' support for the GNA, while highlighting the need to halt the Tripoli offensive by Gen. Haftar's forces.

Libya has been mired in a deadly nine year, foreign-backed civil war since the overthrow and public execution of long-time leader Muammar Gaddafi by rebels backed by NATO airpower in 2011. Since then, the North African nation has been divided among competing militant groups, terrorists, criminal gangs and human smugglers. More recently, the Tobruk-based parliament, which has the support of Gen. Haftar's Libyan National Army, and the Tripoli-based Government of National Accord have consolidated themselves as the two rival political and military powers in the war-torn country, and began fighting to establish total control. In April, 2019, after defeating many smaller rebel groups and Islamist terrorist forces, the LNA began an offensive on Tripoli. In January 2020, Turkey confirmed that it had deployed a limited contingent of combat troops to support the GNA. Repeated efforts to resolve the conflict have failed to lead to a lasting peace. In January, officials from Russia, the US, the European Union, Turkey, Egypt and other nations met in Berlin to try to hammer out a peace plan with GNA and LNA (Tobruk government) representatives, but to no avail.