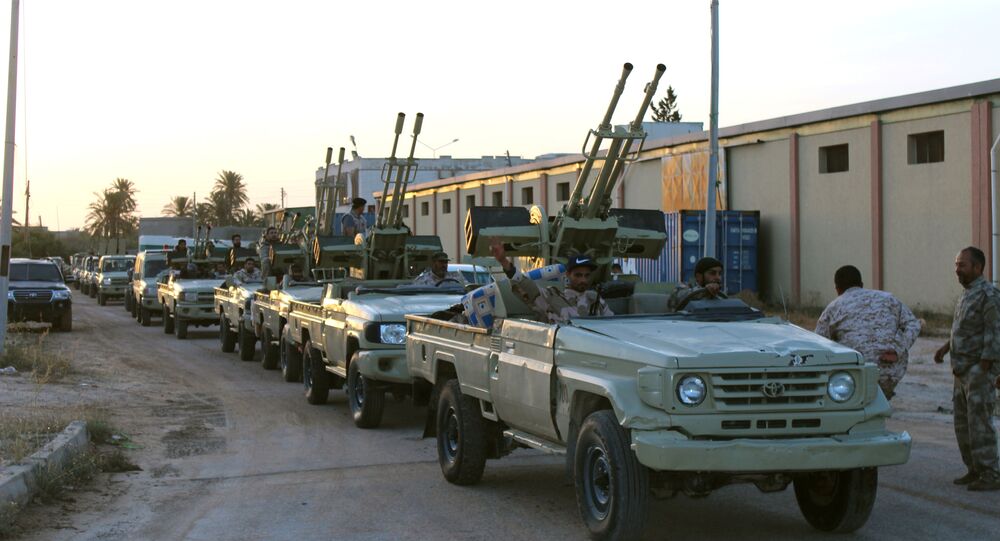 BENGHAZI, Libya (Sputnik) - As violence returns to Libya, Syrian foreign mercenaries get caught in the crosshairs between Tobruk and Tripoli, but instead of hardened warriors, they cut out a sorry figure.

"We were deceived, we did not come to participate in any war, we came to guard Turkish facilities for the money ... but in the end, I am left without any cash" — this phrase embodies the common denominator of the stories of the Syrians who arrived in Libya "to earn money .. not to fight".

Sputnik was able to speak to some Syrian mercenaries captured by the Libyan National Army (LNA) in recent fighting around Tripoli, getting a first-hand account of how they came to fight in the wars of others.

© REUTERS / Esam Omran Al-Fetori
Haftar's LNA Announces Ceasefire in Libya During Holy Month of Ramadan
In mid-January of this year, media outlets around the world ran headlines of the arrival of hundreds if not thousands of mercenaries from Syria to the Libyan capital of Tripoli to fight alongside the Government of National Accord (GNA) at Turkish orders.

LNA Commander Field Marshal Khalifa Haftar, in a February interview with Sputnik, said that Turkey using the Tripoli-Tobruk ceasefire to shore up its support for LNA Prime Minister Fayez al-Sarraj was a violation of the truce.

"Unfortunately, a temporary ceasefire is being used by Turkey and the Sarraj government to transfer a large number of Syrian mercenaries, Turkish soldiers, terrorists, and weapons to Tripoli by sea and air. It is a violation of the ceasefire", Haftar said.

From the Horse's Mouth

The stories which the captured Syrians told Sputnik paint them less as trained guns-for-hire — as the term "mercenary" would suggest — but as cash-strapped young men coerced into fighting foreign wars after becoming veterans of their wars at home.

Similar themes of deception and luring with promises of money can be seen in the stories, blunt tools used against young men whose lives have been marred by war.

Mohammad Adawi, captured by the LNA in the Abu Salim district of Tripoli, said that he was subject to a discrepancy between job description and job expectation.

Adawi, who claimed to have been among the ranks of the Turkish-backed Free Syrian Army, said that the protests his brethren expressed were met with detentions and oppression.

"We came to Libya on the basis of a contract of employment for guarding Turkish facilities in Libya, but everyone was shocked by reality after we arrived in Libya. About 190 people went out and rebelled after finding out that they will fight in Libya... unfortunately most of them were imprisoned", Adawi said.

Another Syrian captured by the LNA, Mohammad Masri, detailed how the deception came down the chain of command of Syria’s anti-government rebels.

"The Turkish had obligated the leaders of the Syrian factions to force Syrians to spend a three-month work contract in Libya, and then they would return to Syria. They told us you go for a three-month contract and then return, and you are tasked with guarding oil fields", Masri detailed. "They told us the contract is $2,000 dollars, but after we arrived, there was no $2,000 or anything. All of it was empty talk".

Deer in the Headlights

Masri stressed that he did not participate in any armed confrontation against the LNA as he claims to have been assigned at a Tripoli observation post just three days before it was captured by Haftar’s men.

"No, they did not tell us that we will fight in Libya. They told us that they had a contract to guard oil fields", Masri repeated when pressed about how he found himself over 1,200 miles away from his home country.

According to Adawi, the prospect of serving three months and then finding one's way to Europe with some cash in hand was a motivator for many young men to sign up.

"There are people who thought that they would come to Libya in order to take this amount and then move to another country as an illegal immigrant. Many people think this way", Adawi said.

Those plans never came to pass as the men were captured before they saw a dime.

For its part, Tripoli has never denied nor confirmed the presence of Syrian mercenaries in Libya.

"We do not hesitate to cooperate with any side to confront aggression", Sarraj said in response to a question about the accuracy of information about the presence of Syrian mercenaries.

The men were captured as part of a fresh wave of violence that returned to the beleaguered nation late last month.

Haftar announced self-rule over all of Libya and a withdrawal from the Shkirat agreement, which had led to the formation of the GNA in 2015 and the internationally brokered ceasefire agreement agreed upon in Berlin in January of this year.