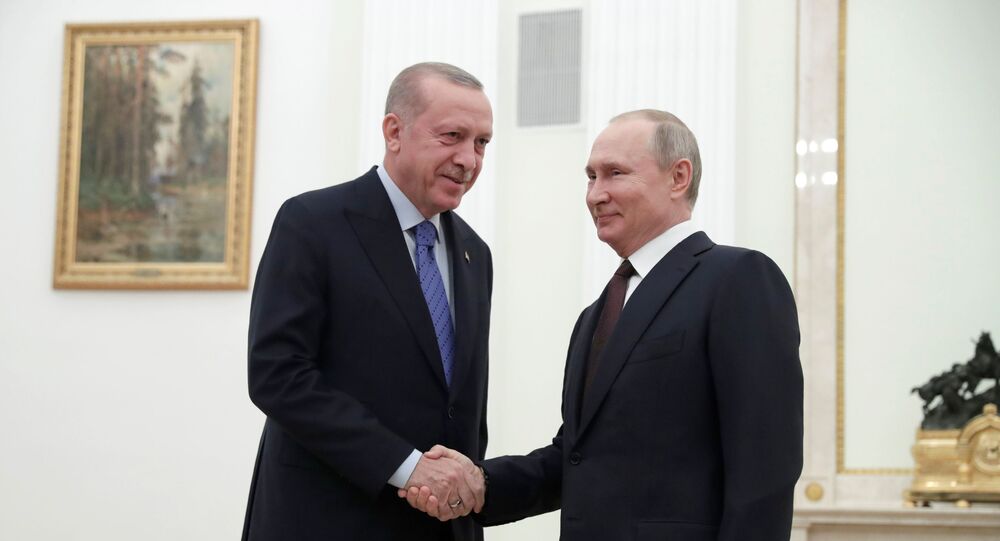 The Russian and Turkish presidents have met in Moscow to discuss the recent escalation of tensions in Syria's Idlib province. The flare-up was triggered by intensified attacks by local terrorists against Syrian forces and latter’s retaliatory strikes, in which Turkish troops were caught in the crossfire, resulting in casualties on their part.

Russian President Vladimir Putin announced that he has negotiated an agreement to resolve the ongoing tensions in Idlib province with his Turkish counterpart Recep Tayyip Erdogan. The two countries have agreed following "uneasy, but productive" talks that they should not reduce their efforts in the fight against terrorism and reaffirmed their adherence to the Astana format for resolving the crisis in Syria.

Turkish President Recep Tayyip Erdogan stated that his country will be sending additional forces to Idlib province under a new agreement with Russia, but that the status of Turkey’s Operation Spring Shield will be "changed". Erdogan added that starting at midnight between 5 and 6 March a ceasefire regime will be established in Idlib for both Turkish and Syrian forces. The Turkish president said that the army reserves the right to respond to any hostile actions of the Syrian forces, but assured that otherwise Turkish troops will simply be monitoring that the ceasefire regime is abided by.

"We have established observation posts to reduce tensions in Idlib. These posts have pledged to only monitor the ceasefire regime's implementation, but not to control the field", he clarified.

Commenting on the recent events that prompted the escalation of violence in Syria's Idlib, Putin accused militants based in the province of restarting the hostilities in the region, which have led to casualties among the civilian population, the Syrian Army, as well as Turkish forces.

The Russian president added that Moscow doesn't always see eye to eye with Turkey when it comes to Syria, but noted that the two countries have always managed to find common ground in the end.

"Each time, in critical moments, we have always managed to find areas of common interest on existing issues and figured out acceptable solutions to them, while relying on the high level of our bilateral relations", Putin said.

The situation in Syria's Idlib province escalated after local militants and terrorist groups intensified their attacks against the Syrian Army. The latter responded to the attacks, while Turkish troops in the area were caught in the strikes and suffered casualties.

© REUTERS / Kemal Aslan
Putin on Turkish Losses in Syria: No One Knew About Servicemen's Location

The Russian Defence Ministry noted that Turkish forces were not supposed to be in the area targeted by the Syrian Army’s fire in response to attacks by terrorists. President Putin later stated that no one, including the Syrians, were aware that Turkish troops were stationed there.

Obstacle to Help in Idlib? Turkey’s Purchase of S-400s a Serious Concern for US, Envoy on Syria Says